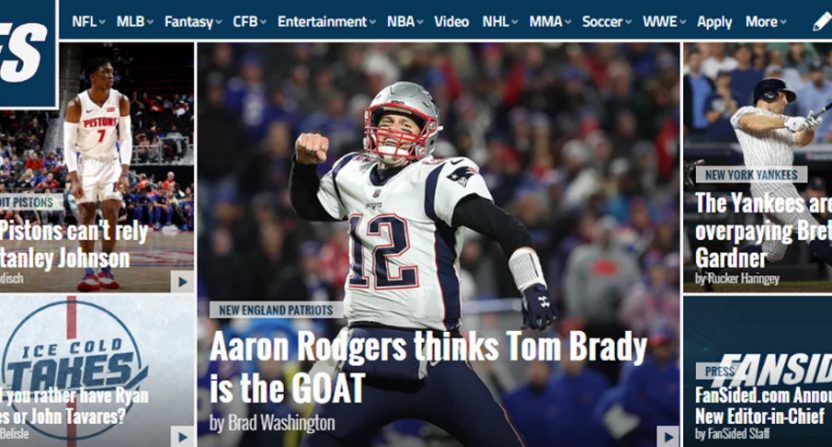 Happy to announce I have joined https://t.co/GLCCkmGX8F as the Editor-in-Chief: pic.twitter.com/6hqUyGFV1v

Some selections from that release:

FanSided announced today that Jason Cole has been named Editor-in-Chief of FanSided.com, effective immediately. In his new role, Cole will manage content and editorial operations for the flagship site, FanSided.com, a premier destination for fans of sports and entertainment.

“Jason is one of the most talented and respected journalists in our industry and we’re thrilled to have him leading our team at FanSided.com,” says Patrick Allen, VP of Content and Strategy for FanSided. Whether it’s breaking news, columns, features or video, Jason has done it all and we’re excited to be adding someone with such a proven track record of delivering great content.”

…“As a former NFL beat reporter I know how much the home team means to its fans,” says Cole. “FanSided has built and grown a powerful platform that connects the most passionate fans to their teams in fresh, original ways. Our priority is to continue to meet that rabid appetite for conversation, debate and enlightenment around the more than 300 communities that we cover, and continue FanSided’s successful expansion into not just new sports communities, but also new corners of the pop culture zeitgeist. There is still so much opportunity to be mined here.”

For using “zeitgeist” unironically in a release, we award Cole no points, and may God have mercy on his soul:

But beyond that, this is an interesting hire. Cole currently teaches journalism at the University of Florida, and he has a long history of NFL coverage, working for the (Fort Lauderdale) Sun-Sentinel and The Miami Herald before heading to Yahoo and then Bleacher Report. And this role makes it sound like Cole will also be working with FanSided’s various team and league sites on some level, as well as the homepage. The release mentions that Allen will still be involved as well, and that “Cole will work closely with Allen in the development of tentpole events such as The Fandom 250 and Fan of the Year, as well as working with the product team to develop and test new technologies that will enhance content as well as user experience.”

This move comes at a time when there appears to be some uncertainty around the future of FanSided and fellow Meredith  publication Sports Illustrated. Meredith made it clear even before purchasing Time Inc. that they were interested in selling off that company’s sports and news properties, and they put SI on the block earlier this year, but that sale wasn’t getting far as of September thanks to the reported steep asking price. And while a group involving Joshua Pollock, Cleveland Cavaliers owner Dan Gilbert and motivational speaker Tony Robbins was reportedly in “final talks” to buy SI later in September (and perhaps convert it to motivational speeches in Comic Sans), they may no longer be the frontrunners; Keith J. Kelly of The New York Post reported last week that former NBA star Ulysses “Junior” Bridgeman and Canadian sports executive Larry Tanenbaum might have beaten out Gilbert’s group.

A source tells AA that FanSided is expected to be included in any SI sale, but there’s still some uncertainty ahead on just what will happen with SI. Still, it seems pretty unlikely that Meredith’s really interested in owning sports publications for the long term. Maybe having a veteran journalist like Cole at the helm will make it easier to shop FanSided. At any rate, we’ll see what moves he makes and how his tenure goes.

This post has been updated with the info that FanSided is expected to be sold along with SI.