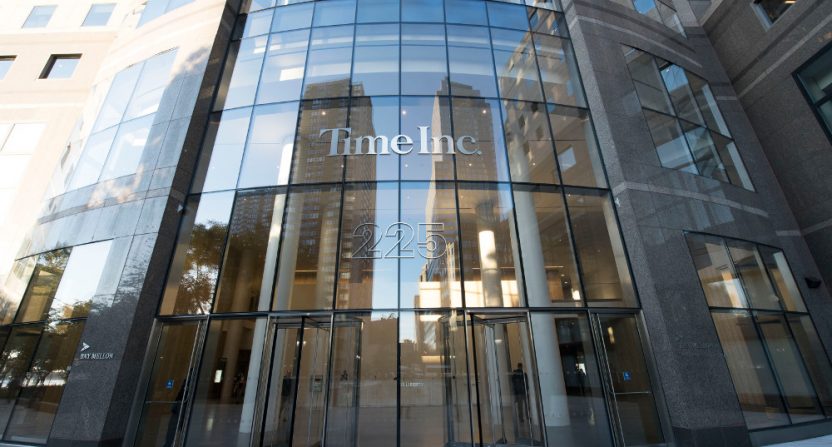 Throughout the whole history of magazine publishing company Meredith’s pursuit of Time Inc., which included being part of Time’s search for buyers in December, contributing an acquisition offer in March, coming close to a deal in April before talks fell apart over price, and eventually getting an agreement done this week with financing help from the Koch brothers, it’s been pretty clear that Sports Illustrated has not been seen as a vital part of the purchase.

Sports Illustrated, whose annual swimsuit issue makes headlines — and waves — around the world, was among several Time Inc. titles that could be sold in early 2018 once Meredith Corp. closes on its purchase of Time Inc., according to widespread speculation.

Meredith Chief Executive Steve ­Lacy on Monday was playing his cards close to his vest — not ruling out that some titles may be sold.

A review of each magazine’s ad sales and digital prowess are likely to sway Lacy’s decision.

…While Time Inc. had announced its intention to sell a handful of lesser-known assets — its Golf, Essence and Sunset magazines and its UK operation — Meredith will add Time, People, SI, Food & Wine, Fortune, InStyle and others when the deal closes in the first quarter of 2018.

“We’ll make some very informed decisions and move forward, but none of those decisions have been made today,” Lacy told a group of Wall Street analysts on Monday morning. “We’ll evaluate the whole portfolio going forward.”

Meredith’s publishing portfolio includes women-focused brands such as Better Homes and Gardens, Country Life, Midwest Living and Traditional Home, and they’ve said that the key Time Inc. brands they want are those that fit with that portfolio, including In Style, Real Simple, and People. SI doesn’t seem to fit there, and so there’s been speculation about it being sold off separately throughout the history of this pursuit. It’s also notable that Meredith made an offer for Time Warner’s non-news, non-sports properties back in 2013, but was turned down, with Time Warner opting to spin them off as Time Inc. instead. So the idea of them selling SI makes a lot of sense.

There also might be plenty of interested buyers. Yes, SI faces significant challenges, as we’ve seen with their layoffs and print issue cutbacks. But print’s still bringing in some money for them, and they’re an established brand with a strong digital presence, to say nothing of all their recent attempts to branch out, including an over-the-top TV channel, TV specials, selling swimsuits, selling swimsuit videos, VR documentaries and augmented reality print issues, and more.

Some other big publishers might be interested in them, including Tronc (owners of the Chicago Tribune, the Los Angeles Times and more), Gannett (owners of USA Today, The Arizona Republic, and many other newspapers), and Advance Publications (owners of Conde Nast, which includes GQ and The New Yorker, plus Sports Business Journal, a minority stake in The Sporting News, and print/online media groups like MLive.com, AL.com and NJ.com). Oh, and it’s worth remembering that the Time Inc. sale started with a takeover bid from Edgar Bronfman Jr., Len Blavatnik and Ynon Kreiz last December, and that SI was reportedly a big part of their plans. It’s conceivable part or all of that group might get involved again if it’s just SI on the table.

It’s far from clear at this point where SI will eventually wind up, but there may be more cuts coming to the title regardless. Yes, Time Inc. properties have already gone through several rounds of layoffs, but as Kelly wrote in another NY Post piece, Meredith looks likely to extend those further:

Rich Battista is expected to end his year-old stint as chief executive after the publisher of Time, People and Sports Illustrated completes its $2.8 billion sale to rival Meredith Corp. in the first quarter of 2018.

Battista will be just one casualty among many, insiders say, as Meredith — whose bread and butter is women- and family-focused titles like Better Homes & Gardens and Martha Stewart Living — is promising $400 million to $500 million in “cost synergies” over the first two years of the combination.

“To get anywhere near this [cost savings], a couple of thousand Time Inc. jobs surely have to go,” said one industry observer. “Just before the holidays, people have to be panicked.”

So more cuts could come without a SI sale, and if SI was sold separately to one of those other publishing companies, that would probably lead to significant cuts post-sale too. A big part of the pursuit of scale, which is becoming a larger and larger trend across media, is trying to reduce overlap and provide the same (or similar) products with less people. And it looks likely that may happen with SI, regardless of if the cuts come from Meredith or a new buyer. This will be a situation to watch, but it seems quite probable there are further challenges ahead for the company.