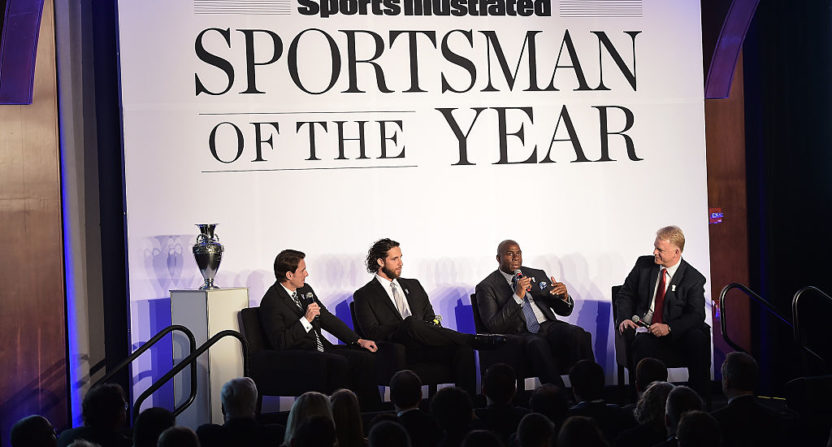 There’s been a lot of discussion about Sports Illustrated being for sale over the past few years, with talk about Time Inc. buyer Meredith unloading SI and other titles going back even before Meredith officially bought the company and then escalating post-sale before the company was officially put on the block earlier this year. But buyers weren’t quick to emerge, and there still hasn’t been much to suggest a deal is close. Sister publication Time was sold for $190 million to Salesforce’s Marc Benioff this week, though, and that’s raised further questions about what’s ahead for SI.

As Recode’s Peter Kafka writes, part of the problem may be that Meredith appears to be looking for more than many are willing to pay:

And while Time Inc. managers expected deals to get done months ago, the fact that they have yet to be announced is viewed as a sign that there’s a gap between what Meredith’s bankers are asking for and what sober buyers are willing to pay. Whoever does buy them will have to be comfortable with the fact that they’re buying businesses in decline.

Print ad revenue, not surprisingly, has fallen from $100.1 million in 2015 to $57.4 million last year. Digital ad revenue is growing, from $39.4 million to $49 million, but the digital ad business is getting harder, not easier. Ask anyone who isn’t Google or Facebook.

So, what’s a business with a fabled brand name and those kind of financials worth?

Earlier this summer, Meredith was telling would-be buyers they would need to pay at least $150 million to get their hands on Sports Illustrated. People I’ve talked to who have looked at the property think it’s worth much less than that. But maybe there are more Marc Benioffs out there …

Kafka’s piece notes that as per books circulated by the bankers at Houlihan Lokey who are handling the sale, SI’s annual revenue has declined from $239 million to $212.3 million to $184.8 million in the past three years. Their operating income saw growth last year, but only after a massive decline before that ($24.7 million in 2015 to $6.3 million in 2016 to $13.4 million last year), and some of that may be about cost-cutting moves (such as lowering issue frequency) whose long-term impacts are still up in the air.

And as a May New York Business Journal piece (from Sports Business Journal‘s Daniel Kaplan and Eric Fisher) noted, Meredith was asking for $100 to $150 million at that point, and even the lower end was a tough sell. Quoted media investment banker Reed Phillips opined that most magazines sell for between five and six times their cash flow, and that SI’s cash flow was estimated at about $20 million or lower at that point. So $150 million may be a tough ask, and that may explain why SI still hasn’t sold despite all this talk. (That piece also notes that a key source of their online traffic was Peter King, and he’s gone now.)

But there are some interesting and very wealthy buyers who have been linked to this, including Cleveland Cavaliers’ owner Dan Gilbert. And there’s plenty of speculation that Benioff may have paid more for Time than its numbers justified, so the story of the SI sale may not be over just yet. Maybe the price comes down, or maybe someone decides to meet what Meredith is asking. Maybe it’s worth overpaying for SI just so you can shift the whole magazine to Comic Sans…