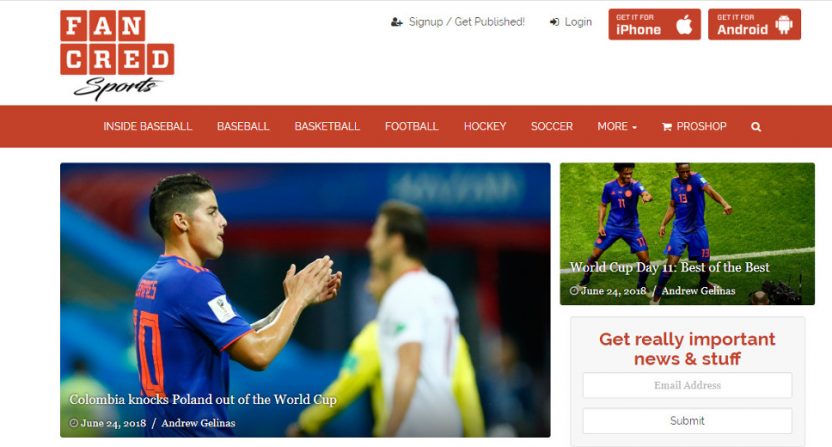 The last two years have seen a lot of changes for FanRag Sports, which made a big splash in June 2016 by adding Jon Heyman and continued with a lot of writers for a while, but then had several rounds of cuts in August 2017, October 2017 and March 2018. The October cuts in particular saw a shift in focus, with an emphasis on podcasts and video and a partnership with the LockedOn Network, and this April then saw a rebrand to FRS Sports Network and a syndication partnership with The Score.

There are now yet more changes ahead, as Awful Announcing has learned that Fancred is buying certain core assets from FRS (including the domains) and bringing Heyman on board, but the rest of FRS is shutting down. Here are the key quotes from their forthcoming release:

Fancred, the all-sports-all-the-time social and broadcast network, has agreed to acquire certain core assets of FRSSports, formerly Fanrag Sports, including the talents of Jon Heyman, one of the most respected and prominent baseball journalists in the game.

“This is an exciting addition for Fancred as we deliver a sports only social media experience and proprietary, mobile content to the next generation of sports fans. Heyman joins a growing base of influencer, On-Air personalities, and experts at Fancred,” said Andrew Miller, Fancred’s President.

“We’ve had an incredible run here at FanRag, building a solid, respected media company. But the timing and the offer made perfect business sense. We want to personally congratulate Fancred and wish them the best,” said FRS CEO Craig Amazeen.

“I’m excited to continue to bring the fans closer to the game with breaking news, clubhouse insights and unique stories from in and around the game which can all be found on the Fancred app. I hope and expect that we can continue to build on the wonderful relationship we built with the fans at Fanrag/FRS Sports.”

While Heyman may be moving over to the new company, though, many who were at FRS won’t be following. This is an agreement to only acquire a few parts of FRS, with the rest of the company shutting down. One source told Awful Announcing “almost everyone is gone.”  Another source said Jaime Eisner and Paige Dimakos are among the few moving to Fancred.

We’ll see how things go for Heyman and for Fancred in the wake of this move. It’s certainly interesting to see him picking up another show in addition to written work, while still working for MLB Network. And the emphasis on not just bringing him on board as part of an acquisition, but focusing on that in a release, illustrates his importance to this deal. But it’s certainly unfortunate to see more writing jobs lost in a sports media sphere that seems to be regularly contracting.

Update: Some FRS writers have announced their jobs are ending thanks to this deal.

Personal news: My contract isn’t being renewed by @FanRagSports. pic.twitter.com/dBf2UqOA8Z

Well I guess this is out there now. No idea what my next move is going to be, but if anyone has any ledes, my DMs are open.

Really fun five years. Couldn't have asked for a better group to spend it with. Exceptionally proud of what we were able to do.

Now, on to the next one. https://t.co/QBZ1EGuXty

We’ll add in more announcements as we see them.