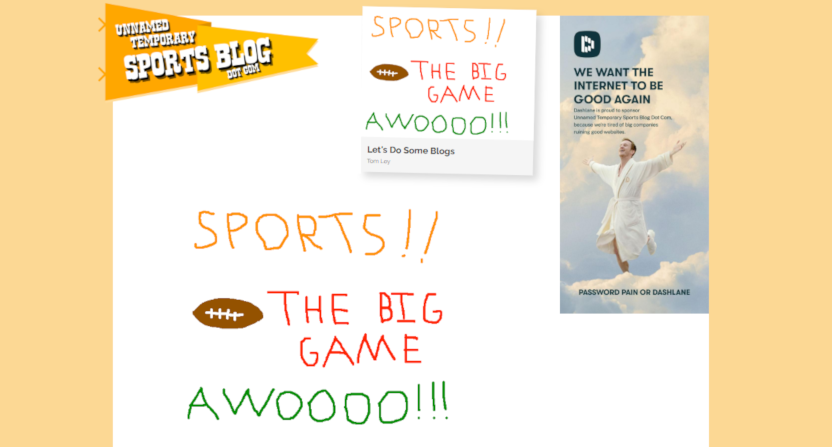 While Deadspin is dead, Jim, there’s now going to be a temporary relaunch of something that has a much better claim to the site’s legacy than G/O Media’s futile attempts to reanimate the corpse. Many former Deadspin writers and editors are teaming up for a temporary blog at UnnamedTemporarySportsBlog.com that will run posts Friday, Saturday and Sunday around Super Bowl LIV, sponsored by password security company Dashlane. That site featured an introductory mock Q+A with former Deadspin features editor Tom Ley Thursday, and Maxwell Tani of The Daily Beast wrote that it will include several former Deadspin writers and editors:

Deadspin may not be active for the Super Bowl this weekend, but some of the site’s more prominent ex-staffers are launching a temporary publication to blog about the big game.

Several of Deadspin’s most well-known writers—who quit the now-dormant outlet last fall over deep conflicts with its bosses at G/O Media and investment firm Great Hill Partners—will reunite this weekend to blog about the Super Bowl for a website underwritten by password-management tech company Dashlane.

…People involved with the project told The Daily Beast that, along with Ley, several of the site’s former writers and editors, including Barry Petchesky, David Roth, and Drew Magary will blog for the site.

What is the Unnamed Temporary Sports Blog?

It’s a blog! Temporarily! Over the course of the next three days, Jan. 31 through Feb. 2, we will be publishing blogs for your reading pleasure. At the conclusion of this three-day period, we will vanish.

Who will be posting blogs on this site?

All of your favorite sports bloggers. Well, maybe not all of them, but at least the ones who are currently unemployed due to their recent decision to detonate their own careers. We’re all feeling great and ready to blog.

What kind of blogs will you be posting?

We will be posting blogs about sports and whatever else pops into our minds. We’ve been made feral by unemployment, so it’s possible that things are going to get a little weird.

This seems like a logical move for everyone involved. There’s a lot of interest in the former Deadspin writers after the mass resignations at the end of October (following G/O Media’s firing of Petchesky for refusing demands to stick to sports), and the Super Bowl is generally a period of peak traffic for sports sites. Underwriting three days of blogging from prominent personalities at a peak traffic moment feels like pretty good advertising for Dashlane, especially with an ad of “We Want The Internet To Be Good Again: Dashlane is proud to sponsor Unnamed Temporary Sports Blog Dot Com, because we’re tired of big companies ruining good websites.” And while some of the Deadspin staffers have already found jobs elsewhere, bringing at least part of the band back together for the Super Bowl makes quite a bit of sense; this is a way for some former Deadspin staffers to get some writing out there on a platform that’s going to get a fair bit of attention, and to get paid for it.

The other notable part of this is how it will likely make G/O Media’s attempt to resurrect Deadspin look worse by comparison. That bit of necromancy hasn’t fully happened yet; claimed non-scab Jim Rich has been hired as editor-in-chief, but he doesn’t yet have a full staff of people willing to tarnish their reputations by working for zombie Deadspin, and the site still hasn’t been updated since the last unbylined post (Nov. 4, on Kellen Winslow Jr.). Mediaite’s Matthew Kassel confirmed then that it was G/O Media editorial director and long-time Deadspin foe Paul Maidment writing the unbylined posts, and Maidment resigned his position Nov. 5 to “pursue an entrepreneurial opportunity.” Since then, Deadspin.com hasn’t been updated.

With the new “Deadspin” (which will have nothing in common with the old one beyond the Deadspin.com URL) still not relaunched, the former staffers have a great chance to show off their take on how Deadspin would cover the Super Bowl (and everything else) if it still existed, and that will likely look a lot better than whatever zombie Deadspin winds up being. The writers are the true heirs and the true continuity, and any eventual corporate relaunch probably will look much worse than what actual Deadspin writers produce. We’ll see how this goes, but Untitled Temporary Sports Blog Dot Com will certainly be a site to keep an eye on this weekend.