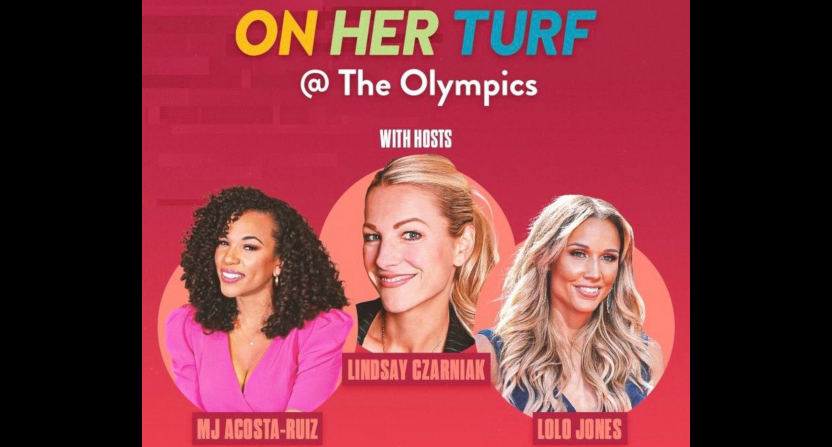 The Olympics is a rare sports event where women’s sports gets a lot of the attention, focus, and airtime, and it’s notable to see broadcasters specifically focusing in on the women’s sports side. One case of that is with On Her Turf, a women’s sports-focused property NBC launched in 2018 first as social media accounts, then later as a podcast and a show. At this year’s 2020 Tokyo Olympics, they’ve further expanded On Her Turf, turning it into a daily Peacock show focused on women’s sports, one hosted by Lindsay Czarniak, MJ Acosta-Ruiz, and Lolo Jones. Acosta-Ruiz and Czarniak spoke to AA earlier this week about the show, and both said they were thrilled to get the opportunity to spotlight women’s sports, with Acosta-Ruiz (known for her NFL Network work) saying she followed those accounts long before she got involved with it.

“I’ve been following On Her Turf on Twitter and Instagram and digitally for quite a while now. It’s just content that I was automatically drawn to because I have such passion not only for women in sports on the media side, but for female athletes and the female perspective. When the opportunity came to join On Her Turf at the Olympics, via Stamford, Connecticut, it was a no-brainer and I jumped all over it.”

This is just the latest sports venture for Czarniak, known for a long career at ESPN and recent work on Fox and CBS racing coverage, plus her The Artist and the Athlete podcast. She told AA she’s thrilled to get the chance to do something focused on women’s sports.

“This is a rare opportunity. To me, it really feels like a perfect storm, a chance to have fun in a way that you’re touching a lot of different things that you do, with the focus being on women, which I love. We get to do highlights, we get to do storytelling, and part of that is in the way of interviews, some that are shorter but also some that are long-form. As a journalist, that’s really fulfilling. And there aren’t that many times or roles you can find where you’re able to do that, which I think is awesome.”

Czarniak added that this comes at a particular time where it feels like there’s a chance to really show off female athletes’ accomplishments.

“The content being about women, there’s a moment right now. Obviously this has always been important, but right now especially, female athletes are using their voices in a big way and they are making a big impact. And to be a part of a show that focuses on that is awesome. It’s something that I’m excited about, but also something I’m proud of, but I think we all feel that way.”

Acosta-Ruiz said this show is interesting, as it’s a chance to show off these athletes at the peak of their success, but it also shows that they don’t always receive a lot of attention in between Olympics.

“I think an advantage is that the [U.S.] women who go to the Olympics always dominate. It’s not even a secret. They’re some of the most successful athletes and some of the most recognizable athletes across the board. I think one of the challenges, and we spoke about this recently on the show, is that for many of these athletes, the Olympics is sort of the only or often the pinnacle of their careers. So outside of every four years, or in this case, every five, the access to these athletes, to what they’re doing, to how they’re growing and training, is almost non-existent.”

“And I think that’s a big failure all around, because this doesn’t end for them once they leave the Olympic village or the Olympic stage. It carries on for them, it’s a lifestyle. So it’s a beautiful opportunity to showcase the talent and the athleticism that they have while also recognizing ‘Man, we should have this much emphasis on them all the time.'”

Czarniak said that focus on this particular moment for these competitors really adds stakes to the show.

“Sports is always so great for so many reasons, but you realize fast when you’re into it,  ‘This is their moment.’ So for a lot of them, you’re realizing when you’re talking to them, the gravity of the individual decisions that they’re a part of. It’s part of what makes it so great, but also in some ways, it can be heart-wrenching. You’re spotlighting somebody’s moment of their lifetime, and if that doesn’t end in a win or a medal, then it’s like ‘Oh, wow.’ You’re along for the ride with them, which I think can be a challenge, but also one of the best things. Because you just never know what to expect or who’s just going to push through and become a great story.”

Acosta-Ruiz said one of her favorite interviews so far was with gymnast MyKayla Skinner, who wound up picked for this team in a non-nominative spot (meaning she didn’t get to compete with the U.S. team in the team competitions).

“MyKayla Skinner was just so incredibly honest with us in terms of how she’s taking this moment of ‘Man, I just really wanted to qualify and I didn’t get to do that,’ but in the same breath, ‘I’ve accomplished the goal that I’m an Olympian and nobody’s going to take that away from me. …I almost resonated with her; she took such a different path in her Olympics and gymnastics journey, and it reminded me a bit of myself and parallels in my broadcast career.”

“I felt that really deeply when she said ‘I gave it a shot, I owed it to myself, and nobody’s going to take that away from me.’ I’ve sort of been sitting with that all day; these athletes are like us, except they’re really, really good at what they do and their physical gifts. But at the end of the day, they’re leaving their passion out on the floor for literally the entire world to watch.”

Czarniak said one of her favorite interviews came with volleyball star Kerri Walsh Jennings, who didn’t qualify for these Games.

“When we had Kerri Walsh Jennings come in, she was in a roundtable with us with gymnast Laurie Hernandez (who’s covering the Games for NBC), and I was just struck by Kerri’s openness, because I had just figured that she had talked about this a lot. We asked her out of the gate just what this experience was like for her, and obviously she if she had her druthers would be competing in these Olympics. And she was very honest, and said ‘I haven’t really put words to this, and I may cry.’ To hear them both talking about what it was like from their perspective and not being able to be there, I just thought it was just really real.”

“It’s like a relatability factor. For me, I’m similar, and I can’t help while hearing their stories to think about things, albeit I’m not at an Olympic stage, in your life. It’s like ‘Oh, wow, I can relate.’ So that was definitely a highlight for me.”

“Her story of how she got into it, that still has blown me away. Because she talked about how she didn’t play rugby until she was introduced to the sport, at Maryland, while going to college. And now, 10 years later, here she is in the Olympics. So that, to me, is phenomenal; anyone can think about being in her shoes, one day you’re not even thinking about something, and the next day you’re beginning a journey that leads you to this stage.”

“And she’s someone who also pointed to the difference that she can make impacting women moving forward, and she said that’s something that hadn’t been on her radar before. And I felt that’s really meaningful and powerful, and that’s sort of how I feel being part of this show. You realize something is a job or a gig or a great opportunity, and this is actually an opportunity to have all these voices who feel very strongly about the mission to reach out and connect with younger girls.”

Acosta-Ruiz said a notable element of On Her Turf is that they’re not just shooting for a women-only audience.

“This is a focus on women’s sport, but it’s certainly not a show just for women. My husband said it best, he texted me after our first show and said ‘Man, I don’t think I’ve enjoyed a show that much in a really long time.’ And of course, he may be a little biased, because he’s my husband. But the point is that I think it will resonate with folks across the board. And I’m really excited to bring these women the attention that they really warrant and that they’ve worked so hard for and that they deserve. And I hope it continues long after the Olympics.”

And Czarniak said doing this show has been a terrific experience, and a showcase of what can happen at the Olympics.

“This is such a cool opportunity, and it’s so great to be able to work with MJ, too; it’s been a while since I’ve been able to collaborate with someone like this, and it’s so much fun. We met three days ago, and it’s great. It’s really fun; what an honor. And it’s really cool also to bring an element of the unexpected into this; you don’t really know what you’re going to have for your show until you’re going in in the morning. But here it’s like ‘Okay, here we go,’ and it might be the star we expected or someone we’ve never heard of. It’s really cool, and it just speaks to the power of these Games.”

On Her Turf airs on Peacock Mondays through Saturdays at 7 p.m. Eastern and Sunday at 6 p.m. Eastern. They also have an associated podcast, available here.