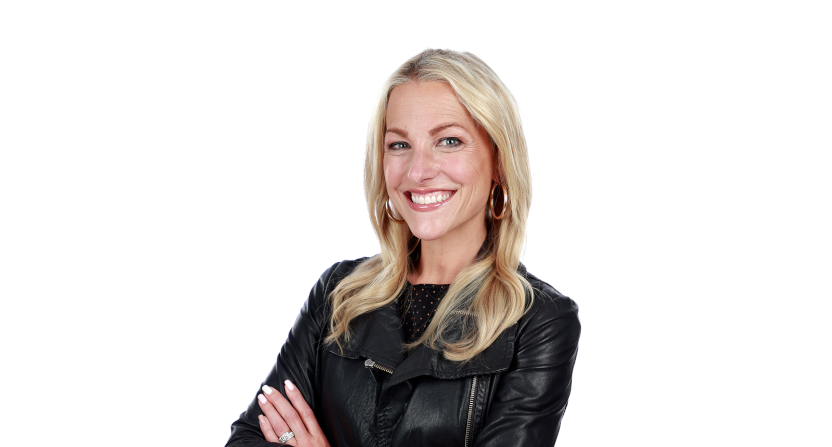 The Camping World Superstar Racing Experience Series (SRX) kicks off Saturday night with the first of six short-track, primetime races. This week’s edition takes place at Stafford Motor Speedway in Connecticut, and it will air on the CBS broadcast network and stream on Paramount+ beginning at 8 p.m. Eastern. Lindsay Czarniak, known for her past work for ESPN and current NASCAR work for Fox Sports (plus her The Artist and the Athlete podcast) will be hosting those broadcasts alongside quite a lineup of prominent racing personalities, and she spoke to AA this week about what she finds exciting with this new series. To start with, Czarniak said the broadcast team CBS has assembled for this was a big part of what drew her in.

“I got involved because (famed racing producer) Pam Miller and the folks at CBS reached out to me about it because of my history in racing. They reached out and said ‘We’d love for you to do this.’ I initially was pumped about what the opportunity was even before I got in the weeds and heard exactly what it entailed, I was just intrigued out of the gate.”

“Honestly for me it was the names that were involved, and that goes for the drivers that I knew that they said were competing, but also the people that they were mentioning as analysts, potential guests. Every person that is a part of this broadcast team I have worked with at some point in my career, except for the producer [Miller], but I’ve heard so much about her and our paths have absolutely crossed.”

Czarniak said the chance to work as a broadcast host for this also appealed to her.

“It also for me was about the live event coverage. I love that. And I love racing, and I love just being at the racetracks. So it was a perfect storm of the people, the event, and also the role. I love being able to host, and the way they described it with all of us being engaged and having conversations during this race, it sounded great from the start.”

She said hosting is particularly interesting, given the adrenaline involved in putting on a live broadcast.

“It’s a lot of different things and allows you to flex different muscles, and that’s what I love. I love the ability to interact with my colleagues the way that we’re going to be able to do. It’s bringing an event to life and bringing it on air. And when you’re hosting, it’s not that different from reporting, but when you’re in a live setting, there are so many things that can go wrong that it’s really an adrenaline rush.”

“It’s also just, if you love what you’re doing when you’re hosting, similar to reporting, that can drive you and really fuel you. And for me, that’s what makes this super exciting. You’re here talking about this amazing event; I envision this similar to how it felt when I was hosting coverage for the Indy 500 or NFL games. You’ve got the adrenaline because the event’s about to happen, and it’s also like you’re bringing this thing to life.”

A notable element with the SRX series is that it’s going for not just an audience of existing race fans, but also people who don’t traditionally watch any kind of auto racing. Czarniak said that’s a worthwhile effort, and she thinks this series may be able to get some of that crossover audience.

“There’s also the challenge of getting people in mainstream America to fall in love with racing and fall in love with this kind of racing. It’s really satisfying, and cool. And I think that this series has the right recipe of the people, the locations that we’re going, and the format that they’ve come up with. It’s really cool that we can explain to people and let them see for themselves why we love it so much.”

“When you’re talking about the men and women that are racing, they are legends in different aspects of racing. So the fact that we have the guy that just won his fourth Indy 500, that’s just off-the-charts awesome that Hélio Castroneves is even a part of this. It’s the people that make it up and the fact that they’re all going to be driving the same racecar, there is nothing different. It’s a level playing field. And they’re from not only IndyCar, but NASCAR and different parts of racing.”

“So to me, there are levels in it; it’s who can adjust on the fly. The competition is really cool out of the gate because of the people in it, the multi-time champions. Also, they know what it takes to be the best. So that element plus the element of rivalry that we know exists between certain competitors that are going to be in our series makes it really exciting, intriguing. And there is no limit on the trash talk ability, we know that. We know these guys are doing this in prime time and they want to win. There are bragging rights, and there are high stakes.”

There’s always discussion of how to make a broadcast work both for those new to a sport and those who already watch it regularly, and that’s particularly true with a series like this hoping to land some crossover appeal. Czarniak said there have been a lot of behind-the-scenes discussions on how to pull that off.

“We’re really learning as we go. It’s a lot of us talking it out while we’re on our phone calls in the prep that’s led up to this. For me, I can tell you what I find really exciting about it; I can’t wait to get to a dirt track. I just love being in the thick of it. That’s going to be awesome. But there are also certain things I’m thinking about; not to oversimplify it, but I’m thinking about ‘What would a viewer care about if they’re sitting at home, what would my mom care about watching?’ There’s a lot of that kind of mentality. So those are things that we’re bouncing off each other together.”

And she said the broadcast team for this is great for that purpose, as they have the knowledge to go deep on things when needed, but also have experience at targeting a broader audience.

“We have people that are the best at what they do in the thick of it. We have people that can go in the weeds as much as you want to get in the weeds, but we know that we can’t really do that to that extent. So it’s definitely a meaty challenge. But it also is sort of checking each other and having really open conversations of ‘Okay, what do people want to know?'”

“We’ve had calls where we’re like ‘Okay, we have these superstars, but we have to remember, not everyone knows who just won the Indy 500, not everyone knows Bobby Labonte in his heyday, not everyone watching is going to be aware that Tony Stewart is one of the biggest hotheads, that him going up against Paul Tracy might break into a fight in the racetrack.’ They won’t all know that, so it’s up to us to temper that. And I think the elements we’ve created and the conversations we plan to have will hopefully satisfy that.”

Czarniak said she thinks the unique format of the SRX series, which includes two 15-minute heat races for positioning and then a 100-lap race, also may help with the crossover appeal.

“I don’t want to get too in the weeds with this, because that’s what we’re trying not to do; it’s really challenging to try and keep it so broad that people who are not versed in racing will like this. But I think just the fact that there are going to be rules that are changed a bit on the fly, things that are thrown out, it’s almost racing but also an entertainment, obstacle-course type show.”

“And the creators of this, Ray Evernham and Tony Stewart, the format that they’ve come up with the three heats, I think that’s really cool. It’s something that gives the competitors a new kind of challenge and a reason to figure out how to race a bit differently than they have in the past.”

Czarniak said while they’re focused on delivering the best broadcast they can immediately, she also thinks there will be room to adapt based on viewer feedback.

“We’ve all acknowledged that this is something we want to be very strong out of the gate. It is a process, and we are building, and that’s one of the luxuries, because this has never happened. This series is brand new and the format is brand new. And we’ll have to react to a lot of what we’re hearing from people watching this, what do they like, what are they saying?”

“One piece of that is the storytelling aspect, and I really love storytelling when we can make it relatable. And we’ve all agreed that this is going to thrive on those types of relatable stories. A lot of it will be behind-the-scenes; a driver that you’ve heard of, but what are they like at home? What’s his family life, what’s she doing now? There’s a lot of that.”

“It’s also having a lot of conversations about what we think, and paying attention to what CBS has done in the past.  But this is a different boat. It’s primetime, and it’s new people that are watching. You’ve got to think about that way.”

She said that it’s thrilling to be involved with a new racing property like this right from the start.

“To me, truly, this is an opportunity to do something with the sport that I love and with a group of people that are super passionate about it. We’ve said from the start that this is about having a conversation and weaving it through. And we’re super pumped to get it started.”

The first SRX Series race can be seen Saturday at 8 p.m. Eastern on CBS and Paramount+. A full schedule for all six races can be found here.