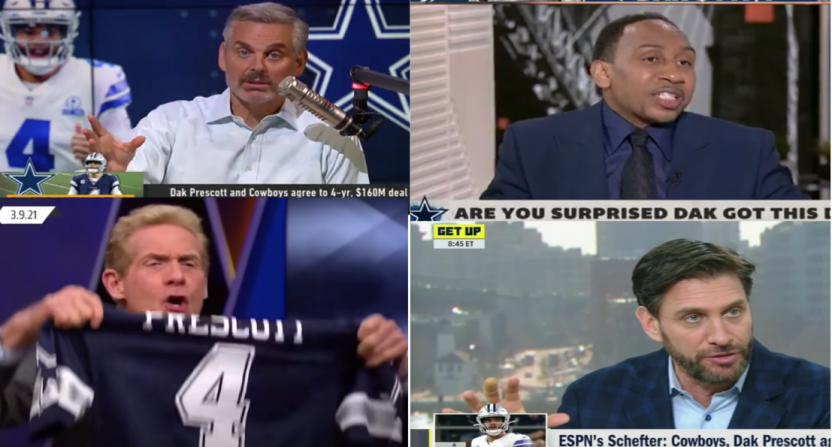 As you are probably aware by now, Dak Prescott’s two year game of chicken with Jerry Jones and the Cowboys has come to an end with the Cowboys signing Prescott to a four-year, $160 million extension. This historic extension puts to bed one of the most leaned on, and perhaps overused, topics for the usual suspects in sports media (national weekday multi hour non sport specific personality driven national shows).

For viewers more familiar with these shows, I noticed a sense of loss (as well good riddance) that the Prescott extension saga would no longer be a mainstay in the rotation of frequent topics.

Finally @ColinCowherd can talk about something other than Dak https://t.co/jolEyPSIyu

Dak Prescott's contract situation has been a mainstay for the national sports gas-bagging industry for about two years,

Other than LeBron, I don't think another topic has filled more hours of TV and radio chatter.
So what now, Greeny, Skip, et al??

With this chapter of Embrace Debate closing, I thought I would subject myself to hours of pain to try to find out who would go out on top as the program that discussed Prescott’s extension the most. I have no idea why I did this to myself.

Which show do you think devoted the highest percentage of their show today discussing Dak Prescott's new contract?

We picked the four most obvious shows: ESPN’s Get Up! and First Take and FS1’s Undisputed and The Herd. All four programs fill multiple hours each weekday and air on the two channels most known for squeezing and stretching en vogue topics, debates, and news developments far beyond what one could think was possible.

We took the liberty of assuming each show averaged seven minutes of commercials every half hour. We then fast forwarded through all four shows, noting their formats and time spent talking about Dak. In topics in which Dak was somewhat related (like ranking top NFL QBs or how the extension will effect the Cowboys defense), we made a judgment call and assigned a portion of those minutes to the time spent on Dak. We rounded each segment either up or down to nearest minute. The results are below.

Analysis of coverage: I actually think Get Up’s coverage was the best, in that I didn’t find it painful to consume. That’s largely because they involved a ton of different people so it felt fresh and less contrived.

Get Up! started with Adam Schefter talking to Mike Greenberg. Keyshawn Johnson and Stephen A Smith would appear in studio (separately) to talk about Prescott’s extension. Booger McFarland, Dan Orlovsky, David Pollack, Domonique Foxworth, Mike Tannenbaum, and Dan Graziano were all brought in remotely. So nine people in total came on to discuss the news across seven different segments, and it’s very possible I missed someone. The only notable thing that happened I’d say was this.

That one's for you, Cowboys fans ?? pic.twitter.com/Ov4e6NHRHg 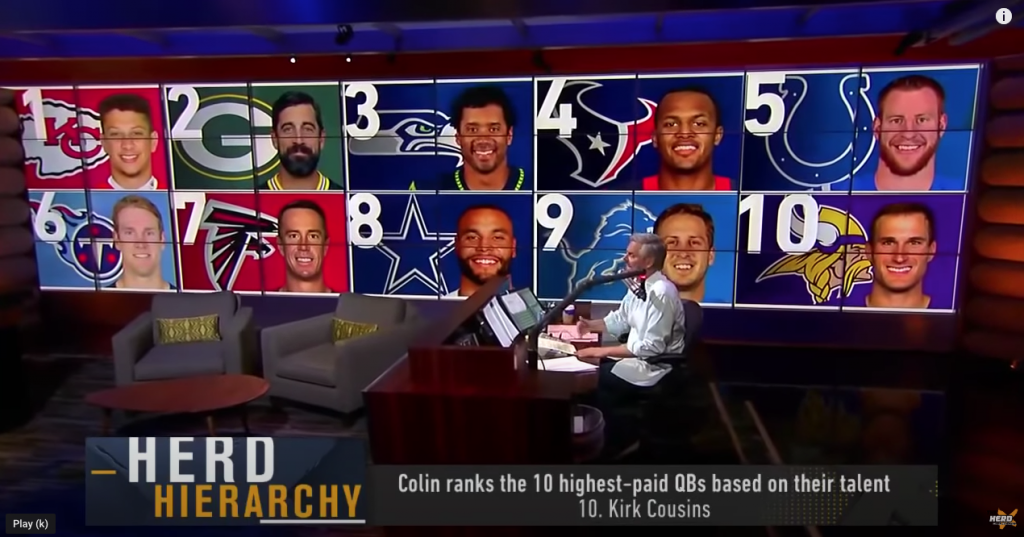 Airing over three hours with commercials, The Herd nearly beat out fellow FS1 show Undisputed in terms of most minutes spent on Dak. I was amazed, because Cowherd did most of the heavy lifting himself here. Over the course of the three hours, there was 12 Dak segments. Cowherd did bring on Daryl Johnson and Jimmy Johnson, though they were pretty short appearances. You can tell both The Herd and Undisputed suffer a bit from not being able utilize the wide swath of NFL personalities ESPN does. I imagine that’s why Cowherd, Bayless, and Shannon Sharpe are paid so well, simply because the shows don’t need as many floating contributors. My main takeaway is that Colin Cowherd is just a prodigal talent at talking. He could do a five hour show. I’m not even sure he’s even aware what he’s saying, but it just pours out of him for better or for worse.

The only real highlight from watching came right towards the end, when Cowherd did a read for beloved right wing coffee brand Black Rifle Coffee before apologizing that the show was three hours of Dak. I respect the self awareness of both your audience and your content. 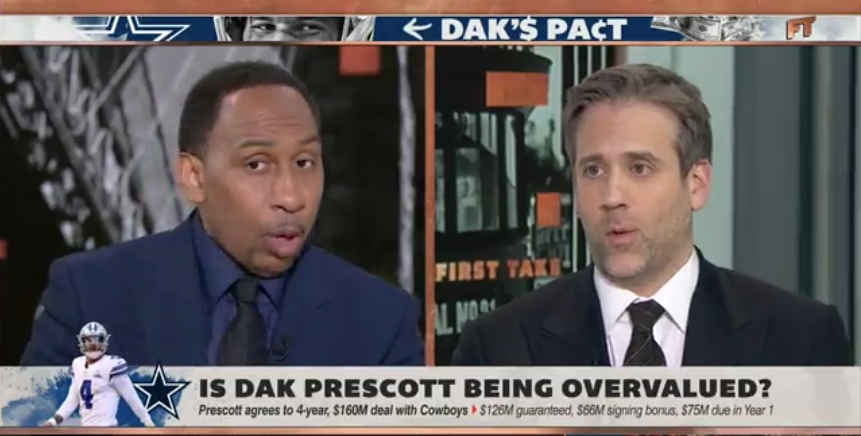 I have no idea if this is a normal thing, but First Take went commercial free for the final 30 minutes of the show. That whole back 30 was devoted to Dak. The show opened with 21 minutes about Dak talk. There was another 13 minute segment. Booger was on for some of this, but it was really just Max Kellerman and Stephen A doing their thing on a show that was nearly 70% about Dak. It was a lot of going around in circles, and it was definitely the only show that required a volume adjustment. 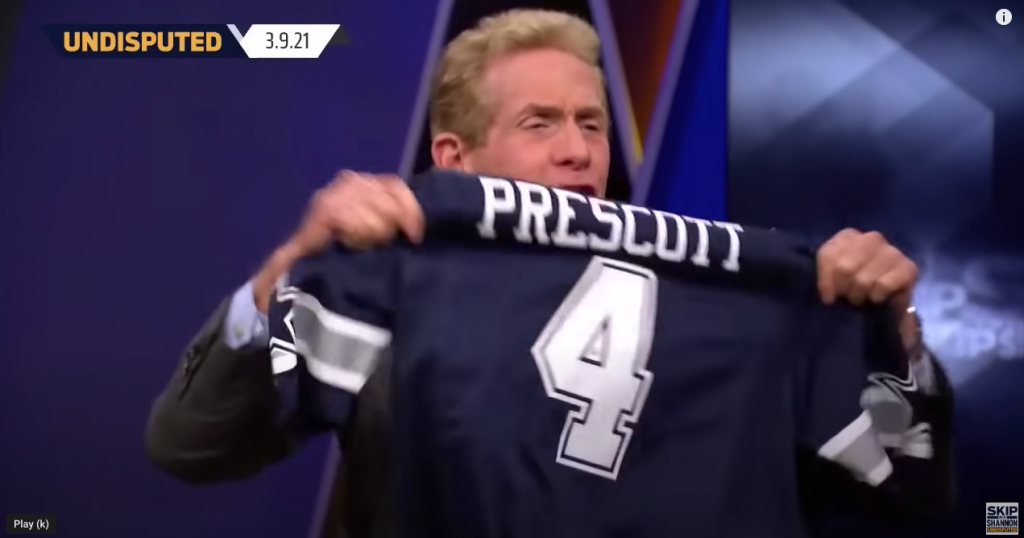 Skip Bayless lead off the show with a cringeworthy “four more years” chant while waving a Prescott jersey. This was a bit odd, since it came only a few months removed from him blasting Prescott for opening up about mental health issues early on in the pandemic, which he refused to apologize for and was subsequently rewarded with a $32 million contract.

There was no other topic for for the first two hours of the show. Orlando Scandrick, Jane Slater, and Greg Jennings were brought on at different points to talk about Dak, but largely it was Skip Bayless talking and talking and talking with Shannon Sharpe getting in a few thoughts in every once in awhile. Bayless really reveled through the entire episode. I hope one day I’m this happy.

The only two other topics that made it onto the show were Jalen Hurts and Chris Godwin, and those were in the last half hour and lasted only a few minutes. The entire show was NFL specific, which seems kind of crazy in March, but what the hell do I know.

So there you have it. If you thought First Take, The Herd, or Get Up! ever went too far in terms of latching onto a topic, it seems Undisputed cannot be rivaled here, besting their nearest foe by nearly 25%. We’ll have to see what replaces Dak contract watch as the next thing they jam down our throats.