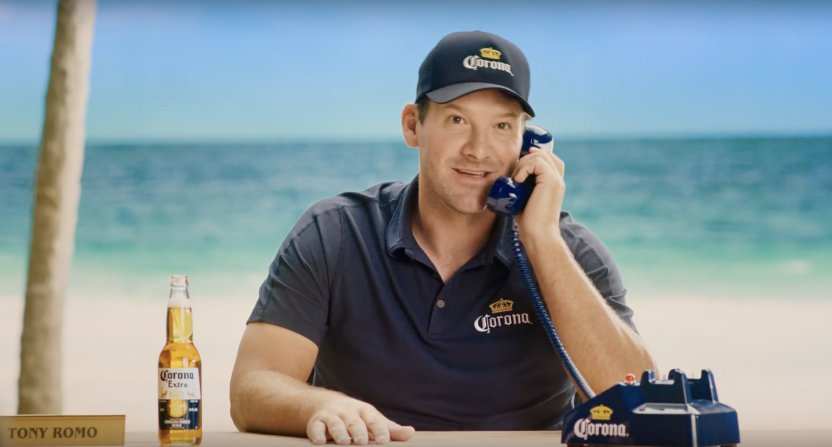 The biggest discussion around new CBS lead NFL analyst Tony Romo’s first year was about him predicting plays, something rarely seen from game analysts and something he hit on at an impressive rate. That led to a lot of praise from viewers, some criticism from unlikely sources (including Brent Musburger), and even some imitators, some who found lesser (Alex Rodriguez) and similar (Gary Danielson, Tom Crean) degrees of success. Now, though, Romo was named the new Corona Hotline operator this week (taking over from Jon Gruden, now the head coach of the Oakland Raiders), and he did some media appearances around that, including an interview with Charles Curtis of For The Win. And he told Curtis the play predictions weren’t initially something producers wanted him to make:

“That was something I wasn’t supposed to do. …It wasn’t like I was predicting plays. You’re just kind of talking. It didn’t feel like, ‘I’m going to predict the play here.’ It felt like you were talking about the game that you were seeing and you’re trying to let the viewer know something that could be neat to look out for. Sometimes you’re just talking to Jim (Nantz) and stuff comes out. I think the goal is to not feel rehearsed ever. It’s a natural communication.”

“The thing is people don’t want … if you’re wrong you get hit hard and people can really say things that are negative. I’ve never really worried about too much about what people say or what could happen if…It’s like a golf shot: What happens if I shank this ball out of bounds? Well, you’re not trying to! You’re trying to make birdie. Let’s go, let’s attack. If you’re ever going to be good at anything, you’ve got to attack and let it go. And you might fail and you might fail again. But one day you’ll hit that shot. You’ll get better. I just feel like you just let it go.”

Those are notable comments from Romo, especially with his play prediction dominating the conversation about him as an analyst. And his approach there may have taken some criticism, but it’s also received a lot of praise from viewers. And that may lead to others adopting it. Fellow CBS game analyst Bruce Arians told AA’s Shlomo Sprung this week he might do some of the same; here’s that exchange.

I’m sure you still know a lot of teams’ tendencies, playcalling. Tony Romo was all over the news for calling plays in advance last season. Do you think you could do that?

Yeah. Knowing some coordinators, [I could tell] “he’s blitzing here.” You just got the first first down past the 50, he’s blitzing. That’s just his history. And so yeah, the same thing with some offensive guys, when you think they’re gonna take a shot. And then there are some that never take shots, it’s just nickel-and-dime, nickel-and-dime [down the field] with passes. And I always criticize those guys [laughs].

[Arians said he’s just gonna be himself when it comes to calling those plays in advance.]

It’s interesting to hear that something that’s really come to define the conversation about Romo as a broadcaster wasn’t particularly intentional, or at the behest of CBS. But it’s certainly worked out pretty well for him and the network, and he’s received a whole lot of praise for what he’s done so far. We’ll see where he takes his broadcasting approach next.