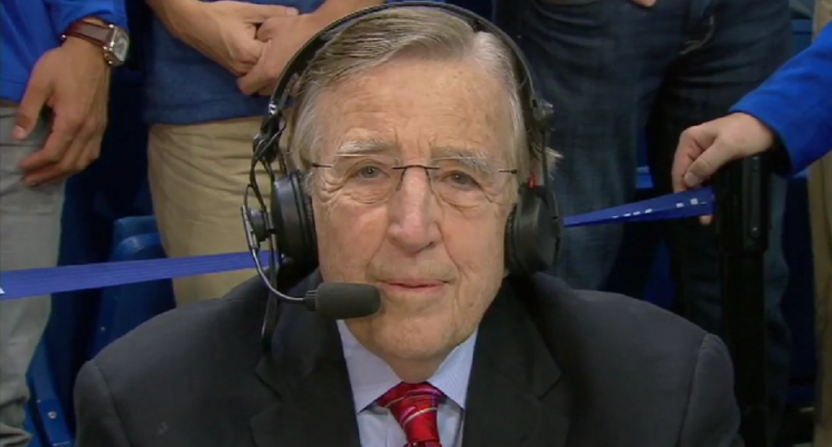 While hosting his My Guys in the Desert radio show on SiriusXM’s Vegas Sports and Information channel, broadcast legend Brent Musburger weighed in on Tony Romo’s early work as CBS’s lead NFL analyst.

Romo’s calling card, so far, has been his ability and willingness to predict the forthcoming play pre-snap.

Brent Musburger, though, is very much not impressed by that particular skill, nor the frequency with which Romo deploys it:

.@brentmusburger finally got a chance to watch a game with Tony Romo in the broadcast booth. What did you think, Brent? (Hint: Not a fan.) pic.twitter.com/N4UlWjLxbB

“Tony, get off it, okay? First of all, you’re intruding on your play-by-play man Jim Nantz, who’s just trying to give us the scene…we like to watch the game, okay? And you’re not gonna be…here’s a memo, to all the people who are like ‘Oh, this is great!’…uh-uh. It’s not going to happen. And the further…the more years you spend away from the league, you’re going to know less and less about the personnel that’s out on the field. So I’m blowing a ‘stop the hype’, okay, right now.”

That’s a pretty strong condemnation from Musburger, who’s certainly earned the right to analyze and critique a football broadcast. And his points aren’t without merit; Romo’s act could certainly wear thin, and as we’ve seen, analysts do tend to be at their best when they’re freshly out of the sport. That’s generally wielded in the positive sense, to praise new hires, but it stands to reason that the inverse is also true.

However, having watched a fair bit of Romo’s Week 2 call, it didn’t seem to be pervasive, or all that intrusive. It wasn’t every play, and it’s hard to imagine that Romo is harder on Nantz as a partner than Phil Simms was; Nantz practically needed a block and tackle to lift Simms’s dead weight through every broadcast. In fact, Nantz sounds as giddy as and loose as he’s ever sounded on the air.

It’s also a bit unfair to reduce Romo’s analysis to just these predictions; at one point during the Patriots-Saints game, during a replay Romo broke down a Tom Brady pre-snap read, utilizing the kind of insight that you really do only get from recently employed players. It was similar to Peyton Manning’s stop in the Sunday Night Football booth last season:

Peyton: "They have a tackle in at tight end, so the safety knows he's not going out on a pattern and can rush immediately."

So, in the end, there’s merit on both sides. Musburger is right in that anything that overpowers the game is generally not a good idea, and it could become shtick very easily. On the other hand, it’s clearly a unique twist, and anything that gets Romo to feel comfortable and offer more insight in ways the viewer can understand is a good thing. It’s all about finding the right balance.

Let’s not lose sight of Romo’s most important asset, though: he’s not Phil Simms.