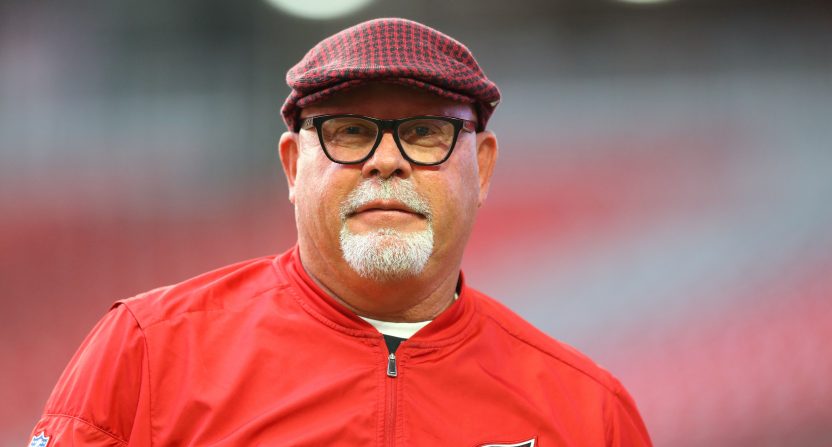 After a coaching career that spanned over 40 years, five as an NFL head coach with the Arizona Cardinals while also winning two Super Bowl titles as a Pittsburgh Steelers assistant, Bruce Arians retired to join the NFL On CBS’ number three broadcast team alongside Greg Gumbel, Trent Green, and Melanie Collins.

Arians, 65, has always been known for his colorful insights and fashionable attire, and didn’t disappoint Tuesday at CBS’ annual media day. Just four days after calling his first live game, a preseason contest between the Detroit Lions and Tampa Bay Buccaneers, Arians chatted with Awful Announcing about a litany of subjects, including calling plays in advance, why he stepped away from the game, and how he would handle the new helmet rule as a coach, among others.

Arians’ regular season debut will be on Sept. 9, when the Steelers visit the Cleveland Browns.

The following has been edited for length and clarity.

Why go into broadcasting right away? Why not take a year off like other coaches, relax? Why dive right into this?

The opportunity knocked, you know? I knew I wanted to do something, and broadcasting was always in the back of my mind. If and when I retired, I’d wanna try it. And CBS was nice enough to pay me for it.

How long did that process take? Was it right after you retired?

No, it took a few months. I talked with all the networks and CBS is just special and it was a good fit for me. I got blessed to be on a great team with Greg and Trent, who just had to break me in.

Is it tough being in the booth with two other people trying to not necessarily compete for air time, but you have to pick your spots…

We did the game Friday night in Tampa and it’s kinda easy because Trent and I just have conversations, you know? And oh yeah Greg, do you wanna call the next play? We picked it up so easily, and we did some practice stuff and Trent makes it so easy. He’s really bright, and Greg’s a pro of all pros.

Are you okay with how things ended in Arizona?

Oh yeah. I feel, what’s that word, closure? That was easy. I got my 50th win on the last play against Seattle. That was kinda the perfect going out party.

What do you think you bring to the broadcast booth?

Somebody who’s just been in the locker room. With all the issues that we have in the NFL, I’ve just been through that for the last five years. I think it’s a “fresh person” aspect, that’s probably the biggest thing.

You were just in those coaching meetings for broadcasters last week for the first time with Detroit and Tampa Bay. Was that weird for you?

[Laughs] It was a little bit, because Dirk Koetter [Tampa Bay’s head coach] is a good buddy, and he always plays in my golf tournament. And to ask him some questions that they’ll be tougher as we go. It’s gonna be interesting with Mike Tomlin, Hue Jackson. Mike I worked with obviously, and Hue I’ve known forever. Yeah, those are fun times.

I’m sure you still know a lot of teams’ tendencies, playcalling. Tony Romo was all over the news for calling plays in advance last season. Do you think you could do that?

Yeah. Knowing some coordinators, [I could tell] “he’s blitzing here.” You just got the first first down past the 50, he’s blitzing. That’s just his history. And so yeah, the same thing with some offensive guys, when you think they’re gonna take a shot. And then there are some that never take shots, it’s just nickel-and-dime, nickel-and-dime [down the field] with passes. And I always criticize those guys [laughs].

[Arians said he’s just gonna be himself when it comes to calling those plays in advance.]

What do you think you need to work on the most as an analyst? It’s obviously early for you.

I think the biggest thing is my voice. It’s hard to make myself louder, but that and knowing and ins and outs of when to jump in, when to get out. Somebody’s talking in your head and you don’t say “okay” [to the producer] [laughs] on the air.

Is it hard to determine what your voice level is when you’re in there?

Yeah. I sounded excited to me, and somebody will say “hey, you need more energy.” And I said I’m fired up, what are you talking about? Because I have that Southern drawl. I’m really from the North [he was born in New Jersey] but I’m Southern fried Yankee. So I said “okay, can you turn my mic up? Yeah, we’ll turn your mic up.” That helps.

So with this new helmet rule, there’s obviously a lot of gray area. Have you discussed that with the coaches, and meeting with your crew?

I was on the Competition Committee last year, and some of those conversations were already starting. I just don’t want it to slow the game down. I’m all for player safety, and there’s no place for the crown of the helmet in the game. You should never be leading with your eyes down, anyway. You’ve gotta play with your eyes up in this game.

So I think it’s a great rule, just don’t over-officiate it. I’ve seen two running backs drop their heads, and the defender had to drop his, and it got called [a penalty] on them. That ain’t what it’s for.

If you were still coaching, how would you instruct your team on the rule?

We would go through drill after drill, just like when the defenseless player [rule] came in, and you could only hit him from the numbers to the knees. We had a bunch of drills where we put a jersey on a dummy, and threw balls at the dummy and guys would go and hit it clean. So you just have to adapt for the rule. There’s no place in the game for the head as a weapon.

If there’s a head coaching opening that you find appealing in the future, is that something you would pursue?

Last question: Where do you get the hats from?

Is that the only company you use?

Yeah. As a head coach, the hats I used to wear on the sideline sometimes, had our foundation logo, Arians Family Foundation and the Cardinals logo. Every hat sold, all the proceeds go to the foundation. So we’re trying to get CBS on this one, and put it on our website and start having them made so we can help more kids. The foundation is for CASA, the Court Appointed Special Advocates. So we have the t-shirts and we have the hats, and so we’re trying to do good things there.