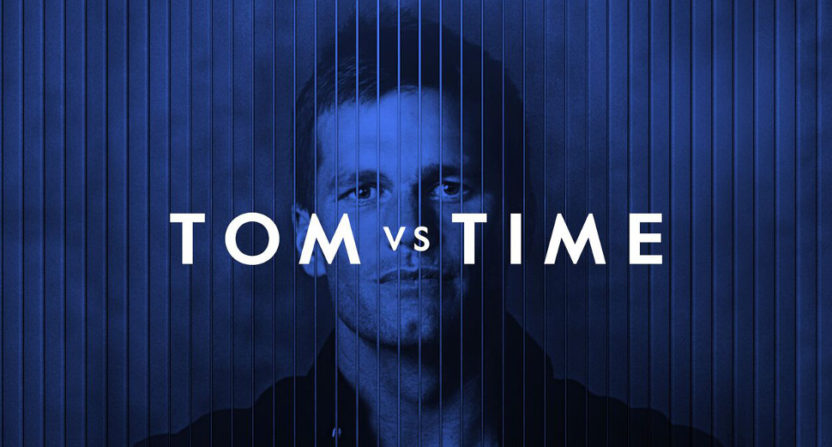 New England Patriots’ quarterback Tom Brady has often been reluctant to talk about his life away from the field, but he’s changing that tack in a new Facebook Watch documentary series set to premiere later this month.

The six-part series comes from director Gotham Chopra, and Brady is a producer on Chopra’s Religion Of Sports series on Audience, so it makes sense that they’ve partnered again here. The series, titled Tom vs Time, is even dubbed as “a new Religion of Sports docu-series” in a release, and the trailer has it credited as “In association with Religion of Sports.”

Here’s the trailer for Tom vs Time:

It’s interesting to see Brady pull aside the curtain that normally keeps people away from his personal life, and it sounds like he’s done so in a major way. The trailer shows clips of family life and working out, but also some musings from Brady on aging, playing football, and “Why should I stop?”

That’s a notable comment, especially with the discussion around the recent ESPN piece suggesting growing tensions between Brady and Patriots head coach Bill Belichick, with Brady allegedly trying to stay on longer, Belichick trying to have him retire to make way for Jimmy Garappolo, and Brady trying to force the Patriots to trade Garappolo.

And Mark Leibovich of The New York Times writes that there are plenty of other memorable moments in the series, including footage of Brady’s season binders that sees him keeping and discussing the letter he received informing him of his Deflategate suspension, Brady on trips with teammates Julian Edelman and Danny Amendola, and Brady looking through game film and brainstorming ideas for upcoming games with Patriots’ offensive coordinator Josh McDaniels.

That’s significant, given how close the Patriots have typically kept anything even vaguely related to games. Leibovich opines that this may not sit well with Belichick, and adds that the Patriots wouldn’t answer how aware of this documentary Belichick was:

One venue where Brady is barely seen: Gillette Stadium, or pretty much anywhere in the Patriots’ facilities. For a player who has been the epitome of the Patriots team-first philosophy, Brady would seem an unlikely candidate to open such a close-up lens upon his off-field self, especially during the season — and especially for a project set to drop during the playoffs. A player not placing undo attention upon himself would constitute a first principle of Coach Bill Belichick’s colorless “Do Your Job” collectivism. That is one of the many remarkable aspects of “Tom vs. Time.”

It is unclear if Brady has even told his coach about the project. The Patriots spokesman Stacey James said the team was nominally aware that a Brady documentary was in the works, and tried to be helpful in providing credentials on the few occasions Chopra sought access to home games. Beyond that, the answer of how much Brady’s bosses were informed about “Tom vs. Time” remains shrouded in some Patriot-esque mystery.

…In addition, Belichick is almost completely absent in the series. His offensive coordinator, Josh McDaniel, rather, is portrayed as Brady’s ever-present coaching foil, making cameos via speakerphone (or video chat) as Brady pores through game film and brainstorms ideas for new plays for upcoming games.

So there could potentially be some tensions arising from this. In any case, it should be an interesting watch, given how reluctant to speak on personal matters Brady has usually been. Why’d he decide to do this, and to do this in this way? There are some notable quotes from him and Chopra on that front in the release:

“I have thought for many years how cool it would be to show fans other aspects of my life and interact with them in a different way,” Tom Brady said. “I have been a part of features in magazines, newspapers and TV shows, but I’ve never tried anything like what we decided to do with this docu-series. I hope fans enjoy seeing what we captured. Gotham is a great storyteller. I think he was able to capture the essence of my off-field life and the love I have for the game of football and my family. And Facebook has been such a great partner as well. I have worked with them for many years, and their unique ability to distribute content and help me connect with fans was a really great opportunity. I think we captured something special in this and I am proud of the entire team of people who worked hard to make it happen. The docu-series is intimate, in-depth and more personal than anything I’ve released on my social channels, so I think it will be a great way of extending my reach to people on Facebook Watch.”

“My goal working with Tom – who has truly achieved unprecedented success on the field over the course of the last 18 NFL seasons – was to understand the anatomy of that greatness,” series creator Gotham Chopra said. “To get an inside look and see that he’s not some alien or genetic freak, but that there’s a relentlessness and humanity to his training – physically, mentally, spiritually – and that it truly takes a village with equally impassioned teammates, coaches, and family members, it actually makes his success that much more impressive.” Chopra adds, “I’m grateful to Tom and his family for letting me in and for Facebook for their willingness to really allow me and my team incredible creative freedom. I think viewers are going to really like the end result.”

Tom’s a little different, because I’ve been a fan of the Patriots my whole life and he’s become an institution for the Patriots. Tom used to spend his offseasons in part in Los Angeles, and we had mutual friends, so I met him. Like I said, I’ve been talking about this forever, this is my point of view on sports. So then I shared it with him and Tom’s like “Yep, I get it, I know what it’s like, every Sunday for me is a spiritual experience. I know what it’s like to try and perform at the highest level in front of 65,000 screaming fans. There’s a certain discipline that kind of goes into that, and for me it’s very spiritual.” So we started talking more and more, and Tom said “I’d love to be a part of this; tell me how.” Tom doesn’t come from a producing background, but I thought it would be cool to involve him and figure out the details later.

Over time, what’s happened is he’s actually become quite involved on a creative level. I show him stuff, I talk to him, even just at the very beginning about the sports we were thinking about exploring. And he’s responded to that. Because all of us…when you look at the first season, some of the sports are rodeo, and (MMA) fighting, and NASCAR, they’re slightly off-the-radar sports, at least for the mainstream fan, and Tom also was curious about that. So he’d say “If you’re going to talk to Dale Earnhardt Jr., here are some of the questions I’d be curious about. Somebody who’s at the top of their field, I want to know what it’s like for someone like that, if they experience the same things.” So he’s been pretty engaged in that way.

We’ll see how this new show turns out, but it certainly seems likely to create a substantial buzz given the rare look behind-the-scenes at Brady. And that may be especially relevant considering the reporting around the Patriots, Brady and Belichick.