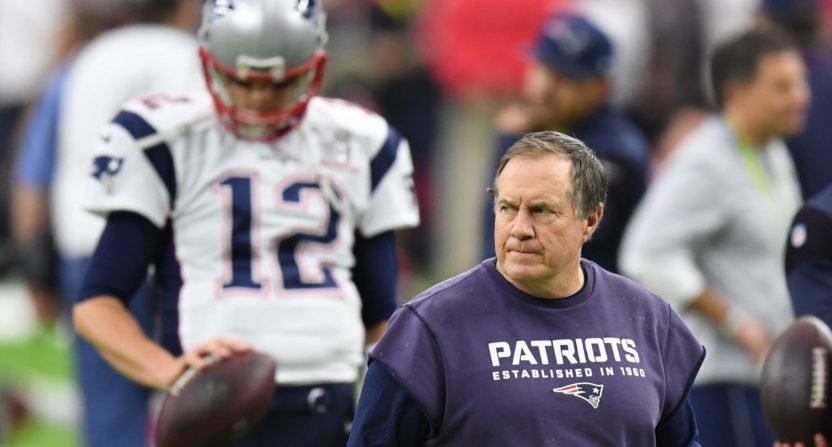 Source: ESPN readying new hit piece on Bill Belichick, Tom Brady and Robert Kraft set to publish tomorrow morning at 8am. The topic will be a power struggle among the trio as to who deserves the most credit for the dynasty.

Immediately, a fanbase still bitter over ESPN’s reporting on Deflategate organized in anger, accusing the network of sensationalizing the story or pushing “fake news.” Before anyone had seen the piece, it was despised by an army of us-against-the-world Patriots fans.

When Wickersham’s story landed early Friday morning, it was not quite as sensational as advertised. The piece described Patriots brass knocking heads a bit about Brady’s controversial trainer Alex Guerrero and over the future of backup quarterback Jimmy Garoppolo. But in the end, it painted Brady, Belichick, and Kraft as proud men who inevitably fell victim to success. The most provocative line suggested that this “might be” the final year together for the trio.

But by the time anyone actually read the report, Boston’s fury and outrage had been unleashed. What Wickersham had written was less of a story than what people thought he had written. What could have been a piece the sports world discussed for a few hours before moving on instead became a national controversy, mostly because someone within ESPN leaked to Allen that it was coming, stoking the flames and building anticipation.

ESPN's Patriots story was much less dramatic than it was billed earlier today. I didn't walk away thinking too much of the dynamic.

In the short term, ESPN will benefit greatly from all this attention, reaping huge traffic on Wickersham’s piece and spending all day discussing Brady, Belichick and Kraft on all its shows. But beyond the likely surge of interest, this whole ordeal will wind up looking like a blow to ESPN.

At this moment, people across America are debating whether the company has it out for the Patriots, whether it uses too many anonymous sources and whether the sensationalism sometimes apparent on its TV airwaves is reflected in its reporting. For all the criticisms leveled against ESPN, it’s typically tough to impugn the company’s investigative reporting. ESPN employs accomplished, experienced reporters (including Wickersham) who know how to get information others can’t.

Most knocks on, say, ESPN’s “embrace debate” TV presence come with a disclaimer about all the great reporting done by Outside the Lines and a cadre of talented magazine reporters. ESPN executives can’t be pleased to now see that side of the company under intense scrutiny. The one aspect of ESPN typically untouched by high-pitched anger now has a major media market intensely angry at it.

We’ll presumably never know who leaked information about Wickersham’s story to Allen. More likely than not, it was some anonymous copy editor, digital producer, or homepage editor. But whoever it was sure gave ESPN quite the headache Thursday night into Friday morning.