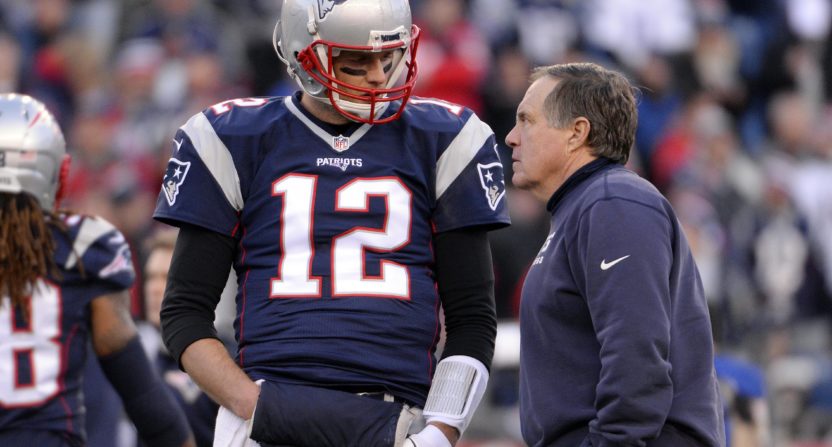 Last Friday, ESPN published a story by feature writer Seth Wickersham describing tension among Patriots quarterback Tom Brady, coach Bill Belichick and owner Robert Kraft. New England fans, who had been riled up by a night-before warning that the piece was coming, immediately bashed the report, questioning Wickersham’s use of anonymous sources and accusing ESPN of an anti-Patriots agenda.

In an interview with Sports Illustrated’s Richard Deitsch published Sunday, Wickersham defended his reporting and addressed his accusation that other reporters have backed him privately while calling him out publicly.

Wickersham said he harbored no animosity toward the Patriots or Boston in general and in fact greatly enjoyed the city. He noted that he had written positive stories about Brady and Belichick in the recent past, suggesting some of the New England-fan backlash likely owed to lingering frustration over the 2015 DeflateGate scandal, which ESPN has been blamed for inflaming.3

ESPN publishes and broadcasts so many stories on the Patriots. I’ve written so many stories on the Patriots in my 17 years at ESPN The Magazine, on Brady and Belichick, both with and without access, and I’m proud of them all. The 2015 From Spygate to Deflategate piece that I co-authored with Don is still remembered bitterly by some, not all, Patriots fans, and so much of the “hit piece” nature of this past piece is falsely rooted in the false response to that one. All the stories are nuanced and complex and, in the end, about people. This year, I’ve written four stories on the Patriots. My feature on Belichick before the Super Bowl and my feature on Brady after the game didn’t elicit the charge that me or my company had a bias. Our Brady story in November and the Patriots one last week did. So it goes.

Wickersham then defended his use of anonymous sources, calling them “the coin of the realm of high-stakes reporting” and explaining that he had “more than a dozen sources on this piece, most of whom are inside the walls of Gillette Stadium.”

It’s essential to get to the truth. There’s a code of silence in the NFL. But it also carries a responsibility that I—and our editors—take very seriously. It requires skepticism and a lot of extra work, to verify pieces of information. A lot of reporting that might be accurate will never see the light of day beyond my notebook because it couldn’t be verified. On one of the stories I co-authored with Don, we had a case where a source of his insisted that something pretty amazing happened in a meeting with a few NFL owners. I called someone else in the meeting to ask about it, and that person couldn’t verify it. We didn’t include the piece of reporting in our story, and a week later I was told from a different source that it was indeed dead on. It was a bummer but it’s best to be cautious.

As with any meeting with any source, on the record or on background, it’s essential that I have follow-up conversations and chances to go through pieces of information again and again to make sure that it’s right, to add context, to verify it against what other people have said. I never just take people’s word for it, even from sources I’ve known for years. I’ve done a lot of stories in my career that required anonymous sources, and I really appreciate what Peter King wrote yesterday when he said, “Those stories, with the benefit of history, have largely been shown to be accurate.”

Deitsch brought up an interview Wickersham had done on Boston sports talk radio in which he said local reporters tweeted critically about his story but then messaged him to say he had the details right. Though Wickersham declined to identify those colleagues, his comments on the subject were compelling.

On the Boston-based Dale and Holley Show on WEEI you said, “Some of these reporters will tweet something that is contradictory to my piece and reporting and send me a direct message saying it is dead on. I don’t know why they do that.” Do you wish to disclose the reporters?

Wickersham: No, but I appreciate you asking.

What is your best guess as to why that happens?

Wickersham: Let me clear: I’ve never covered a team on a daily basis. I have a lot of respect for those who do. It’s demanding and unrelenting. Twitter has changed it so much, and not necessarily in a good way, some of my friends who cover teams have told me. You have to stay on top of so many things at once, and those who are the best at it are sheer grinders. As to those exchanges over DM and text, I still don’t know why it happens. To be fair, many writers who cover the Patriots as a beat or regularly—Albert Breer, Tom Curran, Greg Bedard, Ben Volin and his colleagues at the Boston Globe, and others—have reported on aspects of the tensions inside the building this year. People know. I tried to add as best I could to their fine reporting.

Wickersham’s responses probably won’t satisfy Patriots fans who are entirely sure ESPN is conjuring controversies to take down their team. But his comments do offer an interesting glimpse into his process. You can read the whole interview right here.