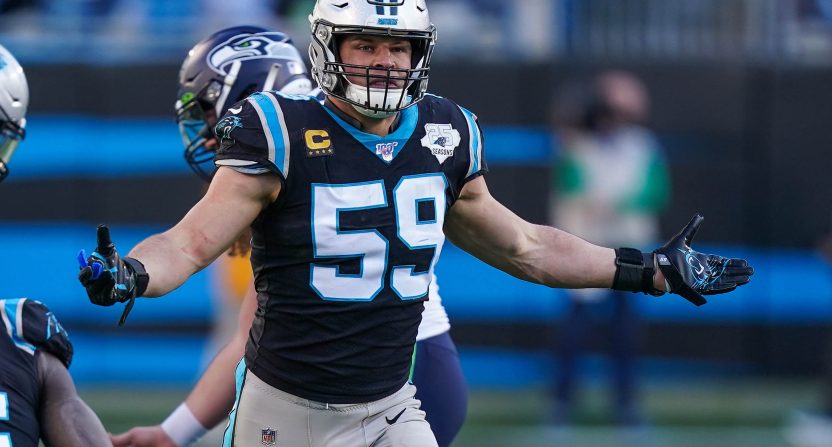 Luke Kuechly retired from the NFL after the 2019 season and months later, he mentioned broadcasting as a possible future job.

He instead decided to go into scouting, and the broadcasting dream was temporarily dashed.

I say “temporarily” because on Monday, the Carolina Panthers announced that Kuechly would be joining the organization’s radio broadcast team.

The 31-year old will team with new play by play announcer Anish Shroff, reporter Kristen Balboni, and either Jordan Gross or Jake Delhomme as the other analyst. He’ll call seven games this season, six at home (Weeks 1, 4, 5, 7, 12, and 15) and one on the road (Week 9 in Kuechly’s hometown of Cincinnati). When Kuechly isn’t in the booth, Jim Szoke will take his place.

In comments to the Panthers website, Kuechly seemed excited about his new role and discussed how he’d have to get used to broadcasting.

“There’s going to be a learning curve, and things happen way faster in the booth. To be able to deliver a concise message and paint a picture for somebody is something these guys are really good at, and I’m going to have to get used to.”

After spending so much of his life watching game tape, Kuechly’s used to being able to rewind if he sees something unusual or interesting. There’s no clicker on this broadcast, though, which will require him to adjust.

“Watching tape, I can rewind, I can pause, I can fast-forward, I can skip a play. But here I get one shot and go. It’s fun,” he said genuinely, because that’s how Luke Kuechly says things. “To see the field from a different angle is cool, and it’s fun to see it from this high, because it looks so much slower. When you’re on field level, everything looks like it’s moving so much faster because you don’t have that perspective from being high.

“The perspective from up here is really cool.”

If Kuechly is good at this, will a national network come calling? It wouldn’t surprise me. He’s still young and is recently retired, so it seems like there would be plenty of interest from a network like CBS or Fox for a game analyst position if he excels with the Panthers.