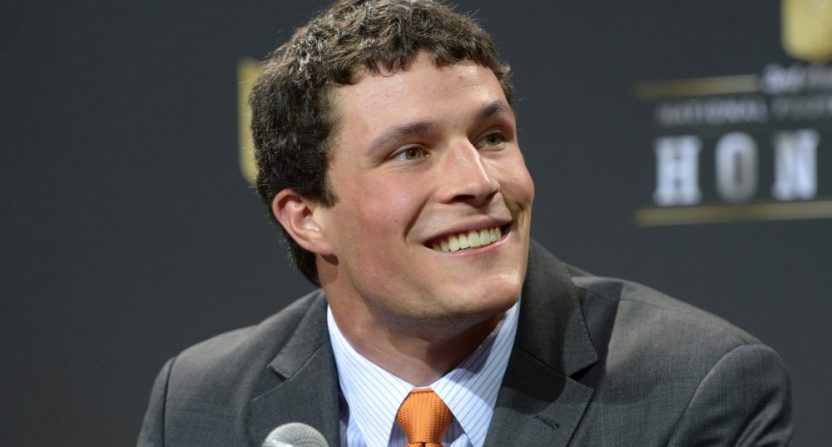 Luke Kuechly’s post-retirement plans won’t include a move to broadcasting. At least not yet.

The recently retired Carolina Panthers linebacker is staying with the team as a pro scout. The hiring was officially announced on Thursday.

Kuechly played all eight of his NFL seasons with the Panthers, earning Pro Bowl honors seven times and winning the Defensive Player of the Year award in 2013.

In an April interview with Mike Tirico on NBC Sports Network’s Lunch Talk Live, Kuechly was considering his options among broadcasting, coaching, or a front-office role. While he sounded interested in broadcasting, Kuechly’s energy seemed to pick up a bit while talking about coaching and the experience of former teammate and current Panthers special teams coordinator Chase Blackburn.

“[Blackburn] said ‘It’s the closest thing that I feel like I’ve gotten to playing the game,'” Kuechly told Tirico. “So there’s a way to do it; you’re never gonna be able to replicate being on the field. But I think there’s plenty of avenues where you can not only get in, but there’s an opportunity to work your way up once you do get in.”

If working with and teaching players is what really appeals to Kuechly, scouting might not allow him that direct rapport. Though maybe he can still be in the film room and meetings with the team. Film study was a big part of Kuechly’s preparation as a player and should right in with his job as a scout.

“During the season, it’ll be player evaluation and then advance scouting stuff,” Kuechly said to Panthers.com’s Bill Voth. “So if we play a team next week, we’ve got to get everything set up and ready to go, so when the coaches come in on Monday, they’re not starting from square one.”

As Kuechly said to Tirico, getting in is the first step. When asked if he wanted to advance through the front office, he was non-committal. But moving from scouting into coaching is certainly possible too.

Unfortunately for those intrigued by Kuechly becoming a broadcaster, it appears that he’s more interested in a role closer to football. (“Luke’s” like we’re… “out of Luke.”) It’s too bad because Kuechly’s personality could potentially shine in the booth or studio. Plus, NFL TV analysis doesn’t always provide enough from a defensive standpoint.

But Kuechly is also very young (he just turned 29) which gives him the opportunity to try everything he’d like. Scouting or coaching? Football operations? Broadcasting? He might be able to do it all in what appears to be a long, bright future.