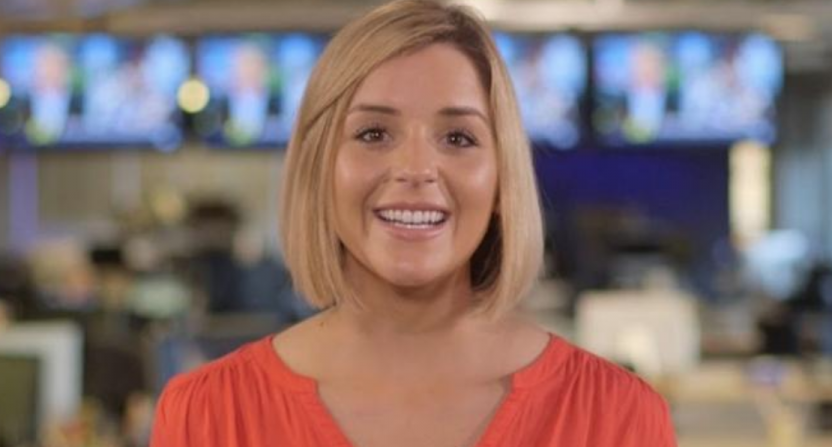 After announcing she was leaving Stadium in mid-March, veteran reporter and studio host Kristen Balboni is heading home for her latest gig.

On Tuesday, the Carolina Panthers introduced Balboni as their new team reporter. Working for the Panthers is a return home for the TV personality, who grew up in Pinehurst, North Carolina and attended the University of North Carolina in Chapel Hill for college.

In her introduction on the Panthers’ official website, Balboni said that she’s always maintained a connection to her home state and favorite NFL team as her career took her to Connecticut, Los Angeles, and Chicago:

“[…] no matter where I was living and what I was doing, I’ve always been able to take one little piece of home with me – Panthers Sundays (or Mondays or Thursdays).

“Whether I’m watching from home and live-tweeting the entire time (#KeepPounding) or meeting up at a bar with a bunch of other displaced Panthers fans, this team has kept me feeling connected to my home state of North Carolina. I even got to cover Super Bowl 50 for FOX Sports, which I’ll never forget.”

Can’t believe I get to say this, but I’m moving back home to cover the team I love – the @Panthers. I’m already overwhelmed by the incredible support from this amazing fanbase. Let’s go!! https://t.co/v1C5QFDNpb

Balboni had been with Stadium since 2018, joining the digital network as a sideline reporter and studio host covering college football and basketball. In an interview with Awful Announcing’s Andrew Bucholtz, she talked about her on-air role expanding:

“I’ve just had the best experience with them on the live events side, and I’ve had time to meet their studio people, so when they came to me and said ‘Would you like to do a hybrid role, where you’re still going to get to travel and be at our biggest events, you’re going to be our lead reporter, but we’d love to have you in studio and bring some of that creative freedom into the studio?’ it was something that I couldn’t turn down because of the experience that I’d had with them so far.”

Prior to joining Stadium, Balboni began her sports media career as a researcher at ESPN, establishing herself as an on-air talent with the Mike & Mike radio show and TV simulcast (and hosting the Behind the Mikes podcast), in addition to the network’s fantasy football coverage. She then moved to Fox Sports to host The Buzzer for FoxSports.com and FS1.

It feels weird to talk about work right now with everything that’s going on, but I just wanted to take a moment to express my gratitude to my @Stadium coworkers as my career heads in a new direction. pic.twitter.com/VSWQanVYLs

Her experience as an on-camera host and reporter provides the Panthers with a versatile online personality who can report team news, interview players and team personnel, as well as create compelling features for Carolina’s website. That’s an advantage compared to reporters that other NFL teams have hired for their in-house media, many of whom were previously beat reporters from print outlets.

With new head coach Matt Rhule, his coaching staff, and an overhauled roster (including Teddy Bridgewater replacing Cam Newton at quarterback), Balboni should have plenty of content to produce for Panthers fans in introducing the team’s new coaches and players.