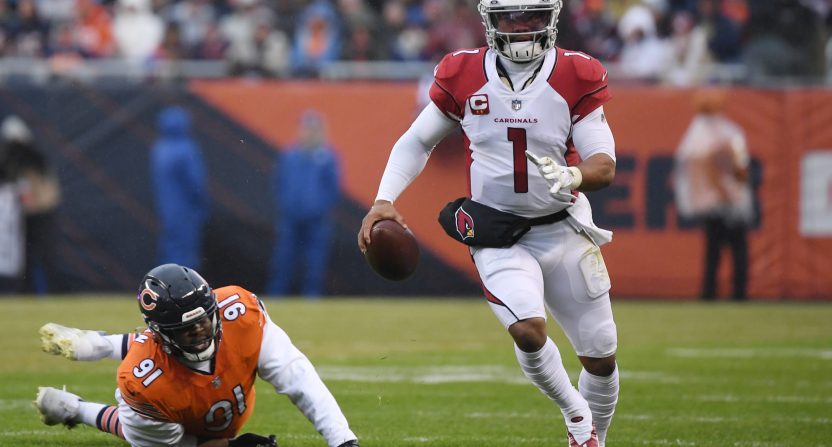 One of the stranger stories of Super Bowl Sunday doesn’t have anything to do with the participating teams. It’s the Cincinnati Bengals and Los Angeles Rams playing in Super Bowl LVI, but there’s been a surprising amount of chatter about the Arizona Cardinals and quarterback Kyler Murray, the first overall draft pick in 2019. And an ESPN report from Chris Mortensen kicked that up further.

Before we get to Mortensen’s report, there’s some context to note. To start with, the Cardinals lost five of their last six regular-season games, and Murray struggled in the team’s 34-11 playoff loss to the Rams. That was especially true in the first half, where he posted seven completions on 17 passing attempts for 29 yards (an average of 1.6 yards per attempt), two interceptions (one a pick-six), and a 9.3 passer rating. On the day, Murray finished with 19 completions on 34 attempts for 137 yards with no touchdowns and those two interceptions, and Arizona only posted 183 total offensive yards. And Murray and other Cardinals’ players expressed a lot of frustration afterwards, with Murray specifically saying “It’s disappointing that we didn’t make it a game and come out and play the football we know we’re capable of playing. That’s really the most disappointing part.”

Losses happen, of course, as do bad individual performances. And Murray was not the only one to take a lot of flak after that loss; head coach Kliff Kingsbury reportedly heard a bunch from owner Michael Bidwell after that game as well, although the specific manner he heard those complaints in is a bit disputed.

What’s more unusual is what we saw this last week. There, Murray unfollowed the Cardinals on Instagram and removed all but two photos from his Instagram account. The team then, funnily enough, followed suit a couple of days later, removing all photos from their own Instagram account except one of them drafting Murray in 2019 and one from this year’s Pro Bowl. But Mortensen then kicked this up a notch with a pair of tweets Sunday:

Where’s it headed?
Despite the acrimony, the Cardinals expect things to calm down and Murray is their QB.
Select veterans hope to reach Murray on how he handle adversity better.
Coach Kliff Kingsbury also is self-scouting where he can provide better alternatives for QB.

In the unbylined ESPN.com story that was published a couple hours later on this, they also threw in comments from former Cardinals’ receiver Larry Fitzgerald, presumably obtained by ESPN reporter Josh Weinfuss (the bottom of the story has “Information from ESPN’s Josh Weinfuss was used in this report,” and everything else in that story appears to just be based off Mortensen’s tweets):

Former Cardinals wide receiver Larry Fitzgerald, who played two years with Murray, wasn’t sure what to make of the quarterback’s social media move, but said Tuesday he hopes the two sides get whatever it is they both want.

“I haven’t talked to Kyler in a while but he looked good in the Pro Bowl, looked like he was having a great time, throwing touchdowns out there,” Fitzgerald said Tuesday. “I just hope everything works out the way both sides want it to work out. That’s really what it’s all about for me. I love Kyler, I love the Cardinals and I want the best for everybody.”

There are a couple of things that are interesting about this story. For one, Mortensen’s two tweets are very different in tone; the first one has some really strongly-worded criticisms from anonymous sources, but the second one says this ultimately may not amount to changes. And that second tweet is quite important here, and it actually elevates this as a story; Mortensen is making it very clear that there is this frustration and tension from both sides, but that, at this point, it doesn’t appear to be headed for an immediate breakup. That seems pretty reasonable for all sides, and that helps this report be taken more seriously.

The anonymously sourced comments in that first tweet are also interesting. Unlike with a lot of anonymous scouts’ comments (a bunch which were passed along on Murray ahead of the 2019 draft) on draftable prospects, there’s a stronger reason to take these remarks at face value and to consider them worth publishing. We know with the NFL draft in particular that many front offices are intensely focused on media coverage ahead of the draft, and that leads to a lot of incentive to plant false tidbits of criticism for a player the team likes or praise for one they don’t.

With Murray, though, there doesn’t appear to be that kind of incentive. It doesn’t seem highly beneficial either for the Cardinals’ camp or Murray’s camp to put anything negative they don’t mean out there about the other side. The most likely outcome here seems to be that Murray stays with the Cardinals for at least a couple more years (he’s still on his rookie contract, and they can pick up his fifth-year option before May; he also could sign a new contract, the way Josh Allen did recently). So these seem to be honest expressions of frustration from both sides, and there’s news value to that. None of that means that the Cardinals’ figures here or Murray’s camp are correct to say these things about each other, but it is notable that they are saying these things to a reporter.

And while anonymous sourcing shifts the focus of credibility from the source to the reporter, that’s not really a large problem in Mortensen’s case given his long, accomplished, and respected tenure covering the NFL. He’s not the figure you’d likely see this originating from if there wasn’t anything to it. And the Cardinals’ muted statement only seems to add to Mortensen’s reporting:

"We are excited to continue that improvement in 2022 and are excited that Kyler Murray is the quarterback leading us." (2 of 2)

All in all, this is a notable story to have emerge, especially on Super Bowl Sunday. Murray had previously expressed some frustrations with the Cardinals, and there had been some rumblings that the team brass wasn’t completely thrilled with him either, but the language in Mortensen’s report really suggests this as a more notable divide than anything to date (including Instagram unfollowings). And it’s remarkable to have these two sides bashing each other  publicly in these terms, even anonymously and through the filter of a reporter. But it’s significant that even with that report, a Murray-Cardinals divorce doesn’t seem imminent. This situation will certainly be worth keeping an eye on, though.