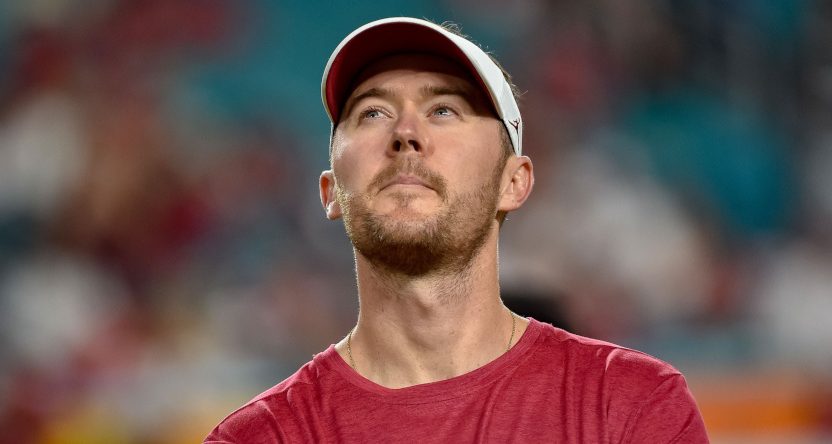 It’s a yearly tradition. Someone in NFL media forwards an anonymously-sourced report about a top draft prospect’s troubles behind the scenes. At this point you could make your own mad lib about it and get in the ballpark.

It’s also a guarantee that the story is going to dominate the news cycle for a couple days in early March while we all impatiently wait for the NCAA Tournament to begin.

This year, it’s NFL Network analyst Charley Casserly’s “report” that Kyler Murray bombed his combine interviews according to some anonymous executives at some NFL teams that is causing mass hysteria. Casserly has been called out by many for forwarding these anonymous opinions, especially given how little context there truly is to them. One more person to call out Casserly was Murray’s former college coach at Oklahoma — Lincoln Riley.

Riley appeared on The Dan Patrick Show Wednesday and defended his former Heisman-winning quarterback. He also expressed exasperation over the comments being put into the public record.

“I have personally spoken with the majority of teams that [Kyler Murray] met with, and every one of them were glowing in their reports about Kyler.” Oklahoma coach Lincoln Riley refutes the report made by Charley Casserly of Murray’s poor performance at combine pic.twitter.com/hyDZJrIVPI

The standout element to this clip is just how resigned Riley sounds to all this, as it is now commonly expected in the NFL universe that top prospects are going to have their character questioned by “Anonymous Middle Management Guy A” just because they can. As if this is just the norm.

Of course Riley is going to take Murray’s side in this story, but we’re never going to know what the truth really is here, which is all the more frustrating. Did Murray really tank his interviews? Is it a smokescreen from teams that actually like him? Or is he assured of being taken #1 overall by the Cardinals?

Unfortunately, the draft prospects don’t have much of an ability to defend themselves or answer to these criticisms because they have no idea where they are coming from or even how legitimate they truly are. In what process other than the NFL Draft do athletes have to suffer through these shots lobbed in their direction from anonymous front office types who won’t attach their names to the criticism and instead get them shared unabated through the media to serve whatever purpose they wish? It’s not a fair process. and it’s almost up to college coaches like Riley (as well as people like Murray’s agent) to defend their players against such criticism.

This is about more than smokescreens and draft moves, it’s about the character and reputation of these athletes. At least nobody questioned Kyler Murray’s cooking this time around.