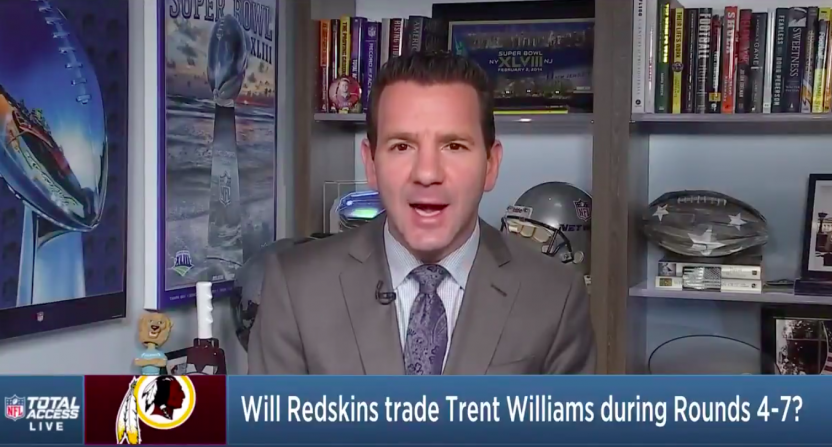 NFL Network reporter Ian Rapoport is no stranger to getting called out over some of his reporting. The NFL insider is often reporting on topics that people might not want to get out or might be more fluid than the news implies. Still, Rapoport is fairly consistent across the board. But that doesn’t mean much for NFL left tackle Trent Williams’ agent, who called out the reporter over the weekend over what did or did not go down before his client was traded from the Washington Redskins to the San Francisco 49ers.

From @NFLTotalAccess Live: The long-awaited trade of #Redskins LT Trent Williams to the #Vikings didn't happen and is now off the table. The selection of Boise State OT Ezra Cleveland solidified that. pic.twitter.com/feGij7tqq0

Friday, in the midst of the NFL Draft, Rapoport reported that Williams, who had been seeking a trade, expressed that he would “rather not” land in Minnesota, despite the fact that the Vikings were in the “constant contact” with the Redskins about the possibility. The Vikings drafted LT Ezra Cleveland because, as Rapoport noted, Williams’ desire not to play there “ended the trade right there.”

However, Williams’ agent, Vince Taylor, took the added step of publicly stating that the reporting Rapoport had done was “false” and that he would respect the negotiating decisions of the Redskins. Taylor did say that he identified potential trade partners before the Redskins started negotiations.

“On behalf of my client Trent Williams and with the permission of the Washington Redskins I sought trade opportunities for the Redskins to trade Trent,” Taylor said. “Once I identified the potential trade partners, I wanted to respect all teams’ rights and the process and allowed the Redskins to negotiate directly with the other teams.

“There has been false reporting that Trent and I objected to particular trades. I will continue to respect the Redskins’ right to negotiate a trade, and hope that the negotiations quickly lead to a trade that is in the Redskins’ interest, Trent’s interest, and the interest of the other team.”

Meanwhile, Rap took to the air to refute the refuting of his reporting, calling Taylor’s claim “false” as well.

“[Williams], from what I understand, did not want to go to the Minnesota Vikings. Preferred to play elsewhere. That message was communicated. I’ve received confirmation from several sources on this despite the fact that as you just tweeted, Trent Williams’ agent Vince Taylor just released a statement calling it false reporting.

His statement is actually false. What I reported is true. Either way, he’s not going to the Vikings…… I’m just saying, he’s wrong. What do you want me to say?”

Williams was traded to the 49ers soon after.

So there you go. As we said, Rapoport is no stranger to getting called out over the veracity of his reporting. ESPN’s Louis Riddick once called Rapoport “deadass wrong” for saying the Kansas City Chiefs had reached out to him for their GM position. Rapoport’s reporting has taken criticism over reports about Washington and for overstating an injury to Drew Brees in 2015. Mychal Kendricks once said Rapoport “will never have my respect” after he reported incorrectly that Kendricks was going to the Browns. There was the whole to-do over his report that Antonio Brown was headed to the Bills. And who could forget Chris Mortensen and RatTweetGate?

But, as we said, Rapoport has also gotten countless reports correct over the years. Those incidents just don’t get any kind of visible notice because, well, that’s what we’d expect. So, take all of this as you like and just remember to consider who has more to gain in situations like these.