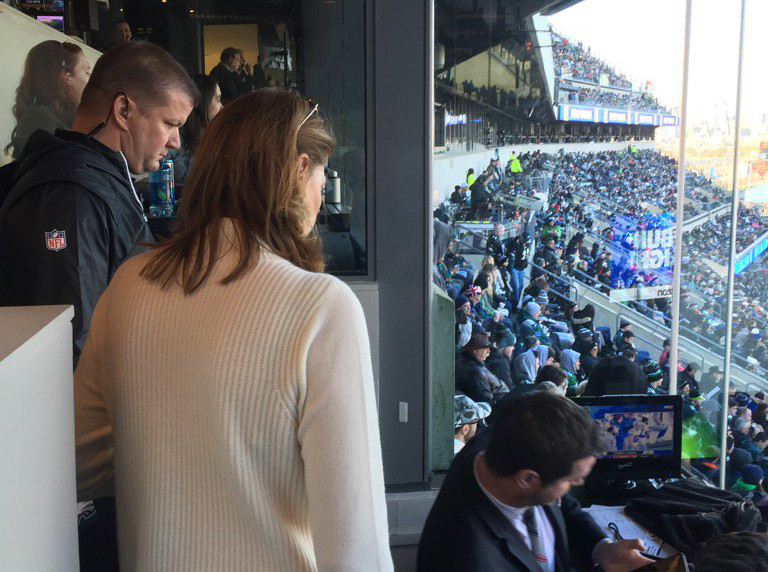 A team trying to crack down on individual media members or outlets covering it often backfires in a big way, and the latest example comes from the backlash the Philadelphia Eagles received after ejecting Philadelphia Inquirer beat writer Jeff McLane from the press box during their win over the Dallas Cowboys Sunday. That ejection sparked immediate backlash from other media in the press box and intense internet criticism from sportswriters across the nation.

The ejection has since been followed by a scathing column from the Inquirer‘s Bob Brookover bashing Eagles’ senior vice president of marketing, media and communications Anne Gordon (a former Inquirer managing editor, seen at left above convincing the seated McLane to leave) for her decision to throw McLane out.  It’s also spawned a Ringer oral history from John Gonzalez (a former columnist at the Inquirer and CSN Philadelphia) talking to people in the press box about what happened and why it created such a backlash (including from one of McLane’s biggest competitors, Daily News beat writer Les Bowen, who got into a high-profile fist fight with McLane back in 2011). First, here’s the key part of Brookover’s piece:

Anne Gordon embarrassed herself and the Eagles organization Sunday afternoon by providing misinformation and stepping way outside the bounds of reason. In essence, she misused her position of power inside the press box and this should upset you as a reader and Jeffrey Lurie as an NFL team owner.

Gordon, the team’s senior vice president of marketing, media and communications, made an egregious mistake that she should have learned to avoid on the first day of the job she has held since November 2012.

Never, ever take a minor squabble and turn it into a major incident.

Many of those who spoke to Gonzalez offered similar sentiments:

Bowen: I felt that was important to do, to get that out there. Certainly sportswriters across the country, I felt like everyone needed to know what’s happening. When have you ever heard of someone getting ejected from a press box?

Bob Ford (Inquirer columnist): I’ve never seen something like that. But I’ve only been doing this 40 years.

…(Radio host Angelo) Cataldi: We absolutely hate each other when we’re competing. And then we immediately team up when necessity arises like this.

Ford: We all might be biting at each other, but we’re all in the same foxhole.

…Eliot Shorr-Parks (NJ.com Eagles writer): Even though Jeff and Les literally hit each other, they stand up for each other.

This is far from an isolated case, too. We’ve seen teams try to crack down on the media time and time again, especially from plenty of college football coaches, and it usually winds up backfiring this way. It’s also fascinating that this started not with a coach, as you’d expect, but with a senior vice president for marketing, media and communications, one who definitely should know better.

Regardless of whether McLane’s discussion with the Eagles’ staffer who reportedly yelled at him and others to be quiet was reasonable or not (it seems to have been calm and reasonable from all the writers’ accounts, and the team hasn’t offered much of a defense for their actions), trying to pull a power play like this in the middle of a game is absolutely the wrong move. If there was a real issue, it should have been addressed with him afterwards, or with his bosses.

Ejecting McLane not only prevented him from doing his job, it created a PR disaster for the Eagles. It also got everyone talking about what happened in the press box instead of the win over the Cowboys the team recorded on the field. Maybe other teams can learn from this, though. If you target one outlet or one writer in a seemingly-unfair manner like this, you’d better be ready for the backlash.

[Photo from Marcus Hayes of the Daily News]