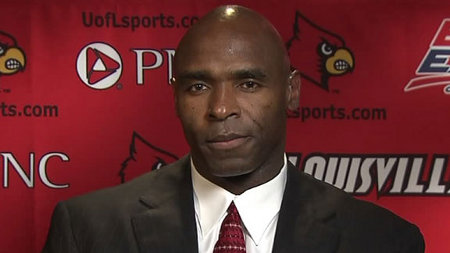 At some universities, teams and coaches take pride in each other’s accomplishments, whether that’s through showing up to other teams’ games, doing cross-promotional events or just saying nice things about coworkers and letting them have the spotlight when it’s their turn. That doesn’t seem to be the case at the University of Louisville, where football coach Charlie Strong is apparently upset that local media dared to cover the men’s basketball team’s remarkable run to the Final Four in more depth than his relatively insignificant spring practices. Strong’s reported response? Ban local media outlets from covering his team (but remain willing to do high-profile and contractual national interviews, of course).

It’s worth pointing out that the story so far is only from one side, as Strong apparently plans to publicly address the issue in a press conference Thursday. If what’s been reported so far is accurate, though, it’s tough to think of how he could justify this; some reports say it’s just local TV stations banned, while others seem to indicate it’s cross-platform. Regardless of the extent of the ban, this doesn’t look good for Strong, though.

For one thing, a move like this looks incredibly petty on Strong’s part. There’s no need to gripe that his out-of-season practices aren’t getting wall-to-wall coverage when the basketball team’s having their best NCAA tournament in years, including making it to a Final Four matchup with in-state rival Kentucky. It also looks like Strong has no comprehension of how media outlets work; beyond the superior news value of the basketball stories, they’re also interesting to many more people than a spring practice report. So, it wouldn’t make sense on any level for media outlets to ignore basketball in favour of football spring practices. Beyond the appearances, though, this approach is unlikely to do anything positive for his team; he’s just given a lot of local media types extra reason to criticize him when things start to go wrong (and less reason to ratchet up the hype for football season).

Beyond the ramifications of this for Strong and the program, though, this story has some disturbing reflections of how the sports media landscape as a whole is changing. With the rise of teams’ in-house content (websites, Twitter and Facebook efforts and more), many organizations at both the NCAA and the professional levels are more focused on controlling their message than they’ve ever been, and they’re fighting more and more wars like this whenever outside media coverage doesn’t go their way. The larger dollars being paid for broadcast rights don’t help matters, either, as that can lead to broadcasters getting more and more exclusionary access and being forced to tailor their content to what the organizations want. That shift in power to the organizations being covered can lead people like Strong to think they can dictate coverage terms to their local media, and that’s problematic for fans; every media outlet has its own problems, to be sure, but having independent media outlets covering local sports tends to mean fans will learn a lot more than just what the team wants them to see, and that’s a great thing overall. Here’s hoping these reports are overblown and Strong announces Thursday that the whole thing’s a mistake; given the current media landscape and the rising tensions between teams and the outlets that cover them, though, that may not be worth betting on.