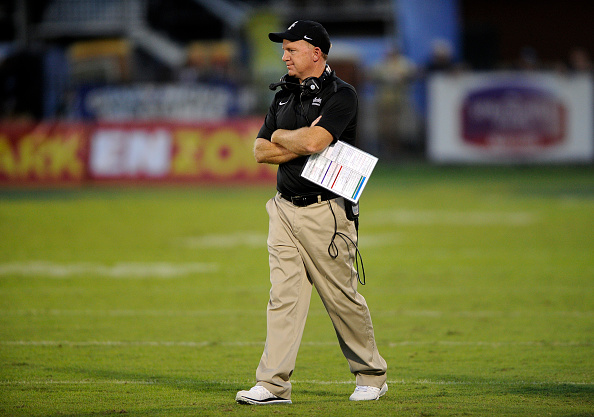 Idaho head football coach Paul Petrino is making waves yet again for his treatment of the media. Moscow-Pullman Daily News sports editor Michael-Shawn Dugar wrote that Petrino screamed at him, swore at him and threatened him physically during a Aug. 19 practice, and while Petrino denied those charges in a statement (Dugar stood by his story), they still drew plenty of attention. Now, it seems that Petrino is trying to seek retribution against Dugar by denying him access to practices while providing that to other members of the media. Interestingly enough, though, those other media outlets aren’t going along with the plan. The UI Argonaut, the university’s student newspaper, declined to cover practice themselves after Dugar was denied that access:

Earlier this month, a spokesperson for Vandal Athletics sent out an email notifying media that football practices would be closed to the media. But these new rules didn’t apply to everyone.

Previously, Vandal Athletics had allowed members of the media to attend and observe certain practices as long as the appropriate spokesperson was notified 24-hours in advance. This was not a universal policy for higher-education athletics.

Now, media as a whole are only invited to the last 10 minutes of specific practices and to any news conferences.

Instead of blanketing the new rules and regulations for media to every news organization, Vandal Athletics decided to pick and choose whom it would allow at practice. Specific reporters from the Argonaut and the Lewiston Tribune were notified they were still allowed to attend one football practice a week.

The call to the Argonaut stated that as an organization we have shown our ability to follow media policies and would therefore be granted access.

Vandal Athletics has selected out the members of the media who they feel don’t deserve access to practice. But it should place the same rules on all media, not discriminate between them.

Because of this, the Argonaut will not be attending football practices — even though permission has been granted to us — until other members of the media are allowed. The Lewiston Tribune has also decided not to attend practices.

The selective favoritism of media is unacceptable. As a news organization, the Argonaut will stand with the Lewiston Tribune and its other media partners, including those banned from practice.

Dugar also noted on Twitter that the limited access was targeted at him, and that the university wouldn’t give him a specific reason why:

Three guesses who those "certain" members of the media are. https://t.co/Wvyxz9b7Ya

Important sentence in that column: "reasoning behind the decision is unclear." I asked UI why I can't attend. Answer: it's their prerogative

It’s positive to see the Argonaut and the Tribune standing in solidarity with Dugar here, as it would have been easy for them to seize a competitive advantage by taking that access to practices they were offered. Their decision not to is strong from a journalistic perspective. At the same time, though, the university looks very capricious here by selectively denying access to a critical outlet. We’ve seen that many times before in the university ranks, but it usually hasn’t lasted long once the word has spread. We’ll see if Petrino elects to maintain this decision after taking fire, or if he changes course once others start criticizing Idaho. Either way, it’s a poor move by the Vandals, and one that doesn’t make their program look good.