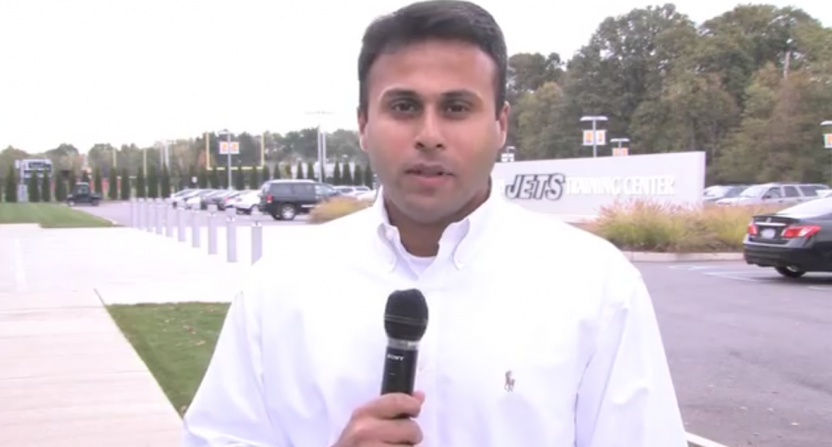 Manish Mehta’s curious, contentious, and controversial tenure covering the New York Jets for the New York Daily News has ended. A day after the paper pulled him off the Jets beat, he’s now been fired by the publication, according to the Washington Post‘s Ben Strauss.

Mehta has become infamous during the past couple of years for erroneous reporting, unusual behavior, and unethical practices on the job. His tactics in using a fellow Daily News reporter to get quotes and ask questions during Zoom calls with the Jets after the team pulled his credential appears to be what ultimately compelled the paper to fire him.

Yet Strauss’s report uncovers a pattern of confrontational, aggressive interactions with other media covering the Jets, in addition to threatening players and team officials for not giving him information.

Jenny Vrentas of Sports Illustrated and The MMQB told Strauss about Mehta becoming unhinged after she asked him not to barge in on a one-on-one interview she was conducting with a Jets player.

“Afterward, in a hallway outside the media room, Mehta screamed at her, according to multiple people who were there, cursing repeatedly: ‘F— you! F— you! F— you!’ The tirade lasted several minutes, these people said, and two other writers had to calm Mehta down.”

ESPN’s Kimberley A. Martin is another alum from the Jets beat who has unpleasant experiences with Mehta to share.

But Charles McDonald (now with For The Win, formerly of the Daily News) revealing that Mehta would take quotes and observations that he didn’t gather to use in his articles without proper attribution, or have McDonald ask dubious questions during media sessions, caused an uproar that the newspaper could no longer ignore.

Never mind that we’re talking about a reporter who allegedly created an Adam Gase burner account, approached general manager Joe Douglas’s 11-year-old son at a baseball game, and threatened bad coverage for a player whose wife criticized Mehta on Twitter.

There is so much more in Strauss’s piece that’s worth reading. He takes a deep dive on this story. In the meantime, where Mehta goes from here will be a story to follow. His success with the Daily News on a very competitive beat is notable, but will other outlets — especially those less inclined toward tabloid coverage — tolerate the kind of behavior now attributed to Mehta?