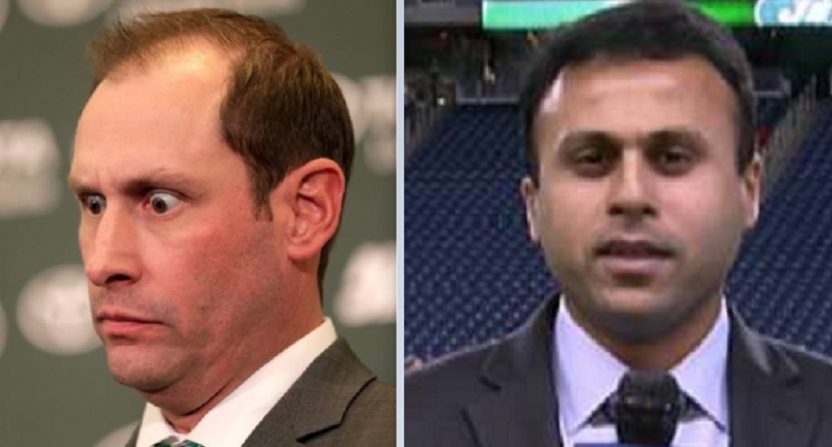 But is it possible that one NFL beat reporter actually did go through with such a thing? New York Daily News reporter Manish Mehta is being accused of just that by New York Jets fans on Twitter, and most notably by Barstool Sports’ Kevin Clancy, aka KFC Barstool.

First, some background on this wild notion. Last week, Mehta wrote an article on the disdain Jets coach Adam Gase has shown toward fans and media who cover the team. According to the report, Gase shields himself from fan criticism by talking about how much money he makes. But Gase has also been told that his demeanor during press conferences is a bad public face for the organization and he’s apparently taken steps to improve his behavior.

But then Mehta shared this nugget:

“In fact, some people on One Jets Drive are convinced Gase or a family member has a burner Twitter account to monitor what is being written or said about him — and defend him if necessary. Gase didn’t respond to several requests from the News for this story.”

The burner account in question is “@WyattV18,” which touted Gase’s ability as a coach and his appeal on the NFL coaching market. The handle is named after Gase’s son and the tweets were all posted when the Jets wouldn’t have been in practice or playing games. The account has now been deleted, but plenty of Twitter users have screen-capped those tweets supporting Gase, including @DannyBagz:

Mehta even asked Gase about this during a press conference on Monday, after the 2019 Jets season ended, and the coach responded as you might expect.

What do you think #Jets fans? @NYDailyNews reporter Manish Mehta, asking Head Coach Adam Gase if he has a Twitter account. Obviously Gase doesn’t have one, but rumor has it that he has a burner. Or does he? Is it coming from Manish instead? #NFL #TakeFlight pic.twitter.com/wT7buiTkdP

Well, maybe you would’ve expected a chuckle, smirk, or sneer from Gase. But that hasn’t been Gase’s approach with the media since taking the Jets job. Mehta reports that the coach feels emboldened by getting another NFL head coaching job so quickly after he was fired by the Miami Dolphins and isn’t changing how he does business because of that. Had he laughed off the notion, would Gase have seemed more believable there? Did his terse answer come off as defensive in any way?

However, those questions are irrelevant and Gase’s response is understandable if he really had nothing to do with the account. And Jets fans following @WyattV18 closely noticed a slip-up that appears to indicate that Mehta himself might be behind the supposed Gase burner account. A link to a Daily News article by Mehta was posted to the account, then quickly deleted. It appeared as if someone posted to the wrong account, then tried to fix the mistake. But fans were watching and ready to screen-cap:

KFC Barstool pointed to other tweets that could implicate Mehta, such as @WyattV18 sloppily referring to “me” in a couple of tweets that accused Mehta of lobbying for a front-office job with the Jets. Those tweets were deleted and reposted with “coaches” replacing “me,” presumably demonstrating that whoever was writing the tweets briefly forgot the role he was playing.

Tweeted “me” then deleted and added “coaches” instead. Guy doesn’t even know how to properly run a burner account pic.twitter.com/SezUl4c4WD

The deleted tweets led Clancy to theorize that @WyattV18 could be Mehta himself because Gase probably wouldn’t have made such a mistake. The last piece of evidence Clancy pointed to was Mehta sending a DM on Twitter, mocking the idea that he was responsible for the burner account.

Is this damning evidence? Hardly. But KFC Barstool knows that and had a joking tone throughout his entire write-up. He admitted he “was completely fucking around” with the accusation to begin with. Yet maybe it’s notable that the @WyattV18 account was deleted after Clancy raised the possibility and it circulated around Twitter. Too much heat on the burner!

This is obviously all speculation based on evidence that’s circumstantial at best. But we do live in times where public figures have allegedly created burner accounts to feign fan support. New York Knicks owner James Dolan may have done so earlier this month, as Awful Announcing’s Andrew Bucholtz pointed out. The most infamous example might be Kevin Durant, who was discovered using #BurnerTwitter when posting to the wrong accounts.

The whole scenario seems silly — outrageous, even — yet Mehta has been harshly, sometimes outlandishly, critical in his tweeting and reporting before. That’s led many to dismiss him as a media personality who tries too hard to get attention. Creating @WyattV18 would certainly fall under that category, especially if it was an attempt to create credibility for his reporting. If it’s true — and we may never know — this makes the New York Jets beat and Mehta’s coverage (along with Gase’s interactions with him) more intriguing to follow.