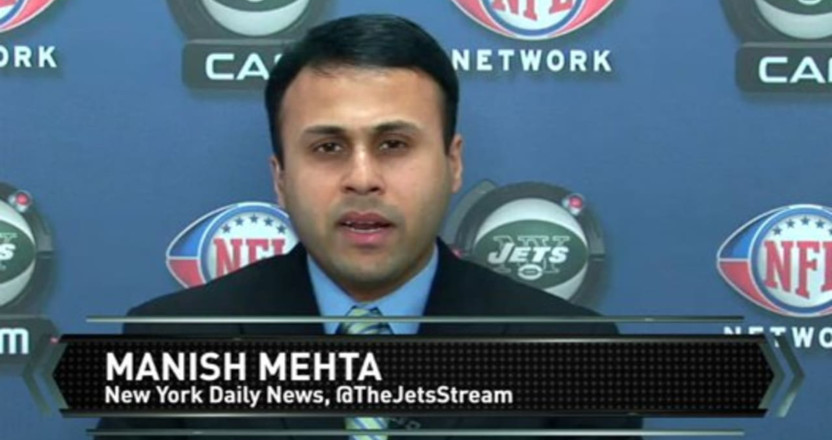 New York Daily News writer Manish Mehta has quite the history, including accusations last year that he’d created a fake Adam Gase burner account, a disputed report that the Jets were looking to Fox/NFL Network’s Peter Schrager for GM search help (several other reporters on the Jets’ beat said those conversations were only about him possibly working on preseason telecasts), a suggestion that Muhammad Wilkerson has “issues with alcohol” (which led to threatened legal action from Wilkerson’s mother), and an attempted character assassination of Rex Ryan for going to his son’s football game. This summer, WFAN’s Jerry Recco said that the Jets had taken away Mehta’s credentials, but plenty of pieces on the Jets with insight from practices kept appearing under Mehta’s byline. We now know how that happened thanks to Charles McDonald (@FourVerts on Twitter), who recently left the NYDN for For The Win and then decided to reveal how Mehta had been taking credit for his practice observations and collected quotes and also sending him specific questions to ask Jets’ personnel:

USA today/for the win. getting back into more national coverage now that i’m not being used to hold up the facade that a certain jets writer still has access to the team

it’s really fun when you commute 4 hours a day to practice and your own training camp observations don’t get attributed to you pic.twitter.com/1F1H7OPO3J

last one because im about to go enjoy my first day of funemployment, but this guy can’t just go around treating people the way he does

his bullshit has gone on for way too long and he tried the wrong mf one https://t.co/DN7WV9MEfa pic.twitter.com/tEuhGLerjc

i’m not the only person that he has treated this way, too. gotten a ton of messages from people saying he tormented them.

who knows if something comes out of it, but i pack that thang too https://t.co/bceJeYGSpk

Here’s a larger version of that photo McDonald shared of an August story of Mehta’s with no credit for quotes or observations from him. All the credit he received was for a separate piece under Mehta’s story, with no photo of him. 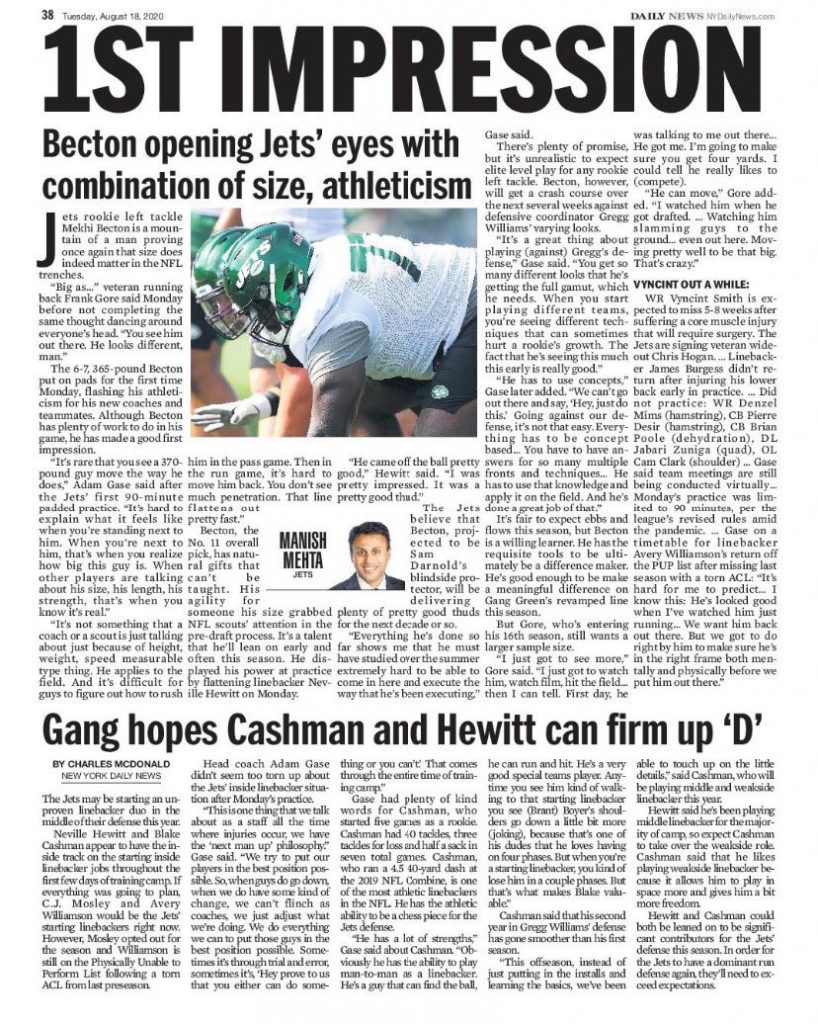 It’s pretty strange for a paper to take those kinds of measures, especially when it comes to misidentifying who is making the observations and gathering the quotes. The page McDonald tweeted there doesn’t even include a “with files from” on Mehta’s “story,” a move that’s sometimes used to indicate that some of a story’s quotes were gathered by another writer; it has no attribution at all for McDonald on Mehta’s piece. And that’s not presenting the truth to readers on where those quotes and observations came from.

This is a bad look, and it’s one rarely seen in media. The most prominent recent example of anything similar to this came from Fox forcing their digital writers to ghostwrite pieces under the bylines of on-air talent in 2017, and that led to a whole lot of backlash. It’s also interesting that the paper chose this approach, as it’s quite different from the tack they took when the Knicks banned Stefan Bondy from press conferences; Bondy and the paper complained about that, as did journalism organizations, and that eventually led to the league fining the Knicks $50,000 and the team saying they’d comply with league media policies going forward.

The paper did not push for Mehta the same way, and that raises questions about if his ban was more justified. EA Sports producer Erika Esola, a former sports editor at Florida Today and elsewhere, tweeted that multiple Jets beat writers told her the last straw here came from Mehta harassing Jets’ GM Joe Douglas’ child at a baseball game, which certainly doesn’t seem like good behavior for a reporter. And if the Jets’ ban of Mehta was actually unfair, it would have made sense for the NYDN to make that public and lobby for his reinstatement, rather than go through this charade that he still had access.

What’s also odd here is that there would seemingly be a way to resolve this without any deception. So Mehta lost his Jets credentials;  so what? It’s quite possible to watch and write about a team from a distance. And if there was still value for the NYDN in having Mehta write about the Jets even after the team banned him, it would have seemingly been easy to just have him write commentary without spreading the false perception that he was getting quotes and making training-camp observations himself. And they then could have correctly attributed the work that McDonald did. But the paper chose not to do that, instead making it look like Mehta still had access. And now they have a fair bit of egg on their face.