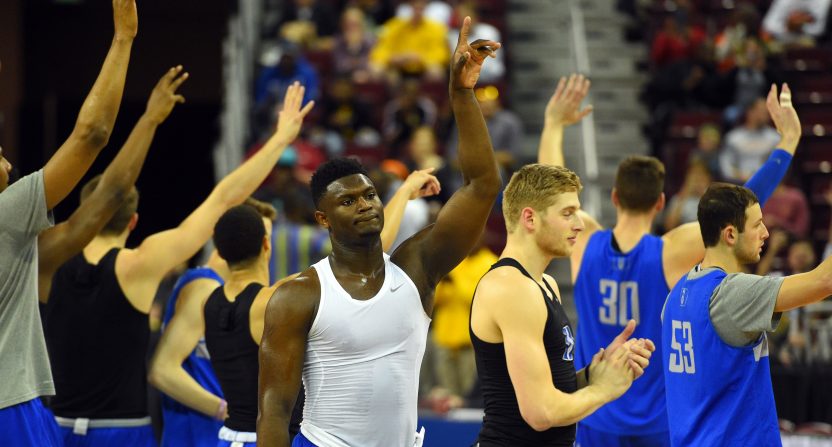 College basketball fans who want to see student-athletes get compensated fairly based on the billions they generate for their schools and the NCAA were gifted with a story about the Zion Cam on Friday. Josh Kendall at The State spoke with Marc Wolff, who is producing CBS’ coverage of the NCAA Tournament for the 35th year, and he let them know that they had hired extra people simply to follow Duke’s Zion Williamson around all day.

“Because of Zion (Williamson), we have added a camera dedicated to him the whole time he is on the floor,” said Wolff, who has risen to be the network’s coordinating producer of college basketball. “We hired a cameraman, a camera, a digital tape machine to record everything he does.”

That set off a firestorm in the world of Twitter and sports thinkpieces as people reacted to the fact that CBS was investing thousands of dollars in paid employees to cover a kid who is generating untold millions of dollars for them without actually seeing any of it for himself.

I would like to note that the camera man is getting paid more than Zion btw https://t.co/MlQEMutqsx

CBS got a whole Zion Williamson camera but players can’t get paid. pic.twitter.com/Y625cFy70n

So everyone settled in to watch Duke take on North Dakota State in the first round of the NCAA Tournament on Friday and find out exactly what Zion Cam entailed. Long, lingering shots of Williamson drinking Gatorade in the huddle? A dedicated camera angles that focus on his defensive abilities? A never-ending close-up of his face?

Turns out none of those things because that’s not what Zion Cam is for. Anyone who tuned in to the game to see it was left scratching their heads. And another who tried to find the Zion Cam feed on CBSSports.com was also left puzzled. What happened to Zion Cam?

In reality, nothing. Because it seems as though the intent of the Zion Cam got lost in translation somewhere in the outrage. There’s another quote in that initial article that speaks to the actual intention of the camera and its crew.

Williamson and the Blue Devils took the floor Thursday for a 40-minute open practice, and CBS’ new camera was rolling.

“We were recording his workout here today in the event something were to happen,” Wolff said. “We are monitoring Zion 24-7.”

And so the Zion Cam isn’t like the Coaches Film Room broadcast that ESPN did for the College Football Playoff or anything like that. It’s literally just a camera crew following Zion around all day… just in case.

Just in case what, exactly, is where it gets a little creepy. What, exactly, is CBS hoping to capture? Had Zion thrown down some crazy dunks we probably would have seen that, right? But you have to wonder if “in the event something were to happen” speaks to a darker desire. To be there just in case Zion’s shoe implodes again? To be there in case, god forbid, he injures himself?

What could be so important that they need to have a camera trained on him while he’s shooting free throws at practice? Yes, the guy’s got hype through the roof, but so far hiring an entire crew to track him all day doesn’t sound like the greatest investment, especially if this is what their whole plan consists of.

(Also, we hope they’re not actually monitoring him “24-7.” Let the guy use the toilet in peace).

Far as we can tell we haven’t seen much of that footage so far. And if we have, it probably just looked like normal pre-game and practice footage that we normally see during the NCAA Tournament. Is the plan for CBS to just have as much footage of Zion as possible for highlight reels and DVD collections (presuming Duke wins the title)?

Whatever the plan, it doesn’t seem to be what many people were expecting when they first heard about the Zion Cam. Regardless, however they monetize him, Zion should be getting a cut.