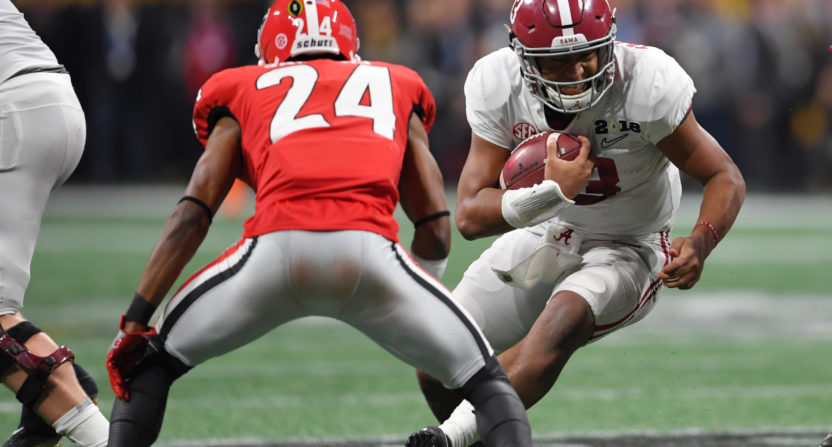 ESPN announced their bowl schedule for the 2019-2020 NCAA football season, and it does look a little different from prior years.

Thanks to the calendar, the college season will end a bit later in the year than normal; in 2018, for example, conference championship game Saturday fell on December 1st, while this year they fall on December 7th. If it weren’t for the New Year’s Day tradition that quirk wouldn’t really matter; they could just play on the weekends as usual. But with New Year’s Day on a Wednesday, things had to change around that, which means a lot of bowl games are now going to be played between the College Football Playoff semifinals on December 28th and the championship game on January 13th.

This season’s College Football Playoff Semifinals will be played on December 28, three days earlier than the originally scheduled date of New Year’s Eve. The date change to the last Saturday in December, which was announced in 2016 and began in practice last season, did not affect the date of the College Football Playoff National Championship, which remains on Monday, January 13, at 8 p.m. ET as originally scheduled.

When the Sun Bowl and the Arizona Bowl (on CBS and CBSSN, respectively) are factored in, that means 17 bowl games will be played between playoff rounds. The number of non-playoff bowls taking place between the semifinals and the championship round drew some Twitter criticism:

ESPN just released its bowl schedule for this year. There will be 15 bowl games played after the CFP semifinals. This is a bad system.

Normal brain: Bowls between the playoff and title game are bad because idk that's weird or something, no real explanation offered, ugh I don't like things pout

Enhanced brain: The Mobile bowl, long traditionally played on like 1/5, should kick off right before Army's spring game

Dan’s concerns, whatever they are, would be better directed at the calendar itself, as some pointed out:

the main reason for this is that there are only four full weekends in December, the first of which will be taken up by the conf title games. stupid pope gregory https://t.co/pYr0fjol6G

It really is tough to see what the big deal is with having so many games between the playoff rounds, or after New Year’s itself. None of those games matter more or less in mid-December than they do in early January. Nor are they going to overshadow any of the playoff games. If there is one real possible downside to the bowl calendar, it’s the number of days between the semifinals and championship game. 16 days is a long time to wait, and the January 13th championship game means it actually falls on the Monday after the NFL’s Divisional playoff round.

But 16 days between rounds does beat playing the semifinals on a midweek New Year’s Eve, which everyone hated to the point they changed the scheduling to prevent it from happening again, which is how we got the December 28th date this year.

It’s not a perfect schedule, but it’s also not really that bad, either. And no matter what happens, people are definitely going to watch these bowls, regardless of the date.