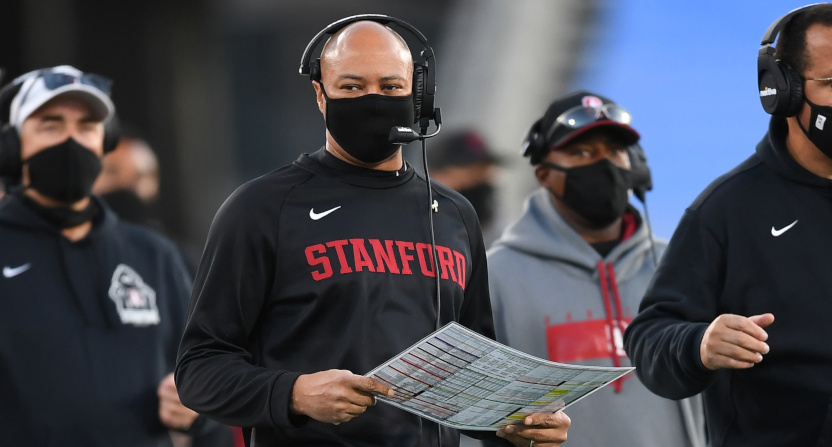 While most sports in 2021 have fully accepted that they’re ruled by what makes sense for television, given that television networks tend to provide the largest pot of money that keeps those sports going at their current level, there’s some notable backlash to that in college football. For years and years, there have been Pac-12 coaches complaining about late kickoffs, and there have been many people complaining about early kickoffs (the latest being the “bitterly disappointed” Oklahoma Sooners). The latest time-bashing here comes from Stanford coach David Shaw (seen above during a Dec. 19 game against UCLA), who’s mad about his team’s Sept. 4 non-conference neutral-site game against Kansas State (which is hosted by the Wildcats, so under the Big 12 TV package rather than the Pac-12 one) being at noon Eastern on FS1. Here are the complaints Shaw uttered to Stewart Mandel of The Athletic on that, and on the Cardinal’s Sept. 11 game at Ohio State also being set for noon Eastern (on the Fox broadcast network, in that case):

“I am pissed at Fox for our kickoff time against Kansas State,” Shaw told The Athletic. “… For Stanford in particular and Oregon to be going and playing in a different time zone, and give us an early kickoff, to me, is incredibly disrespectful. And it shows a lack of understanding of what we have to do, and the way that time difference truly affects us. It shows a lack of care for our student athletes.

“That, to me, is something that is egregious, and I don’t care who I piss off, but I think they’re wrong. A lot of our people in our conference are upset too.”

…“They (Fox) can say whatever they want to say. I don’t want to hear shit about, ‘Oh, it’s great ratings.’ I don’t care about the ratings,” said Shaw. “… This is either complete disregard, or lack of understanding how difficult it is to be a West Coast team that travels east and gets forced to play an early kickoff game.”

…“I’m not happy with Fox, and I don’t care that they’re not going to be happy with my comments,” said Shaw. “We have to start sticking up for ourselves as West Coast teams, because we’re going to get judged the same, but we’re going to be playing against guys that get to sleep in their own beds, sleep in their own time zone and wake up at 8:30 in the morning, while our guys are getting up at 6:30 in the morning and losing those two hours of sleep.”

This is interesting as at least somewhat a case of a coach biting the hand that feeds him. The TV contracts are the reason that college football can afford to pay coaches what they currently make. And as per a piece from Matt Zemek at USA Today last fall, Shaw’s estimated compensation package of $4,812,197 for 2020 was the highest in the Pac-12. Shaw would not be making anywhere near that much if the Cardinal were only relying on in-person revenues, or if there was a TV contract that allowed them to only play at the times they found acceptable (which tend to be not as good for networks).

And this is also notable given that this is a game that Stanford agreed to. Yes, it’s not under the Pac-12 broadcasting rights, it’s under the Big-12 broadcasting rights. But that’s because of how this game was set up. There was nothing in this contract that said that kickoff had to be at a time in the evening. If Stanford cared that much about having games kick off at a time perfectly suited to their players, they should have negotiated that into their contracts.

And that also applies to the Pac-12 rights. If coaches hate late-evening or early-morning kickoffs that much, their schools should negotiate that into their TV contracts, and they should be fine with the lesser value they get as a result. The Pac-12 in particular is currently most valuable as a late-evening or early-morning property; if coaches don’t like that, that’s fine, but they should be fine with the lesser pay they would get and the lesser status their schools would have from a diminished TV contract.  If you’re going to insist on only playing at times that are optimal for your players, regardless of what that means for TV (in these cases in particular, it would mean putting your games up against a lot of other competition), you should be willing to take a pay cut for insisting on providing an objectively less valuable TV product.

It’s also notable that college football teams are still complaining about the effects of time zones. Yes, time zone effects are a thing, for sure. But that’s why many teams travel multiple days in advance of their game, to try and let their players acclimate to the local time zone as much as possible. The NWSL does that (except when strange travel effects get in the way), and most other leagues do too. And time zones are rarely cited as a major problem in those leagues. And maybe that’s part of the issue here; if Stanford was willing to put up some more money and send their players out a day earlier, maybe there wouldn’t be as notable of an effect on their team’s performance.

At any rate, it’s certainly interesting to see a college coach so publicly bash a media partner. And it’s interesting to hear leading college football figures continue to complain about the very practices that get them paid. And while it may not be an actual thing any time soon, it’s at least interesting to contemplate a hypothetical TV offering of “Your team only plays at the kickoff times you approve, but you get 25 percent less in media rights as a result, and that leads to a 25 percent cut to coaches’ salaries.” The strict percentages there obviously could change based on data, but it’s obvious that playing at these particular times is advantageous for networks. Is not playing at these particular times worth enough to coaches to take less pay?

Would Shaw take a deal like that? We don’t know. But for the moment, he certainly seems content to bash a TV partner that’s played a big role in his Pac-12 leading salary. And he’s just the latest college coach to do that. And it’s interesting to see how many college coaches and athletic departments are complaining about the goose that lays their personally-enriching golden eggs.