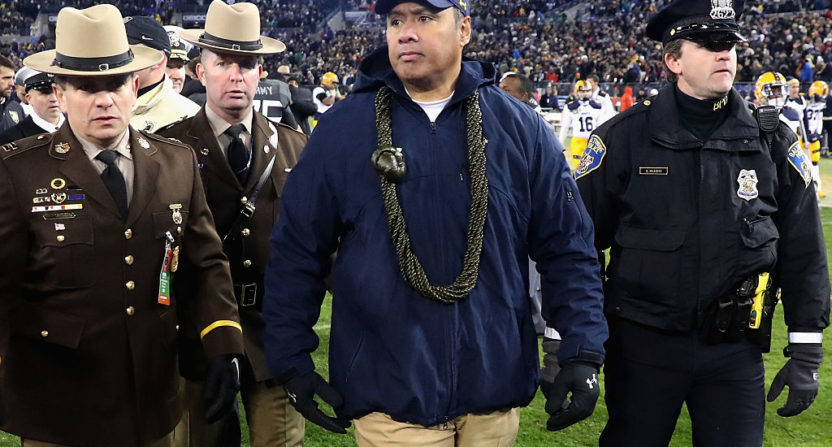 We’ve seen plenty of college football programs trying to restrict reporters’ access over the years, with LSU and Texas among the most recent. And it’s not just the big programs; past examples have happened at Idaho and McNeese State, as well as plenty of other schools. The overarching trend is towards coaches viewing the media as adversaries, and attempting to crack down further and further on what they can watch, what they can tweet, who they can interview and more.

So it’s particularly interesting to read about a head coach who’s taking the opposite tack, and that’s what makes a new Dan Steinberg interview with Navy’s Ken Niumatalolo (seen above at last December’s Army-Navy game) fascinating. Niumatalolo told Steinberg he views media exposure as a positive for his program, and he thinks his assistant coaches are more than capable of handling interviews:

“We just wanted to be transparent. And I didn’t really think much about it,” Niumatalolo said this week. “I always thought that [media members] are helping our program, too, and the exposure’s helping our program and helping our kids. So I didn’t really think anything about it; I just thought it was part of the deal. I don’t know, I guess that’s just my personality. I probably talk too much. But we didn’t have anything to hide. I just feel like, ‘Well, come in our house. You can look in our closets. We don’t have anything to hide.’ ”

There’s a lot of other interesting stuff in there, including about how Niumatalolo closes the football offices on Sundays to encourage assistants to spend time at home, how he’d operate the same way at a bigger program, and how senior associate athletic director for sports information Scott Strasemeier feels media don’t affect the team’s wins and losses and do help sell the program (plus, he sees player interviews as good preparation for those individuals’ post-graduation military careers). But the overall takeaway is that you don’t necessarily need these media restrictions in order to find success; Navy’s done quite well there, averaging nine wins a year since 2012.

Of course, those wins aren’t always against the highest competition (but they’re still really impressive, especially considering the recruiting constraints they operate under), and of course, reporters covering Navy don’t get complete access. Thursday in-season practices are closed to media and cameras aren’t allowed to film team drills. But assistant coaches are available for interviews upon request, preseason practices are fully open, many practices during the season are open, and there are no official restrictions on social media usage. That’s a big step away from what many schools are doing.

Some of that may be because Navy doesn’t have quite the armada of media covering it that other schools do. For example, they don’t have social media restrictions because Niumatalolo says he trusts their regular reporters not to reveal strategic details. That might not be the case at a larger school, especially one covered by media very interested in the Xs and Os. And Navy isn’t necessarily going to be covered regardless of their restrictions; LSU and Texas can mostly do whatever they want to media, because they know they’ll still get a ton of media coverage. But that didn’t stop some of the smaller schools from cracking down on media, and Niumatalolo certainly doesn’t have to be as open as he is. And it’s not like he’s doing this as a publicity stunt; Steinberg sought him out because he’d heard of other reporters’ positive experiences with Navy.

Perhaps even more than the specifics of Navy’s openness, it’s the approach of their head coach and their head of sports information that’s refreshing. Media members don’t have to be a school’s adversaries, and letting them do their job properly can play a big role in actually promoting a school. And it’s worth noting that coverage with access is often more favorable than coverage without access; coaches, assistants and players aren’t too likely to say negative things about their own program, so those quotes are usually pretty good for the school.

There’s also far too much paranoia about reports helping rivals. The vast majority of the time, media information doesn’t do that, and if you’re practicing specific trick plays or something that could potentially get out, that’s why you have a once-a-week closed practice. Niumatalolo’s approach certainly shows that it’s possible to be very successful in college football without cracking down on the media, and hopefully others will see that and follow suit.