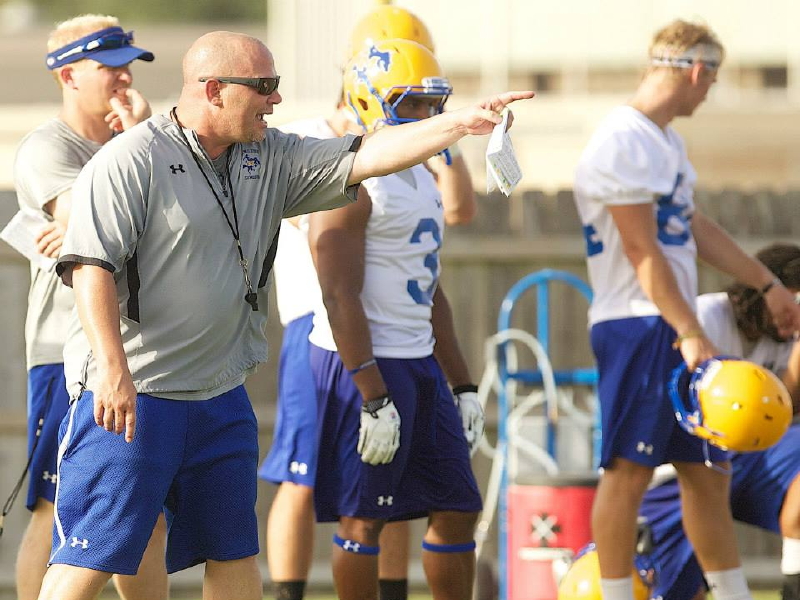 We’ve seen plenty of college football coaches try to restrict access to certain media members or outlets, but McNeese State coach Lance Guidry is approaching restrictions from the other side, saying after Saturday’s win over Incarnate Word that he would prohibit all of his players from speaking to any media going forward. As Chandler Rome of The Lake Charles American Press tweeted Monday, Guidry has since relented to allow his captains to address the media this week, but is still blocking interviews with any other players. The comments Guidry made in Rome’s initial story about the ban from Saturday are highly disturbing and patronizing, and they illustrate the delusions of grandeur and sense of unilateral power many college coaches have, even those coaching a 2-2 FCS team like McNeese State.

A quick prayer ended and Lance Guidry made a beeline to the sideline following McNeese’s 42-35 win against Incarnate Word — a game the Cowboys led 42-14 in the middle of the third quarter.

“No players,” he said, waving his hands as if to signal for an incomplete pass. “No players are talking to the media.”

That’ll, apparently, be the new norm.

Visibly exacerbated following a game where his team committed 12 penalties for 116 yards and nearly blew a 28-point, second-half lead, Guidry forbade his players to speak to the two reporters gathered for interviews.

Customarily, McNeese makes players available to reporters following practice on Tuesday and Thursday. All players are requested 24 hours prior and then approved. Some requests go unfulfilled.

“Until they start acting like adults and the players we think they can be, and you know what, no one needs to be talking to the media anyway right now,” Guidry said. “They’re not going to say the right things I want them to say anyway. So I’m going to be their voice and that’s the way we’re going to handle it from here on out.”

“They’re not going to say the right things I want them to say anyway” is perhaps the worst defense ever given for trying to muzzle players, and saying “I’m going to be their voice” illustrates just how problematic this is. Here’s more of what Guidry said Saturday, from Rome’s follow-up story published Monday:

“Talking to the media is a privilege — it’s not a right. I give them that privilege and I’m taking it away. I’m going to handle the media. I’m the guy that should be the spokesperson. Because, bottom line, it falls on me. And I don’t want them saying the wrong things.”

A coach is not the voice of players, and they should be able to express themselves. It’s also relatively unprecedented to see this. Yes, there have been numerous cases of coaches preventing freshmen from speaking to the media, as Oklahoma’s Bob Stoops did recently, and those are problematic too, but preventing the whole team from doing so is on another level.

Trying to maintain this level of control over players feels highly paranoid, and a coach’s time could surely be better spent pondering on-field subjects rather than trying to limit what his players say. Preventing players from talking surely won’t help Guidry’s popularity in the locker room, either. At least Guidry partially recanted to allow captains to speak to media this week. Still, that kind of ban on other players remains troubling.

This also meant media were unable to cover some good, logical stories that would have promoted McNeese State’s program. One clear example would be asking new LSU interim coach Ed Orgeron’s sons (Cody and Parker are both freshmen players for the Cowboys) about their dad’s promotion:

A request to speak to his other two sons, #McNeese freshmen football players Parker and Cody, was declined this morning. https://t.co/N5fuH3pLmE

Rome still got a good story about Orgeron from Guidry, but that story would be far better if the sons were allowed to add their voices to it. Prohibiting them from talking for a piece like that doesn’t really make any sense, either; what exactly are they going to say that Guidry’s so worried about? (Oddly enough, it sounds like Orgeron plans to give media enhanced access at LSU.)

Of course, Guidry is still learning the ropes. This is his first full-time gig as a head coach (he was the interim head coach at Miami of Ohio for a game in 2010, and held that same role for a game at Western Kentucky in 2012) and his first season in the job. Perhaps he’ll realize as time goes on muzzling players isn’t helping his cause. Still, it would be better if McNeese State could get back to making headlines for producing players like Leonard Smith and Kerry Joseph rather than making headlines for their media bans.