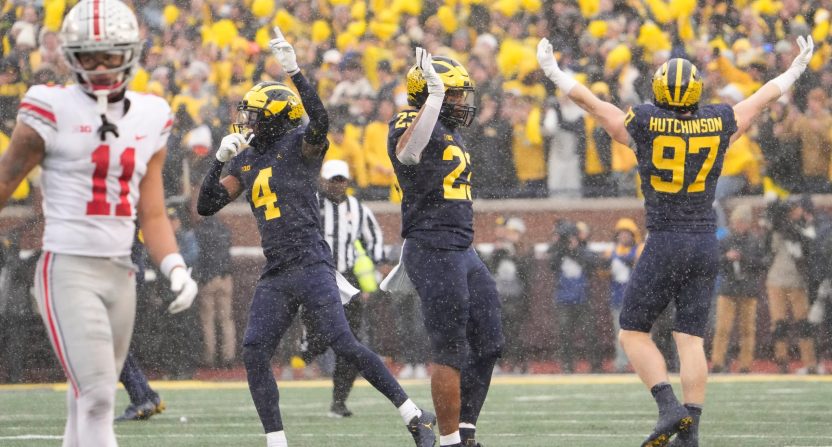 For a football series steeped in hype and tradition, this year’s Big Ten showdown between the Michigan Wolverines and Ohio State Buckeyes seemed to feel a little different. Maybe, just maybe, this was the year that Jim Harbaugh got the better of the Buckeyes. And indeed, Michigan’s 42-27 victory made good on the storyline that it had been building to over the last decade.

No wonder the game ended up being this year’s most-watched college football game, drawing nearly 16 million viewers to Fox for the late-season rivalry game. While the ranking isn’t surprising given how it usually finds itself up here, the sheer number of people watching was quite the bump from recent games.

It is also worth noting that the game it usurped to top that list was Michigan State’s win over Michigan earlier in the season, which drew 9.289 million viewers, also on Fox.

Since then, the four-overtime Iron Bowl snuck in between both of them (10.369 million viewers), but it has to be considered notable that Michigan was the common denominator in two of the most-watched college football games of the 2021 season.

Whether temporary or not, all of a sudden the Big Ten is not dependant on Ohio State and solely Ohio State to draw ratings. And with the way Penn State, Wisconsin, Iowa, and Michigan State worked their ways through the national spotlight this season, there’s a case to be made that their “product” is as valuable as its been in a while, which is saying something because it was pretty valuable the last time the conference scored a TV rights deal.

That was 2017 and the league agreed to a new TV rights deal that split football inventory between Fox and ESPN. Fox was given priority picks in most weeks, which is why they end up getting games like Michigan-Ohio State and the Big Ten Championship Game. That’s also why Fox pays $240 million annually while ESPN pays $190 million. CBS is also included in the overall TV deal to broadcast select Big Ten basketball games, for which they pay $10 million per year.

Fox has used the deal to build out Big Noon Kickoff, which has become a cornerstone of their college football coverage, sometimes surpassing ESPN’s College GameDay in the ratings. And all due respect to Oklahoma, it’s led to some very impressive numbers for the network and the teams that play in the noon window (see above).

These deals run through the 2022-23 season and it’s almost time to start negotiating for the next round. On a recent episode of their sports media and business podcast, Andrew Marchand and John Ourand discussed how the Big Ten could be lined up for a huge payday.

“Look at the numbers that Ohio State-Michigan did for Fox,” said Ourand. “Fox is crowing about its big new strategy. The noon window on Saturday is the most-viewed window of the regular college football season, and that’s Fox’s strategy of putting the biggest games there. It just so happens those biggest games are all in the Big Ten. The Big Ten is coming into this media rights negotiation with such a position of strength. They have big brands. They have big ratings. They still have another two years, I believe, that’s left on [their current deal] but I expect them to start negotiations coming this year.

Expect to start hearing more about Big Ten TV negotiation rights by the time next football season rolls around. In the meantime, expect Fox to continue chirping about its success and their rivals preparing their plans to compete with the platform they’ve created for the conference in recent years.