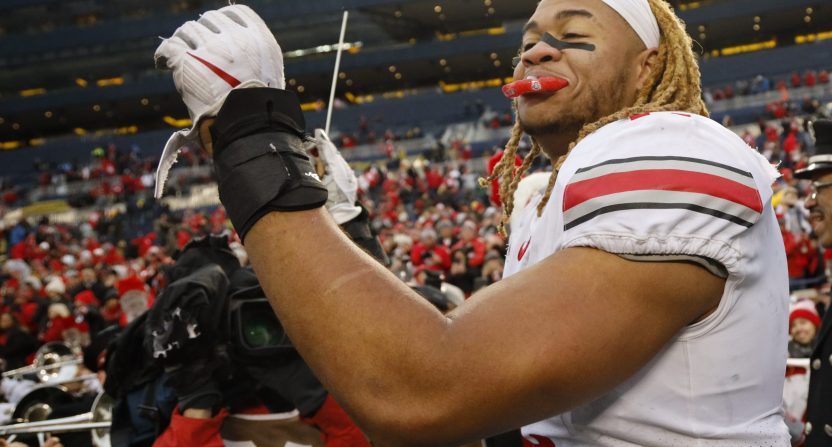 Last weekend, Fox gleefully announced that the Ohio State-Penn State game had been watched by a little over eight million viewers and drew a 6.3 rating overall, making it their highest-rated CFB broadcast of the season, second only to LSU – Alabama.

It only took a week for Fox to shatter those numbers thanks to an even bigger Ohio State football game.

Fox’s coverage of No. 1 Ohio State’s 56-27 win over Michigan was obviously the highest-rated TV event of the day, but more importantly, it surpassed OSU-PSU to become their top-rated college football game on the season. The game drew a 7.5 overnight metered market rating, which is surpassed in the 2019 season only by LSU-Alabama on CBS (9.7).

FOX College Football’s coverage of top-ranked Ohio State’s win over Michigan checks in as the highest-rated event of the day, the network’s top-rated college football game this season and pulls in BIG NOON KICKOFF’s best rating ever ? pic.twitter.com/rxEbm6NBzm

It’s no surprise that this Big Ten rivalry game is TV ratings gold for Fox. The 2017 contest garnered, at the time, the best overnight rating ever for a Fox regular-season college football telecast (6.7). The 2018 edition pulled in a 7.5 rating and 13,200,000 TV viewers on average (up 26 percent). This year’s game stayed flat on that number, but it’s still extremely impressive. It cements the notion that this is a cornerstone of Fox’s college football broadcasting schedule, especially as the elusive first win for Jim Harbaugh dangles overhead.

The game also helped Fox’s Big Noon Kickoff garner it’s best-ever ratings share (1.6) between the 11:00 a.m. and 12:00 p.m. hour. That’s a huge win for Fox as they attempt to close the gap between them and ESPN’s much more established GameDay. Last week, they got fairly close to beating them in the ratings for the first time ever. This week, according to Andrew Marchand, they finally did it.

Fox’s Big Noon Kickoff beat ESPN’s GameDay on Saturday with a 1.6 rating to 1.54 from 11-noon, according to Fox.

Given that GameDay was in Minnesota but didn’t directly lead into their big game of the day (Minny-Wisconsin), that’s probably had an impact. Plus, as Marchand notes, we’ll have to wait and see if the numbers fluctuate when the complete ratings come out.

Regardless, the way Fox built up to this one throughout the season by stacking their Big Noon schedule with Ohio State and Michigan games and cornering the market on those fanbases is to be commended. Making trips to Columbus and Ann Arbor in successive weeks certainly didn’t hurt either.

Expect this game to remain their regular-season crown jewel for many years to come (especially as a return on their hefty investment in Big Ten football).