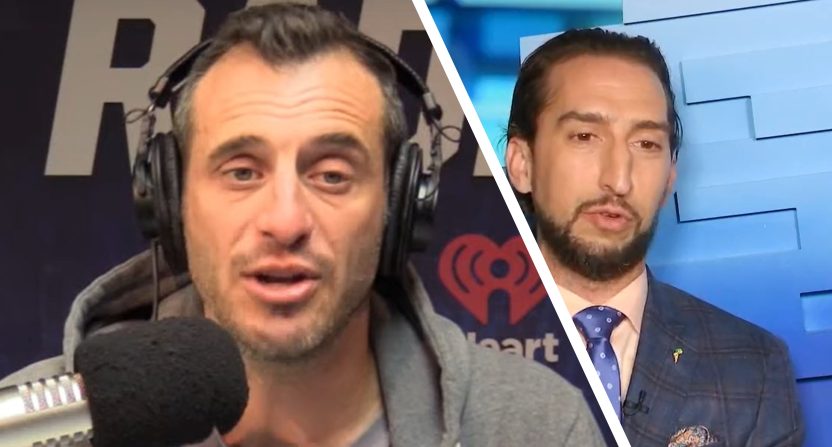 That sports world has been consumed by Nick Saban recently airing his grievances over the landscape of college athletics being forever altered by its name, image and likeness policy. At 70 years old, Saban seems worried about his ability to keep dominating the recruiting process, while other schools find ways of using NIL to compensate athletes.

Saban doesn’t like it, but many fans and analysts, including Fox Sports host Nick Wright, favor the rule for its ability to benefit student athletes. Wright went on a two-minute rant during his FS1 morning show First Things First, noting that for decades, college sports took advantage of its athletes, particularly Black athletes from low-income communities.

The subtext to all of the controversy surrounding NIL is that for decades a majority white administrative state has been stealing money from a majority black player pool & the moment that starts to change, the power brokers freak out. pic.twitter.com/vmyG75slzT

“We are a country that hates regulation and loves free markets,” Wright said. “And it is not lost on me, that the only place the general sporting public wants extra regulations and extra rules is keeping their thumb on men’s college football and basketball players.”

Men’s football and basketball programs generate billions of dollars through TV partnerships, directly contributing to the massive salaries of head coaches and school administration staff. They also fund less popular sports such as tennis, golf and fencing. Yet for decades, a nationally recognized student athlete on scholarship for the football team would get the same form of compensation as someone on the fencing team.

Wright’s rant caught the attention of his colleague and Fox Sports Radio host Doug Gottlieb, who blasted the opinion as “fake racism,” prompting a heated back and forth.

This is far and away the most ridiculous fake racism take out there. For year colleges and universities have provided educational opportunities for student athletes that have given more scholarships than any program outside of the GI Bill. https://t.co/HE6R3lMnJ2

Fake racism is almost as bad as real racism. “White administration” is comical. You know most educators don’t make much, administrators as well. Just a bad fake racism take. Do better.

Embarrassing take by you. Maybe you should point out the education imbalance in society and how scholarships are meant to even the playing field? Nah, that is too accurate. You don’t value educational opportunities,not realizing the value in them changes lives. Sad bro

In sports.. 1- racism decides NFL QB decisions/treatment is probably the worst, but it did previously exist 40 years ago, so at least there is historical accuracies even if they no longer exist. 2- white people are “stole” from black athletes because they were on scholarship

“This is far and away the most ridiculous fake racism take out there,” Gottlieb wrote on Twitter. “[Four] year colleges and universities have provided educational opportunities for student athletes that have given more scholarships than any program outside of the GI Bill.”

The irony of citing the GI Bill in a tweet that attempts to deny racism is impossible to overlook. The GI Bill is widely considered to be one of the country’s worst historical racial injustices for the amount of Black veterans who were denied its benefits.

GI Bill gaffe aside, nobody is saying there isn’t at least some value in getting a college education. But amateur athletes are the fuel for building college sports into a multi-billion-dollar industry, yet prior to NIL, NCAA rules prevented them from helping their own families escape poverty.

It’s nonsensical to argue student athletes get more out of playing college sports than the schools get from not having to pay their star athletes. Sure, they were eligible to receive a $250,000 education. But that just prompts the question of why should an education cost $250,000?