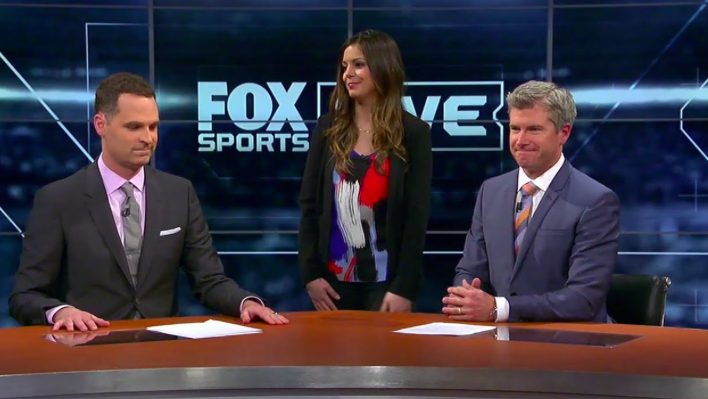 A little healthy competition can be a good thing.  Healthy being the key word.  Whether or not that’s currently happening at FS1 is difficult to determine after seeing the series of events involving Emmy winner Katie Nolan and Fox Sports Live co-host Dan O’Toole.

Nolan was at the center of a profile piece with the Sporting News and commented that she wanted to move her Garbage Time show from one night a week to every weeknight.  And she would ideally like to see it move from after midnight to 11 PM ET or 11:30 PM ET.

“I think 11, 11:30 (p.m. ET) is my ideal time. Like a late-night show — but on a sports network. I think there’s a real opportunity for us to be the network that has that. And I would love to do it,” Nolan said during an interview at her production studio in Manhattan. “I’d love to be four or five nights a week, ideally. And we’re working towards that.”

Here’s where things get a little sticky… FS1 already transformed Fox Sports Live from a highlight show into more of a late night comedy show that airs at 11 PM ET most weeknights.  FS Live’s Dan O’Toole tweeted out the article and sarcastically called Nolan a “team player” who was out to “take our time slot.”

O’Toole also took a not so subtle dig at Garbage Time’s ratings compared to FS Live in a reply to a tweeter. (Last week FS Live averaged 57,000 viewers while Garbage Time scored 49,000.)

For her part, Nolan said that any thought she was out to hipcheck O’Toole and Jay Onrait out of the FS1 nightly lineup was simply a misunderstanding:

@SammonSez (that's a jab at sportscenter, espn's counter programming to our late night line up)

@SammonSez if its misunderstood that way, that's because of how it was framed by the author of the article. Very clear that's not my intent

This isn’t the first time that O’Toole has been outspoken or critical of his network or colleagues on Twitter.  During Super Bowl week he ripped into the network for laying off the Fox Sports Live crew and the lack of resources for the show compared to Fox’s digital operation.  At that time, the program was put on hiatus and brought back in its completely new (and reduced) format.

If there is any real tension (let’s keep in mind Onrait & O’Toole had a tongue-and-cheek rivalry with Mike Francesa when he was at Fox), it’s unfortunate because Nolan and O’Toole/Onrait are pretty much the only fresh faces left of the original FS1 that sought to be a true alternative to ESPN.  Now FS1 is just taking every horrible and annoying thing about ESPN and amplifying it.  In an ideal world, there’s no reason why FS1 primetime can’t be big enough for both shows, with Onrait/O’Toole on at 11 PM ET and Nolan on at 11:30 PM ET.

That’s of course until every hour of FS1 programming is taken over by Skip Bayless, Jason Whitlock, Colin Cowherd, and Clay Travis.  My Lord that’s depressing to write.

At least FS1’s old and new eras can apparently agree on delicious cupcakes though, so that’s one positive?  I guess?

This picture was FAR too interesting to not include in some fashion.