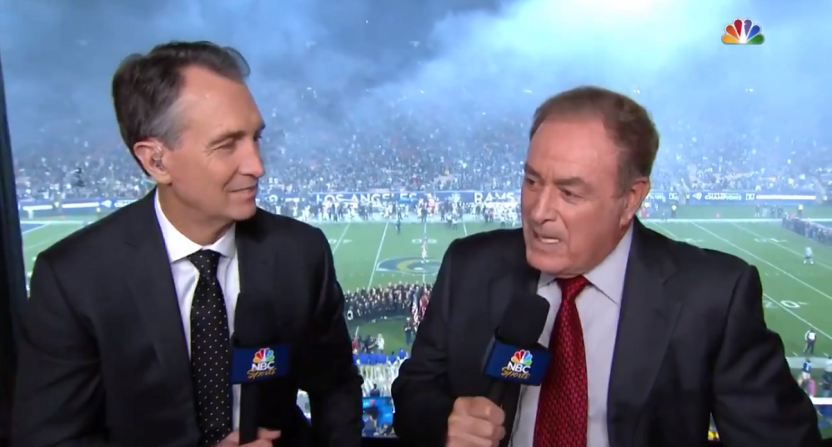 With NBC’s Sunday Night Football set to return on Thursday night (long story) for the 2020 regular season opener, the network offered up some of their planned changes necessary to produce games while adhering to social distancing guidelines.

Unfortunately, one of the smaller charms of the SNF broadcast will have to go: the Collinsworth Slide, a Twitter favorite moment where Collinsworth slides in from out of frame on his rolling office chair. (Who could forget the uproar that occurred when he slid in from the left?) Unfortunately it had to go, as Al Michaels noted to reporters for a very obvious reason: social distancing.

The so-called “Collinsworth Slide” has become a popular meme on social media. But that was before the coronavirus.

Michaels said the slide is out, at least for a while, due to social distancing guidelines.

“I was watching a baseball game the other night and the guy was trying to steal second and he goes to the ground and comes up six feet short,” Michaels said. “So maybe that will be our slide this year.”

They did miss a real opportunity to have Cris try to slide in only to slam into a Plexiglas barrier. At least the door is open for a possible return; we’ve lost it once before, after all, only to get it back. As far as other changes go, they’ll be similar to ones other networks have had to implement (or choose not to) in order to make the best of a bad situation. Artificial crowd noise is in, for example, while virtual fans are not, though as the Chiefs plan on having some fans in attendance for the opener we might not get a glimpse at that particular function on Thursday night.

Meanwhile, Michelle Tafoya won’t be on the field itself, but she sounds confident that won’t make her a sidelined reporter:

NBC sideline reporter Michele Tayofa confirmed a previous Front Office Sports story that the NFL won’t allow sideline reporters on the field with players and coaches this season due to the coronavirus. Instead, Tafoya will be stationed in a “moat” near the first round of seats. She will be so far away from her former perch, she’ll use binoculars for the first time. Still, Tafoya is “eager” to see how it works out.

“Different for sure, but you know what? Like these guys have said, this is going to be a memorable season for a lot of reasons, and so just looking forward to the challenge,” she said.

All of that is in addition to the news that Mike Tirico will be taking over some weeks from Al Michaels as the first part of a succession plan, which we covered yesterday.

On Thursday’s conference call with media prior to the start of the 2020 NFL season, Sunday Night Football producer Fred Gaudelli noted that Michaels would be taking “bye weeks” during the 2020 season, with Tirico taking over in the Sunday Night Football booth during those weeks. The first week off for Michaels comes in Week 3 of the season, with Tirico calling the Packers-Saints matchup.

In sum, the broadcasts are going to be a lot different, but clearly SNF is the latest program to try and make games and events feel as normal as possible, and they have the added benefit of other sports having gone first. In the end, of course, viewers are just going to be happy the NFL is back, whether or not Collinsworth can roll into frame as per usual.
[Front Office Sports]