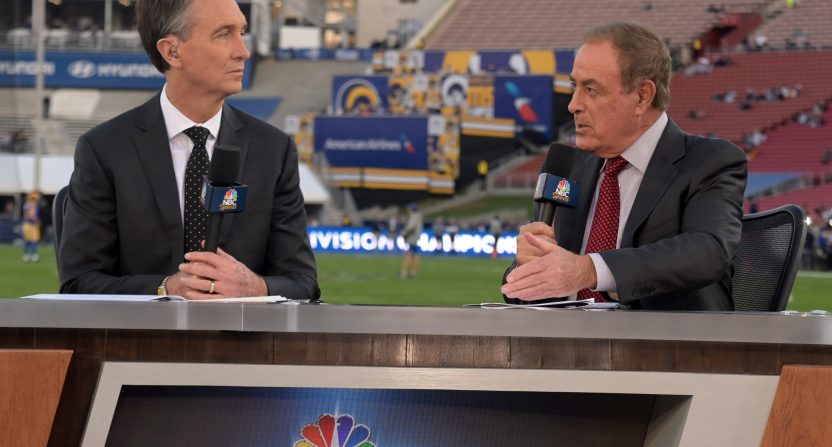 Mike Tirico joined NBC back in 2016, and has unofficially been considered the heir apparent to Al Michaels at the network since then. While the torch hasn’t been passed yet, and Tirico’s role at the network hasn’t expanded to Sunday Night Football, NBC may be taking steps in that direction this fall.

On Thursday’s conference call with media prior to the start of the 2020 NFL season, Sunday Night Football producer Fred Gaudelli noted that Michaels would be taking “bye weeks” during the 2020 season, with Tirico taking over in the Sunday Night Football booth during those weeks. The first week off for Michaels comes in Week 3 of the season, with Tirico calling the Packers-Saints matchup.

Al Michaels will have some bye weeks this year on Sunday Night Football to minimize travel. Mike Tirico will call the Week 3 game in New Orleans. Then Tirico's schedule TBD.

It makes some sense for Michaels to take a week off this early in the season. While he’ll have two games in four days to start the year, Week 1’s SNF game will be in Los Angeles, where Michaels lives. That Week 3 Packers-Saints matchup is the one NBC game (aside from the Texans-Chiefs opener next Thursday) over the first seven weeks of the season that won’t take place in the Pacific Time Zone, and it would be quite easy to minimize Michaels’ travel to the west coast (and Las Vegas) through Week 7.

East coast games start popping up on the schedule in Week 8, and while Michaels obviously won’t take all of them off, it wouldn’t surprise me if his next off day comes in Week 8, 9, or 10. Tirico’s ascension to the network’s top play by play role during those off weeks, and his appointment to the broadcast of NBC’s second Wild Card game this season (thanks to the expanded playoff format), shows the network still thinks highly of him and will likely turn to him when Michaels eventually retires – assuming Tirico sticks with NBC until then.