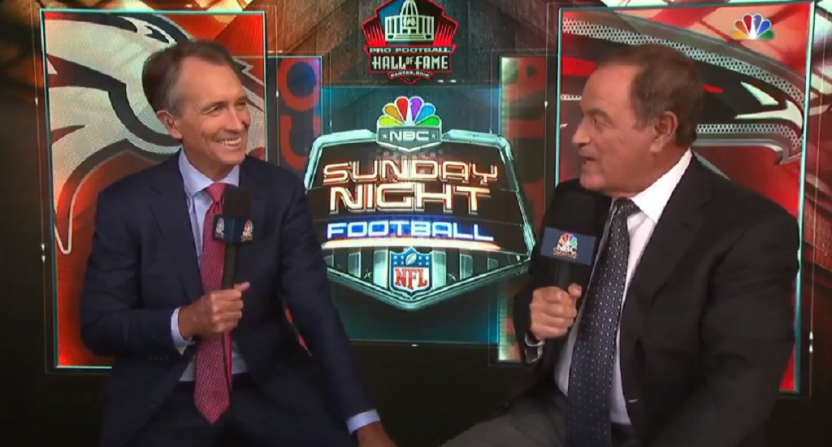 Good luck trying to figure out why certain things go viral and certain things don’t in the Year of Our Lord 2019. For some unknown reason – maybe it was the wobble in the earth’s rotation around the sun or something – Sunday Night Football analyst Cris Collinsworth became a viral sensation last season. It wasn’t because of any prescient bit of analysis, nor for a hilarious blooper of any kind, and it wasn’t because he ran onto the field, stole the ball from Tom Brady, and started doing the backpack kid dance.

No, Collinsworth went viral for… sliding into the television frame next to Al Michaels during their pregame introduction.

So with the 2019 NFL preseason kicking off tonight, football fans everywhere were waiting for that moment that would christen the beginning of another season and for Collinsworth to welcome football back into our lives with his patented slide. Seriously, look at these tweets.

NFL FOOTBALL IS BACK THAT MEANS THE RETURN OF THE CRIS COLLINSWORTH SLIDE LETS GOOO pic.twitter.com/xcB9QOAHvD

And then, like the existence of the NFL preseason itself, excitement turned to a malaise of nothingness. Instead of treating America to his trademark greeting, Collinsworth was just… kinda there in the broadcast booth next to Al Michaels.

An 11th season for the duo of @CollinsworthPFF and Al Michaels! pic.twitter.com/LDKYT5rxEG

were we robbed of the collinsworth slide

What a disappointment. Is The Slide only a regular season thing? Does Collinsworth need to get more reps in training camp? Or were NFL fans just having too much fun with this and Roger Goodell had to step in and shut it down?