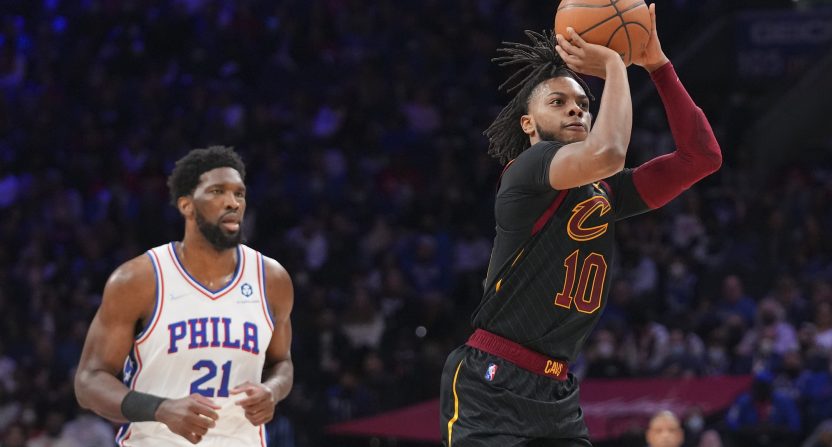 The NBA’s local ratings are up this year, per the Sports Business Journal’s traditional post All-Star accumulation of the league.

Overall this season, total viewership on the RSNs is up 10% overall to 1.028 million viewers, though up a less impressive 5% when compared to the same amount of games. Last year’s total viewership of 931,530 viewers continued a slide since the 2015-16 season, when the NBA’s local viewership was a reported 1.411 million.

The five highest-rated local markets are Golden State (7.63), Cleveland (3.74), Philadelphia (2.72), Milwaukee (2.61), and Chicago (2.52). Cavs viewership on Bally Sports Great Lakes is up 65% from a year ago, while Bulls games on NBC Sports Chicago are up 83%. Phoenix, not a traditionally great market for the NBA, is up 55% to a 1.72 local rating on Bally Sports Arizona. That’s in the top half of the league’s viewership (though data for the Grizzlies, Jazz, and Raptors wasn’t available).

I also want to shine a light on the Knicks. A strong performance in the New York market is key when discussing local viewership in American sports leagues (SEE: the Giants and Jets being awful and local NFL ratings in New York falling into the gutter), and while the Knicks are currently outside the playoff picture in the Eastern Conference, they’ve shown signs of life over the last two years. The team’s games on MSG this year are up 21% to a 1.43 local rating, and have increased 74% over the last two seasons. Getting more eyeballs in the New York market is key for the league, and if the Knicks turn themselves into contenders, it can only help the NBA on a local level.

However, it’s not all about contention. The Denver Nuggets are currently sixth in the Western Conference, and have won a playoff series in each of the last three seasons. Their local rating of 0.19 on Altitude is not just the lowest in the league, it’s tracking as the NBA’s lowest local rating in a decade and a half. This is because Altitude has been involved in carriage disputes for years – back in 2019, it was dropped by DirecTV, Dish, and Comcast, though it did manage to re-add DirecTV after a month. Infamously, Nuggets fans without Altitude were blacked out of playoff games on NBA TV last spring because of the carriage dispute.

RSNs have been on the chopping block for streaming services in recent years, with Hulu, Sling, and YouTube TV all dumping the Bally Sports RSNs, while Sling also dropped the NBC Sports RSNs. Cords are being cut by subscribers, who are replacing cable or satellite packages with streaming services that don’t carry those RSNs (in many markets), shrinking the audiences for all content on those RSNs.

The NBA should feel pleased with the overall increase.