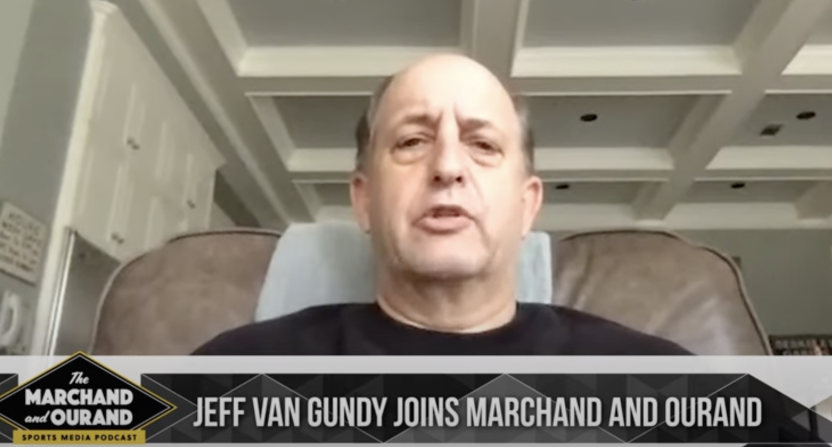 Jeff Van Gundy carved out a solid career as an NBA coach, spending 6+ years with the New York Knicks and four years with the Houston Rockets, amassing a 430-318 record. But after his stint with the Rockets ended in 2007, Van Gundy moved over into the broadcasting space, first as a guest analyst for ESPN and eventually as a full-time analyst.

These days, most NBA audiences know him more for his analysis alongside Mike Breen and Mark Jackson during NBA games on ESPN than they do for his coaching career (and will continue to do so now that his contract was recently extended, even if his name keeps popping up in coaching searches every so often).

However, before his time with ESPN, Van Gundy had a brief broadcasting stint with TNT where he worked alongside play-by-play legend Marv Albert and Mike Fratello. You would have assumed that Albert and Van Gundy had a strong connection beforehand from their days working with the Knicks. However, that’s not the case.

Van Gundy was a guest on Wednesday’s episode of The Marchand and Ourand Sports Media Podcast where he discussed his media career. Specifically, he talked about how, despite the fact that he and Albert didn’t exactly get along when Van Gundy coached the Knicks, the appreciation for one another helped him get on the broadcasting path he’s on today.

While discussing how he got started in his current role with ESPN, Van Gundy reached back to the time he worked alongside Albert to say that, beforehand, two had a relationship best described as “contentious.”

“I did [NBA broadcasting] once between when I ended with the Knicks and started with the Rockets, I went on TNT for a year and Marv Albert really pushed for that,” said Van Gundy. “And so I worked with he and Mike Fratello. The crazy thing, even though Marv did our games [with the Knicks], it wasn’t like we spoke often. He was one of the old-school guys who wanted to keep a healthy distance between team and broadcaster so that he could remain objective. I didn’t really appreciate it when I was the Knicks coach because I wanted more of a homer. And when we did [speak], it was a little contentious. And then to find out that he actually pushed for me when we really didn’t have any great relationship or anything, it really meant a lot to me. And I learned so much with him and Mike Fratello.

So when I went to the Rockets and I was done there, I had a little experience but I didn’t have any designs on ‘I’m gonna do this because I know I can be good at it.’ I sorta was in the way at TNT in that three-man booth but I learned a lot.”

As far as what made things so contentious when he coached the Knicks, Van Gundy says he thought Albert was biased against the Knicks, though he admits now that he was perceiving that through the eyes of a coach.

“It always centered around [Patrick] Ewing,” said Van Gundy. “I didn’t think he was particularly fair to Ewing.

“The thing I didn’t understand is, and now I do, is that you just have to say what you think in those jobs, and you can’t be worried about how it’s gonna be received. You have to try to be fair and direct and that’s what he was as a Knicks broadcaster. And I thought there was an anti-Knicks bias at times, and an anti-Ewing bias, and a pro-Jordan, pro-Bulls bias.

“But that was me as a coach. Me as a broadcaster now understand that, hey, Marv was just doing his job. And whether you agree with someone or disagree with them doesn’t matter. It’s the broadcaster’s job to say what he thinks. And to be honest and fair.”

As far as any advice that Van Gundy would give to other broadcasters covering sports, he thinks it’s always a good idea to try walking a mile in the other person’s shoes so you have a good idea of what it’s like to be them.