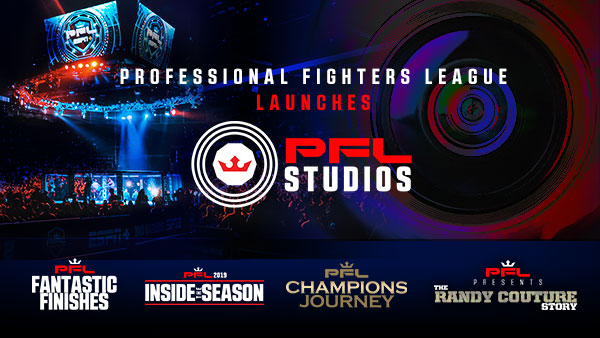 While plenty of sports leagues are still trying to figure out if and how to come back amidst COVID-19 restrictions, the Professional Fighters League is taking a different approach. The PFL announced in late April that they were shutting down their 2020 season entirely and working on plans to resume in 2021, but also offering stipends to their fighters. And they’ve also pivoted to different forms of original content, launching the new PFL Studios (headed by George Greenberg, who PFL hired back in 2017; he previously spent 23 years at Fox Sports and Fox Broadcasting, and has won 16 Emmys) to lead that effort.

PFL Studios’  various new long-form offerings for 2020 (all across a variety of ESPN linear and digital platforms) include Fantastic Finishes (seven episodes reliving memorable knockouts and slick submissions across all six PFL weight classes), Inside The Season (a 10-episode inside-access documentary on the 2019 PFL season), A Champion’s Journey (an eight-part series looking at different PFL champions’ path to titles) and The Randy Couture Story (a documentary covering Couture’s career across wrestling and MMA), with the former two out this month and the latter two set for a September release. They also have short-form digital offerings, including Inside The Knockout and Run it Back, featuring interviews with PFL fighters about past knockouts and big fights.

PFL co-founder and chairman Donn Davis recently spoke to AA about their move to reschedule the 2020 season to 2021 (a sharp contrast to the attempts to resume we’re seeing from the likes of the UFC and Top Rank) and their focus on increasing their original content during this time off. Davis said the key reason for the rescheduling was the PFL’s unique-in-combat sports structure of a regular season, playoffs, and a championship (meaning that it’s harder for them to rearrange cards if a fighter tests positive):

“The PFL has rescheduled its 2020 season for the start of 2021. We think this gives our fans, fighters, and media partners certainty. …We think for the PFL, we need to have a regular season, a playoff, and a championship. And the integrity of that championship matters to our fans and fighters. And this way, we get that clarity, we keep the integrity of the season, and we make sure it’s safe for all the fighters and the event personnel.”

While many other leagues are trying to resume in any way they can, Davis said the PFL is committed to only doing so when it seems safe.

He said he thinks some of what helps them with this approach is that they’re not just marketing to U.S. fans.

“We have a global base and a unique global product.”

But the PFL is facing financial challenges of its own thanks to losing their planned 2020 events, and Davis said that has led to some in-house layoffs and paycuts.

“We’ve had to cut personnel, and those remaining have taken 20 percent paycuts.”

Davis is excited about the new content they’re planning to put out, though.

“It will be almost 40 hours of original content. A lot of sports leagues and a lot of media outlets are just replaying old live content. We’re looking forward to putting out new original content, on ESPN2, ESPN+ and the PFL digital app.”

He said A Champion’s Journey in particular should be interesting content for MMA fans.

“We take championship fights, and diagram them through the eyes of our champion, for all six of our champions. Not only how they won, but their training, their feelings about that fight.”

Postponing all live fights for a year and boosting original content in the meantime is an unusual move for a league, but Davis said it’s one that fits with the PFL’s entrepreneurial background.

“We have had to be very entrepreneurial and I think very strategic, and we’ll continue with that.”

And while they may not have any live fights this year, he’s betting that new content will fill the gap.

“Throughout this year, there will be plenty of new content for the MMA fan and the PFL fan.”