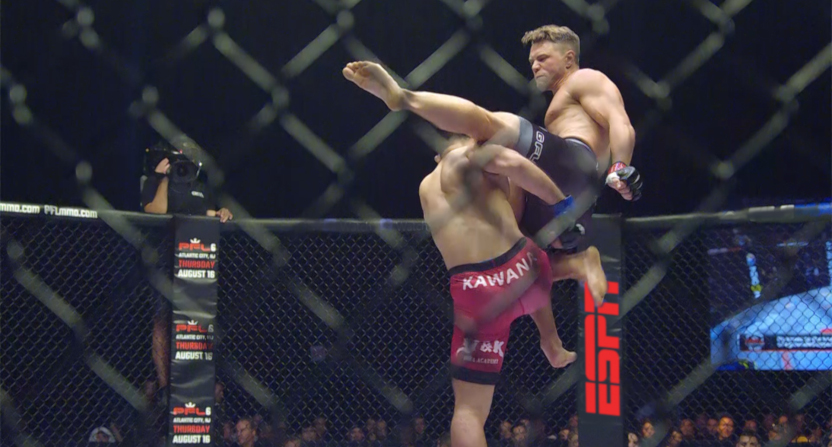 The Professional Fighters League MMA organization has an interesting concept; rather than relying on rankings or promoters, they focus on a win-and-advance model for their fighters. The organization has a big event from Madison Square Garden on New Year’s Eve on ESPN2 (beginning at 7 p.m. Eastern), with six title bouts with a million dollars on the line for each victor. PFL co-founder and chairman Donn Davis recently spoke to AA about that event, and about where he sees his organization headed in the future. First, he said that the key with the PFL’s formation was a globally underserved audience of MMA fans.

” I founded the league and I created it the day that the UFC sold for four billion dollars (in 2016). As an entrepreneur and venture capitalist, I look for new market opportunities where things are underserved and innovations can offer a better way. In MMA, there’s 300 million fans around the world; UFC is offering only 30 or 40 events a year for those 300 million fans. By contrast, there’s 1,500 basketball games a year. This is a highly underserved audience. And also, there’s only one product that’s ever been offered, and that’s the kind of one-off event model, where promoters choose who gets to fight and promoters say who’s number-one and number-three-ranked in the world just because they decided it.”

“And I said ‘What if we could create the true sport format, like what exists in the NBA or the NFL? Win and advance, meritocracy, transparency. That’s what sport is.’ And so that day, I said we will give these 300 million MMA fans another choice, and that choice is what the Professional Fighters League offers. Regular season, playoffs and championship, where we don’t rank fighters, the fighters rank themselves by winning and advancing. And the fans have the transparency of winners advancing and losers going home. That’s what the NBA has, that’s what the NFL has, and nobody had brought that to combat sports, whether it’s boxing or MMA, ever in the 100-year history. That’s what the Professional Fighters League does.”

“They had a significant amount of fighters who were extremely good. Rather than sign fighters one and two at a time, that gave us 50 or 60 fighters to start,  so then we were able to get the season going in one year versus two or three years.”

“Right now, PFL has the broadest distribution of any MMA league. Most UFC fights are either on pay-per-view or ESPN Plus, so PFL has the broadest distribution; fans can see us all around the world the most easily. And more and more great fighters are willing to come over to the PFL to show their talents. So I think what you’ve seen is the product get better and better and better and you’ve seen the fans watch it more and more and more. And I think the expanded distribution is just a way to tell the fighters ‘Come on over to the PFL and show what you can do,’ and to tell the fans ‘Check out this product, it’s super exciting, and probably better than what you’re watching now.”

He said the international audience is a crucial part of their focus as well.

“PFL is a global sports league. Those 300 million MMA fans, 80 percent of those are outside the United States. So unlike a lot of the sports leagues that focus on the United States, MMA is truly global. The only three sports that are viewed in 150 countries are soccer, basketball, and MMA. So the PFL is truly building a global league, and the international audience is as important as the U.S. audience.”

Davis said the NYE championships are a big moment and a big step forward for his promotion.

“On New Year’s Eve at Madison Square Garden we have six weight classes, six finals, six championships up for grabs, six million dollar checks and six belts to be awarded, so it’s almost like six Super Bowls back to back to back to back to back in one night. So it’ll be the most exciting night ever in the history of MMA. There’s never been six title  championship fights in one night.  So fans of MMA should watch to see who is going to be the champion in six world title fights for life-changing money; most MMA fighters fight for between fifty and a hundred thousand dollars a fight, so six people will earn the title, six people will change their lives, and you’ll see it all happen in three hours on New
Year’s Eve on ESPN2.”

Davis said PFL has ambitious growth targets for 2020 and beyond, though.

“PFL aims to be the sixth major sports league around the world, joining the NFL, NBA, MLB, NHL and the EPL. MMA has that big of a global audience, but it’s never been put
together in a true sport format league before. MMA is 25 years old, the next youngest sport is 75 years old, that’s basketball. We want to spend the next five to ten years
building the PFL into that sixth major global sports league, with everything that entails. So you’ll see us next year launching major original programming; the PFL Challenger
series with Mark Burnett, where an unknown professional fighter becomes a real world Rocky, so somebody really wins a title shot coming from nowhere. You’ll also see us launch a new show with Mike Tyson called The New Fight Game:  think of it as Mike Tyson’s irreverent take on MMA. And you’ll continue to see us add great new fight talent. I think fans who want to see innovation and fans who want to see exciting fights should check out the PFL in 2020.”