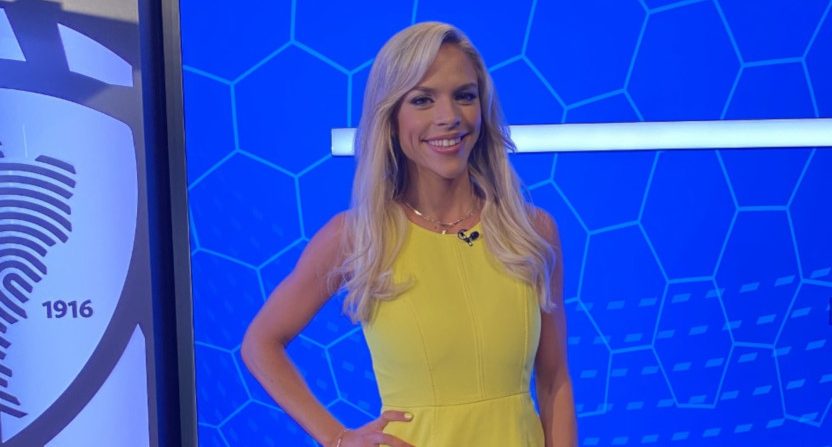 Friday at 9 p.m. ET will mark the debut of the PFL Challenger Series, part of their expansion of live events this year. That broadcast will air on fuboTV’s associated free fubo Sports Network, live from Universal Studios in Orlando, FL. Kenny Florian and Sean O’Connell will be providing play-by-play, analysis, and betting coverage of the fight, and Julie Stewart-Binks is set to serve as co-host. That will see her playing a key role with the panel of celebrity judges, including Ray Lewis, Tyron Woodley, and Jeremy Piven. Stewart-Binks spoke to AA this week about her role on this series, and said she’s thrilled to get the chance to work on a MMA broadcast:

“I’m extremely excited to do something like this because I’ve never done anything like this before, in terms of MMA. I’ve covered the sport, but I’ve never been to a fight before, and I’m really excited to be able to experience that through open eyes that have not taken that in or seen it before. I’ve covered hockey and seen a lot of fighting, but to get to experience a MMA fight up close and personal will be interesting.”

She added that the reality competition aspects of the Challenger Series add their own twists.

“The dynamic with this show is unique; this isn’t just a fighting show, this is an opportunity to change people’s lives, to win a contract that can get them into the PFL or a developmental contract. And there’s also that showmanship part of it that allows personality. ”

“People have called it “the American Idol of MMA,” and I love that idea of a reality show in this realm, bringing in so many different aspects. There’s a celebrity panel, they get to have a say in what happens. The fans get to vote through the Fanview on fuboTV, as well as on Twitter. And you have the judges, of course, who will judge the fights. So you have people that can really help sort of determine what the futures of a lot of these fighters are.”

Stewart-Binks said she was impressed by the various competitors when she spoke with them this week, and she relates to their efforts to push for a contract.

“I spoke with a lot of them this week on their fighter calls, and so many of them are so thankful to get this opportunity. They are so hungry. There’s very little ego. They’re super accessible. They want to go out there and change their lives…these guys have had to fight and claw their way to get here, and I love that type of underdog story, because that’s been my whole career in a nutshell as well, so I love seeing that.”

She said her comedy background will come in very handy in working on a show like this, as this has a lot of elements that can change partway through.

“I’ve done a lot of comedy, improv, standup, and I think a lot of those elements will be very useful in this scenario. Because we’ll be dealing with a reality show that is live. We’ll be reacting on the fly, we’ll be seeing things happen, we’ll be getting insight from really big celebrities that have a connection to MMA but might not necessarily be an expert in it. You’re going to get a lot of different insights into what is going on. So it’s kind of like you’re juggling all these things happening, and I’m really excited about that type of performance aspect of it.”

Stewart-Binks said the key thing she keeps in mind here versus with a strict sports show is that this may wind up being more unpredictable. But she said even standard sports broadcasts have proven unpredictable in the past, so that’s experience for her to build on.

“I would say it is to not lock yourself into how you think something is going to go. It’s about being extremely flexible, understanding ‘Okay, this is what we have set down in our script and our rundowns, but everything can change.’ And it’s about being super okay with the idea of anything happening. I’ve worked a lot of different broadcasts before where everything is on the fly, where you might not have highlights, where you might not be able to go to a game at a certain time. I’ve had experience with maybe filling or vamping for 20 minutes sometimes when they don’t have an element.”

She said she also tries to balance being as prepared as possible with knowing that you won’t know everything that could happen.

“I think that’s a thing to consider when you have any kind of live aspect, especially when you have so many moving parts, but I think the approach to it is when you’re under that pressure and those things happen, you know what you know. I always try to come in as prepared as I possibly can, I overprepare, I will have notes and notes and notes, but then, whatever has been on the tapes and somehow sticks to my brain, that’s going to be something that goes on air. Or something that just happens in the moment.”

Stewart-Binks said a broadcast like this is interesting too, as it’s not just her out there reacting to what happens, but her working with and building off compatriots.

“It’s a lot of listening, a lot of reacting; I mentioned a performance, but it’s a performance and reaction with other people. And again, like fighting, you can have your own set plan, but things can go awry and you have to change course a lot of the time. And I love that adrenaline-filled atmosphere.”

She said O’Connell and Florian are going to be great partners, based on her interactions with them so far.

“I just met Sean this week, but I’ve been following him for years, and he was on my show this week, Drinks With Binks. He was helping people understand what’s going on here and what the deal is. And he is so down-to-earth, and we really get along, because I think we both have that mentality that nothing in life is given, everything is earned. And of all of us who are here, that’s the mentality of everyone working on the broadcast that I’ve gotten to know.”

“And working with Kenny Florian, I was at FS1 while he was there. While we didn’t work directly together, I would be doing updates into the UFC fights that they had, and into Ultimate Fighter. So we were joking that it’s funny that we’re now working together, because we used to be in the same building and on the same broadcast.”

“George Greenberg is with the PFL, he’s the executive producer, and we worked together at FS1. So when I was told I was going to be on this and George Greenberg was going to be a part of this, I instantly definitely was excited about it, because when I went to FS1, he was one of the people who was very helpful in helping me figure out how to navigate national TV. I’d come from regional broadcasts in Canada. He was very honest, he was very fair with his assessments of my on-air abilities and how I could improve in a lot of ways, and so I was really excited to be reunited with him.”

Part of Stewart-Binks’ work Saturday will be hosting the celebrity panel, which will include former NFL star Ray Lewis and former MMA fighter Tyron Woodley in-studio, plus actor Jeremy Piven appearing remotely. She said she’s anticipating this panel bringing a lot to the table.

“I’ll be working mostly alongside them, I’ll be with the celebrity panel. We’ll have the fights, and we’ll get their insight and their input when the fighters come out. …[These contestants are] going to be judged also on their personality and their showmanship, and these guys, especially for Ray Lewis, that’s a big part of what made him such a well-known performer and player. I asked a lot of the guys about it, and this is new for them, some of the fighters, but for some of them, this is totally their jam, so they’re very excited.”

“And they’ll give the insight of ‘Hey, this guy’s got some good swagger.’ They want them to kind of amp it up and ham it up for the crowd, because that’s kind of the world we live in these days. You get rewarded for having personality and being different and standing out beyond just the fighting. And after the fights, they’ll weigh in as well on what they think.”

“And Tyron Woodley, he’s a former MMA champion, he knows the sport really well, so he can give more of a tactical analysis on stuff. And we’ll have their analysis, and then at the end, there’s four fights a night and eight fighters, so there will be four people left, and then with their insight and with the fans that get to vote on Twitter and FanView, they’ll get to select who wins a contract with PFL, whether it’s developmental or whether they go right into the fourth season.”

Stewart-Binks said that overall, she’s excited to be doing something new and different like this Challenger Series. And she thinks opportunities like this are a great thing in this current broadcasting era.

“What I love is the ability for this to be done so differently. And you’ve seen my career from literally the beginning days, you know I do not shy away from anything different. I’ve always been up for something that’s completely out of my comfort zone, always been up for something new. And I think already MMA and PFL is new for me, and this whole show is new for a lot of people. And that’s how you do things in this world now; you’ve got to be creative and different and go out on a little bit of a limb, and that’s how you get rewarded.”