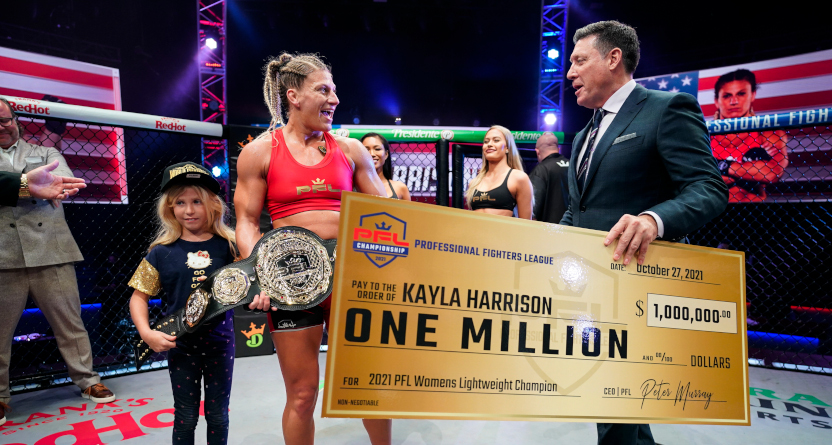 The COVID-19 pandemic impacted most sports leagues in some way, but the shift from the Professional Fighters League was perhaps particularly notable. In April 2020, they made the decision to postpone their 2020 season entirely and shift their focus to studio and film content (including the launch of their own PFL Studios brand) and preparing for 2021. And last fall, PFL CEO Peter Murray  spoke to AA about how he was optimistic the studio shift would pay off in 2021.

A year later, after the PFL 2021 season did in fact demonstrate strong ratings growth, Murray (shown at right above handing a million-dollar check to PFL women’s lightweight world champion Kayla Harrison in October) spoke to AA again. This time, he talked about how the 2020 postponement and studio shift looks in retrospective, how this season went, and about the massive live events expansion the PFL has planned for 2022. First, Murray said that they’re happy with the call they made in 2020, because it wouldn’t have been feasible to do their full season under the conditions that year (especially with their international fighter roster).

“2020 was such a difficult year for everyone, including all businesses and sports properties. We were fortunate in that COVID hit prior to the start of our season in 2020, so we made the decision to reschedule our third official season to 2021 because we wanted to really maintain the integrity of our season format and not do one-off events. We thought it was the right thing to do from that perspective, and also to keep our fighters safe; half of our fighter roster comes from around the world.”

“It was a difficult decision, but it was the right decision, and we did come out of 2020 a lot stronger with respect to raising capital, expanding the PFL management team, and improving the product, starting with signing some incredible athletes and star talent and then refining our technology, tying that to new innovations with the smart cage. So we really ticked the box on all of that.”

He said the original content launch and expansion was particularly important in keeping them in fight fans’ minds and preparing a springboard for 2021.

“Absolutely, the strategy of launching an original content division and initiative under PFL Studios worked. It gave us the opportunity to keep the brand visible on multiple platforms, in the U.S. on ESPN both linear and digital, and we distributed that content around the world. And it was during a disruptive time where there wasn’t a lot of live sports content, even ancillary content ready to go. We were ready to go.”

“We told some stories about the sport, about certainly our league and our fighters, but also icons like Randy Couture, with that four-part series where PFL Studios told Randy’s story. Even though Randy didn’t fight in the PFL, he was a six-time champion in the UFC and an icon of the sport. So that was a privilege for us to tell his story.”

And Murray said that springboard paid off in a big way.

“The season was incredible. It was our best season since we’ve launched the PFL. Every year in our early stages is meaningful as we grow, and I’m proud of the team. I’m proud that we’ve secured the number-two position in the world in the sport in every metric. We’re very proud of that.”

“And this season, we had incredible new fighter signings, and it all came down to great fights and great packaging for our season format. Our audience here in the U.S. was up 100 percent versus the 2019 season, putting us as the fastest-growing sports property period, not just in combat or MMA, but in all of sport. I think the proof is in the audience results and the quality of the fighters, the fights, and the execution.”

He said that sets them up to launch a number of new live events in 2022.

“2022’s going to be all about expanding our portfolio of live event properties. Number one, we will expand the number of events tied to our season format. Our championship will be two events versus one.”

“In addition to that, we’re going to launch other new properties. We’re going to launch the PFL Challenger Series; that will be eight consecutive live events in February and March. The PFL Challenger Series is really about pro fighters, many of whom are in the early stages of their career, who are aspiring to get to the season format or get a development deal with the PFL.”

Murray said he’s particularly excited about that PFL Challenger Series, as the digital focus there will let them use stats and integrated betting more. The series will also feature a judging and fan-vote component.

“Eight contracts will be awarded, one each night, throughout the course of those fights. There will be four fights a night on those cards. And this product is going to be really a digital-focused product, a younger-skewing audience, and we’ll integrate data and betting, real-time betting within the stream. And then combine that with a panel of judges made up of icons, MMA icons, broader icons from sports, in addition to some entertainment personalities and giving fans a vote and a say on who should get the contract. That’s a real differentiator versus other properties out there.”

Beyond that, Murray said the league also has plans for pay-per-view events, a combine, and an international qualifier series.

“We’re also going to launch pay-per-view events. And to top it off, we’re really excited about launching the first-ever MMA combine, on a scale that’s never been executed in MMA. We’ll be staging that at a world-class facility, invitation-only for more than 100 fighters, and measuring their mental and physical capability inside and outside the cage.”

“When you add that up, plus some international qualifier series events that we’ll stage outside of the U.S., you’re talking about over 30 live events coming from the PFL in 2022. So it will be a year-round activation for live events with differentiated products. We’re very excited about it. We’re really tripling down on live event content.”

The PFL decision to cancel their 2020 season had a lot to do with safety concerns around COVID-19, and while the situation there improved somewhat in 2021 thanks to the availability of vaccines, there are still plenty of ongoing challenges with the original virus and with its variants. Murray said they handled 2021 with a bubble and with no fans in the building until the championship, and while that was difficult, it was worth it.

“We put a plan in place to ensure that we could execute the season, and our team really rose to the occasion. We executed in the regular season a bubble format, very similar to the NBA, where fighters and our operational and production team were in a bubble environment to keep them safe. There was rigorous testing as well as segregation and mask-wearing. There was a lot of added expense to it all.”

“And we didn’t have fans at our regular season and playoff events. But come the championship this past October, we actually opened up the house to fans in South Florida at the Hard Rock, and it was a great night, it was great to have the fan energy in the mix again.”

Murray said it’s too soon to say if they’ll go to the bubble idea again for the 2022 season, but they’re actively keeping tabs on the COVID situation everywhere they might hold events, and they’re planning to be flexible with their responses.