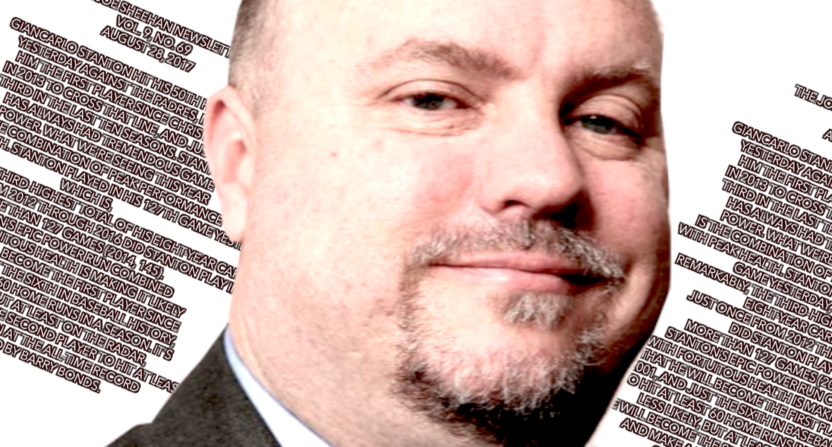 The subscription-based digital sports journalism model is having a moment. DK Pittsburgh Sports just celebrated its third birthday. The Athletic, launched last year in Chicago, has spread to six cities and hired a lineup of big-name writers for a collection of national sites. Boston Sports Journal, a venture by former Sports Illustrated writer Greg Bedard, launched this summer. And across the country, newspapers have enforced stricter paywalls to incentivize subscriptions. More and more, publications have decided that charging readers for content is the best, if not only, way to monetize online sportswriting in 2017.

The open question is, will it actually work? Can subscription-based sites compete with their free counterparts? Will consumers long accustomed to reading content for no charge suddenly start opening their wallets?

If you want reason to believe in the pay model, look no further than Joe Sheehan.

Sheehan is one of the most accomplished sabermetric baseball writers ever. He helped found Baseball Prospectus in 1995 and worked there for most of a decade and a half. He has contributed to Sports Illustrated since the late 2000s, while also landing bylines at the Washington Post, FanGraphs and, yes, The Athletic. But these days most of Sheehan’s work is available to only a select audience, about 1,700 diehards who pay $34.95 a year (or $59.95 for two years) to subscribe to the Joe Sheehan Newsletter.

The pieces Sheehan writes for his newsletter (with help only from a volunteer editor) are similar in type to ones you might find on ESPN.com or FanGraphs, but the distribution could not be more different. Instead of existing on the open web, the newsletter pops into the email inboxes of those who subscribe. That means if Sheehan writes a brilliant piece, it won’t be read by thousands and retweeted by hundreds. It means he never gets the ego trip of knowing vast amounts of people are seeing his work and registering his byline. But it also means freedom. With his newsletter, Sheehan doesn’t have to rely on Facebook’s fickle algorithms, fret about advertisers’ growing preference for videos or sweat the growth of ad-blocking plugins or the differences in mobile vs. desktop display. And most importantly, he doesn’t need to crank out quick-hit bursts at the expense of more thoughtful pieces.

Sheehan will be the first to tell you his model is not easy and that his newsletter could be doing better. But his belief in the subscriber-based journalism is strong, and it is informed by personal experience. Relying on subscribers worked when he first experimented with a newsletter in 2002. It worked when he helped institute a paywall at Baseball Prospectus shortly thereafter. And it worked in 2010 when he re-launched his newsletter and quickly grew it into a genuine livelihood.

“This is not the way to make millions of dollars,” says Sheehan’s friend, former colleague and longtime podcast partner Rany Jazayerli. “But can you make a comfortable living in the world of journalism today? Joe is proving that you can.”

Sheehan’s newsletter was born from desperation. When he left Baseball Prospectus in August 2002, he figured he would pick up freelance assignments. Instead, he endured six tough weeks without writing and began to get jumpy. So he searched his email inbox for any reader who had ever reached out to him and sent out a blast looking for people to pay a few dollars for an email newsletter. More than 200 signed up.

That initial incarnation of the newsletter didn’t last long. Sheehan soon returned to BP, right as the site announced BP Premium and hid much of its content behind a paywall, and he became a driving force and marquee name behind one of the most prominent subscription-based digital media outlets in the country. Then in late 2009, he left BP again, in a split he describes as mutual, and once more he was without a place to write consistently. By that time Sheehan was working on the side for SI, and he hoped that gig might grow into a full-time job. But in the spring of 2010, his girlfriend gave birth to his daughter Marina, and he figured it was time to give the newsletter another try. So he sent out a mass email, promoted his new venture on Twitter and quickly roped in more than 700 subscribers.

Over the years, Sheehan explored staff writer positions at established publications—he was passed over for Dave Schoenfeld at ESPN and never got too far in talks with Grantland—but failed to find a fulltime gig. Meanwhile, his assignments from SI began to slow, and his newsletter continued to grow.

“Fast forward a few years and all of a sudden you look up and the newsletter is 12, 13, 1500 people,” he recalls. “Other stuff is starting to fall by the wayside. It’s like, This is actually my job. It was gonna be the thing I did until the next thing came along, and all of a sudden this is what I do.”

Sheehan still writes for SI and The Athletic on the side, but his focus is on serving his newsletter subscribers. At age 46, he has no illusions of grandeur. He knows he’ll never be the star columnist or the fat-salaried TV commentator. His dream for the newsletter is not 100,000 subscribers but a modest 5,000. But if you multiply his current 1,700 subscribers by their $35-a-year fees and factor in his freelance work, it’s clear he is getting by just fine, while choosing his hours and serving as his own boss. The model is working.

That Sheehan has convinced readers to pay in a market full of free content is a testament to his reputation, his network and, of course, his ability. Sheehan is aware of his strengths and weaknesses. He focuses his analysis on teams and leagues more than players, because that’s what he learned in the ‘90s and ‘00s, before the days of GIFs and Statcast. He is mostly content to leave swing breakdowns and pitch-mix analyses to younger writers more versed in those areas. Sheehan doesn’t want you to read him instead of, say, FanGraphs, he wants you to read him in addition to FanGraphs.

“I would never sit there and say I’m better than so and so,” he says. “I’m different.”

Sheehan sees his writing ability as the main differentiator between himself and other baseball analysts, who might be better at math but worse at words. Still, standing out in an increasingly crowded marketplace is not easy. What really makes Sheehan worth reading, Jazayerli says, is his willingness to take positions that buck sabermetric orthodoxy or alienate a portion of the baseball audience. When the two hosted their popular “Baseball Show with Rany and Joe” podcast, Jazayerli would often take what he calls the “mainstream sabermetric view,” while Sheehan would develop his own carefully considered perspective.

“If there’s a trade, and one site thinks it’s a steal for one team, most writers are going to agree with that,” Jazayerli says. “If you want someone who, whether a deliberate choice or just his personality, manages to avoid the pitfall of groupthink, that’s the value of Joe. I don’t think you can get a truly diverse set of opinions within the sabermetric world without reading Joe’s stuff.”

Sheehan’s call-it-like-he-sees-it attitude gets him in trouble sometimes—for example, his skepticism about the impact of performance-enhancing drugs never goes over well, and a piece he wrote about the slim odds of a woman making the Majors rubbed some people the wrong way—but in the end it’s his defining characteristic.

Of course, there’s danger in taking unpopular stances when your livelihood comes from subscribers. Sheehan is not shy about feelings toward the man in the White House, and it’s certainly possible that dissing Donald Trump on Twitter has turned away potential customers. He says he doesn’t let those considerations affect how he tweets, but he also says the only reason he’s on Twitter at all is because it helps him sell subscriptions. Because his model requires constant marketing, Sheehan posts regularly on Facebook, spends his Tuesdays cycling through radio appearances around the country and devises periodic promotions to draw readers to the newsletter. It’s all part of the job.

Sheehan worries a bit about the analytics world passing him by. It’s tough to remain on the cutting edge when your view of a fast-moving sport is rooted into 20-year-old frameworks. But he has committed to keeping up, pledging to be more like Peter Gammons, a veteran writer who has embraced new-age wisdom, and less like Murray Chass, an old-school scribe who has rebelled against it. And if one day the market decides it no longer has use for a 40-something stathead pioneer, well, that will be that.

“I don’t sit there and worry that someone’s going to choose X over Y,” Sheehan says. “Because if it happens, I’ll see it in the numbers, and then I have to decide what I’m going to do in my 50s. My goal is to write really great content, service the people I have and bring in the people I don’t have. And if that’s not gonna be good enough, that’s on me. It’s not on the readers.”

In 2017, the sports media industry at large is weighing the same questions Sheehan, Jazayerli and others at BP faced a decade and a half ago. Is sportswriting for professionals or hobbyists? Can you remain relevant behind a paywall? If you do put up a paywall, how much content do you give away for free?

BP has had significant ups and downs, but 21 years after it was founded and 14 years after it introduced BP Premium, it’s still around. So is Sheehan’s newsletter, seven years after it launched with no real template to rely on.

Sheehan is optimistic about the flurry of subscription-based sites to hit the web recently but hesitates to make too bold of a prediction for the industry. For one thing, he’s skeptical that anyone between the age of 25 and 40—who he refers to as “the Napster Generation”—will ever pay for content. For another, it’s simply too early. Just as he’s famously slow to believe baseball players’ early-season performance is indicative of their true talent, he won’t read too much into The Athletic’s recent run of big hires and good publicity. He treats questions about the future of the industry the way he treats requests to project Aaron Judge’s career midway through the outfielder’s rookie season.

Every so often, Sheehan sends out an update on the newsletter’s growth and his outlook for its future. In his most recent state-of-the-newsletter update, distributed last December, he acknowledged that most readers likely don’t care how many subscribers he has but wrote that he makes the numbers public “as proof of concept.” Then he signed off with the newsletter’s unofficial motto: “Individuals will recognize and support quality if given that option.”