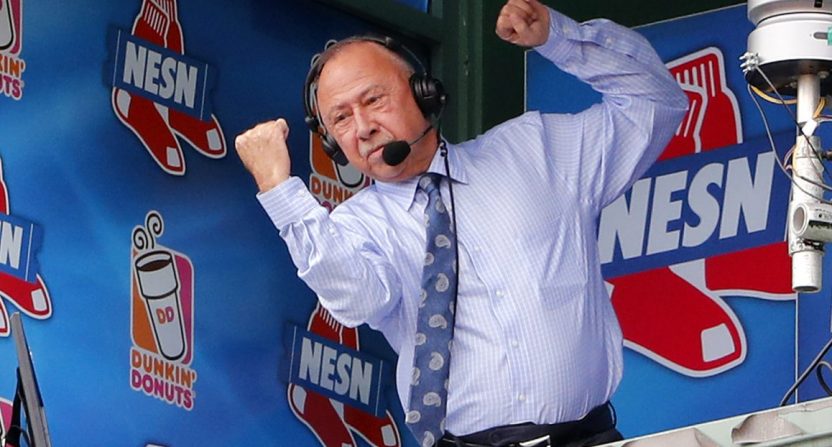 Longtime Boston Red Sox broadcaster Jerry Remy has passed away at 68 years old. The news was first reported by WCVB-TV.

Remy had endured repeated struggles with lung cancer for years, undergoing treatment seven times for the disease. Earlier this year, he left the NESN broadcast booth after experiencing shortness of breath and did not return for the remainder of the Red Sox’s 2021 season.

Following a 10-year career as a major-league infielder — six of those seasons with Boston — Remy became a broadcaster in 1988, doing color commentary for Red Sox telecasts on NESN. Calling games didn’t come naturally to him at first, as he explained to the Boston Globe‘s Gordon Edes in 2004.

NewsCenter 5 has learned that beloved #Boston Red Sox broadcaster and former player Jerry Remy has died. He was 68 years old and in the middle of his 7th cancer battle. Rest in peace, Jerry. ? #RemDawg #RIP #RedSox #baseball #MLB pic.twitter.com/gu5coKz5Lb

But with the help of legendary play-by-play broadcaster Ned Martin, Remy became more comfortable at the mic and went on to become an institution in the Red Sox broadcast booth. During his 33 years calling Boston baseball games, he worked with several play-by-play partners including Martin, Sean McDonough, Don Orsillo, and Dave O’Brien.

With Orsillo in 2007, Remy made what might be his most famous call, describing a fan tossing a slice of pizza at a fellow Fenway Park spectator after a foul ball went into the left-field stands.

“I can’t circle it, I don’t have my telestrator, but here comes the pizza!” said Remy, between laughs. “Of course, he’s been asked to leave the ballgame for ruining a good piece of pizza. Here’s one more look in slow motion, if we can…”

A Fall River, Massachusetts native who grew up in Somerset, Remy sounded just like the people who were watching Red Sox games, adding a sense of authenticity to the telecasts and reinforcing the feeling that he was one of them, devotedly following their favorite baseball team.

This is one of my favorite Jerry Remy moments in the Red Sox broadcast booth. pic.twitter.com/EHsTBgQ587

Remy became as popular in the community as any broadcaster ever would, dubbed “RemDawg” by McDonough after the Red Sox teams of the late ’90s were affectionately known as the “Dirt Dogs.” He started The Remy Report website that ran news stories and a message board, in addition to selling merchandise like t-shirts, mugs, and the scorecards Remy would fill out from each game. Jerry Remy’s Sports Bar and Grill also opened up several locations throughout the region.

As seen in the clips we’ve included here, Remy had a great sense of humor, willing to poke fun at himself or whatever NESN cameras happened to show in the stands on a particular night. Having fun is a necessary part of the job for broadcasters and the viewing audience when there are 162 games to follow during a season.

Remy was first diagnosed with cancer in November 2008 and underwent surgery to remove a small portion of his lung. It was one of seven times he required treatment for lung cancer, the most recent of them in August 2018. A smoker since his teenage days, Remy used his platform and high profile to encourage people to stop smoking. He was also open about the depression he experienced during those early treatments.

“Before, the depression was harder than the cancer was,” Remy said in 2009 (via the Globe‘s Chad Finn). “The timing was a lot of it because I was missing games and that bothered me.”

Remy returned to Fenway Park one last time this past season to throw out the ceremonial first pitch before the Red Sox’s AL Wild Card playoff game versus the rival New York Yankees on Oct. 5.

He is survived by his wife Phoebe, sons Jared and Jordan, and daughter Jenna.