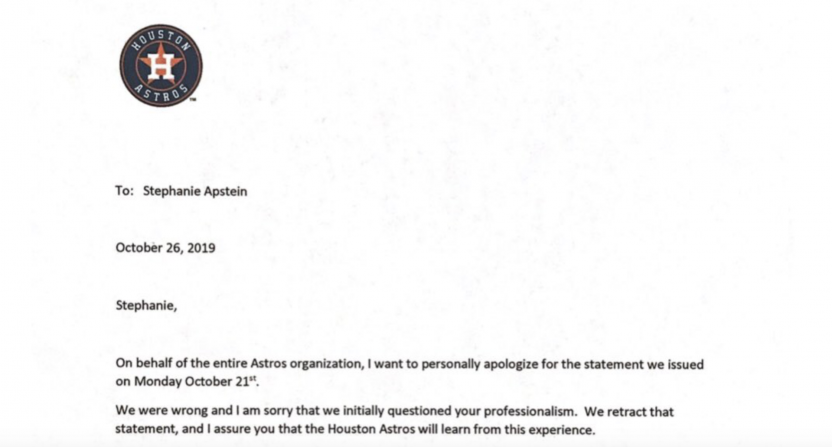 The Houston Astros’ PR strategy over the past week has been terrible. Since the initial report that (now former) Astros assistant GM Brandon Taubman profanely praised Roberto Osuna, who had been suspended 75 games for violating MLB’s domestic violence policy, the Astros denied Sports Illustrated reporter Stephanie Apstein’s story of what happened and called it “misleading and completely irresponsible” and “an attempt to fabricate a story where one does not exist,” even though many who were there supported Apstein’s recollection of events.

After about a week of one Astros PR blunder after another, Apstein revealed that Astros team owner Jim Crane sent her a letter apologizing for their initial remarks and retracted their statement criticizing Apstein’s professionalism.

Astros owner Jim Crane sent me a letter on Saturday retracting the team’s original statement about my story. “We were wrong.”https://t.co/arvGceF4To pic.twitter.com/bw2TZI3fh2

How we got from what originally happened to now has been quite a doozy. After Apstein’s initial story and Houston’s subsequent denial, it came out that Taubman reportedly targeted a female reporter who was wearing a domestic violence awareness bracelet in that outburst. When the Astros fired Taubman, they put out a “sorry if you were offended” non-apology that looked nice but didn’t have much substance. After that, GM Jeff Luhnow revealed that he didn’t have the time to reach out to Apstein personally (even though she was in the room when he said that) and that many people within the team saw the initial damning accusation. Luhnow then met with Apstein but didn’t commit to retracting their initial incorrect remarks on Apstein or SI.

That has led us to Crane finally apologizing for what happened and retracting what they said about SI and Apstein. If this had happened right after the incident, the Astros could’ve saved a lot of criticism and bad press and something else would have dominated the headlines by now. Now, it has remained a story and might result in further penalties for Taubman and the Astros from Major League Baseball.

Crane said in his letter to Apstein that the team “will learn from this experience.” No one can change the past but let’s hope he and the team take those words to heart and learn how to handle an employee doing the wrong thing as well as handling a PR crisis off a self-inflicted mistake.