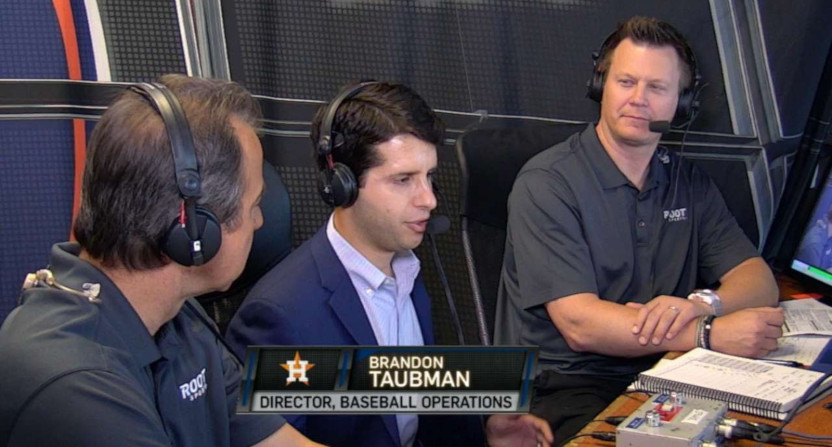 Five days after Houston Astros’ assistant general manager Brandon Taubman yelled “Thank God we got Osuna! I’m so fucking glad we got Osuna!” several times at a group of female reporters Saturday, he’s now been fired. The Astros were initially incredibly defensive when Sports Illustrated‘s Stephanie Apstein reported on those comments Monday, digging themselves deeper with a statement calling SI’s story “misleading and extremely irresponsible” and saying “His comments had everything to do about the game situation that just occurred and nothing else — they were also not directed toward any specific reporters. We are extremely disappointed in Sports Illustrated’s attempt to fabricate a story where one does not exist.”

However, multiple other reporters corroborated Apstein’s account Monday. And on Tuesday, the team and Taubman put out statements with halfhearted quasi-apologies, with Taubman saying “I am sorry if anyone was offended by my actions” and “My overexuberance in support of a player has been misinterpreted as a demonstration of a regressive attitude about an important social issue.” Neither of those statements included an apology to Apstein or SI, though, and the Astros then managed to look even worse thanks to reporting from NPR’s David Folkenflik that no player was being interviewed at the time (contrary to the Astros’ claims) and that Taubman’s comments were directly targeted at one female reporter who had tweeted about domestic violence in the past. Two days after that, the Astros have now fired Taubman and apologized to Apstein and SI:

That statement’s a lot better than the previous ones, especially as it now includes the apology to Apstein and SI that was sorely lacking earlier. And the firing of Taubman over this is interesting; there haven’t been a lot of people in sports specifically fired for their comments. Some of the few examples where that has happened include Ozzie Guillen (fired by the Marlins in October 2012, at least partly over remarks he made that April about Fidel Castro), Marge Schott (finally forced by MLB to sell majority control of the Reds in 1999, over six years after a whole lot of racist controversies first came to light in a lawsuit), and Donald Sterling (forced out and banned for life by the NBA in April 2014, only days after his racist comments came to life). But usually, comments alone haven’t resulted in firings. There’s certainly an argument that’s deserved in this case, though, given the way this behavior was targeted at a specific reporter, given the threatening tone of it, given the way Taubman’s defenses didn’t hold up to scrutiny, and given the light his actions cast upon the team.

A big question here is if there will be any further organizational changes, though, especially on the PR front. The Astros may now have gotten rid of the public face of this controversy, and the person who actually made the comments in question, but the PR team that decided to respond to this by accusing SI of “an attempt to fabricate a story” and didn’t apologize for three further days is still in place. And the team’s reaction to this was a huge part of what made it such a massive story and such a problematic event; if they’d immediately apologized, they’d have looked a lot better. Instead, they questioned the credibility of a journalist and a media organization, and they were proven wrong publicly and dramatically. We’ll see if that leads to any changes in how they handle PR in the future.