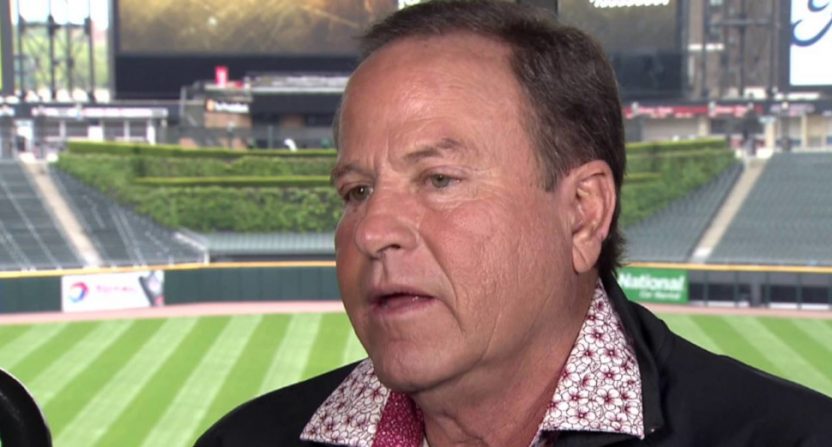 Predicting plays has become a big focus in sports broadcasting lately, with CBS NFL analyst Tony Romo gaining plaudits for doing it (at around a 68 percent rate) this fall and ESPN MLB analyst Alex Rodriguez not succeeding as well. Both of those came from observations and patterns, though, and NBC Sports Chicago White Sox analyst Steve Stone apparently has a different approach. Stone told Steve Greenberg of The Chicago Sun-Times he knows what’s going to happen because…he’s psychic?

“I’ve been psychic my whole life. It sounds really strange, and, if I play it up, people will laugh because nobody’s always right. I know it sounds strange, but I really know what’s going to happen.”

Okay, anyone can claim that. But there’s some evidence to back it up from Stone’s on-air partner, play-by-play broadcaster Jason Benetti:

…“I am not a huge believer in the extra-sensory,” Benetti said. “However, at points it is difficult for me not to be, because there are times when Steve will, before something happens, take a piece of paper and write down what’s going to happen. I see him do it. After the play, he will flip it over and it will be what happened. I’m a skeptic about a lot of things like that, but it’s hard not to get a little bit of a tingle down your arm when somebody does something like that as frequently as he does.”

…“It’s not a couple of times in three seasons-plus,” Benetti said. “It’s a couple dozen times. I have no idea what haunts his soul, lives in his brain. Somebody in Hollywood has missed out on optioning a film about this. I’m hard to convince about this, but I’ve seen it enough that I can believe that he sees things.”

Benetti called Stone “Shaman Steve” in a recent video posted to Twitter. Incredibly — believably? — he claims Stone has yet to be wrong with one of his paper tricks, and that he’d have spotted any botched prediction in this regard because the space between them in the booth is a matter of inches, not feet.

“He’s got a lot of occult in him,” Benetti said. “I’m weirded out by it, but I also kind of adore it. Of all the people I’ve met, I would say he’s the most likely to be psychic.”

Greenberg’s piece includes Stone mentioning he doesn’t often predict things on-air because he doesn’t want to be blamed when they turn out poorly for the White Sox, and it includes two specific examples of Stone’s predictions; Juan Uribe’s 13th-inning walk-off home run in 2007 during Stone’s first White Sox broadcast (which he said was coming to both WGN director Jim Angio and play-by-play broadcaster Ken “Hawk” Harrelson), and Alex Gordon breaking up a Lucas Giolito no-hitter this season. Of course, none of that necessarily proves that Stone is psychic, but it’s certainly interesting to hear Benetti supporting his case.

The whole piece is an interesting read, as it details Stone’s playing career (including challenging Willie Mays during batting practice as a rookie with the Giants in 1971), his path to restaurant ownership (he has a stake in 29 different restaurants through a long-running partnership with Rich Melman), his long broadcasting career with the Cubs and White Sox, his belief in reincarnation, and his comparison of psychic abilities to primitive humans deciding if they could trust each other to share the rewards of a sabertooth tiger kill. “I’ve got to figure out if you have a black hat or a white hat, and I’ve got to figure it out immediately. I try to listen to the inner voice.” Well, that inner voice certainly seems to have given Stone some advance insight into particular baseball plays. Now, if only he’d share his predictions with the audience more…