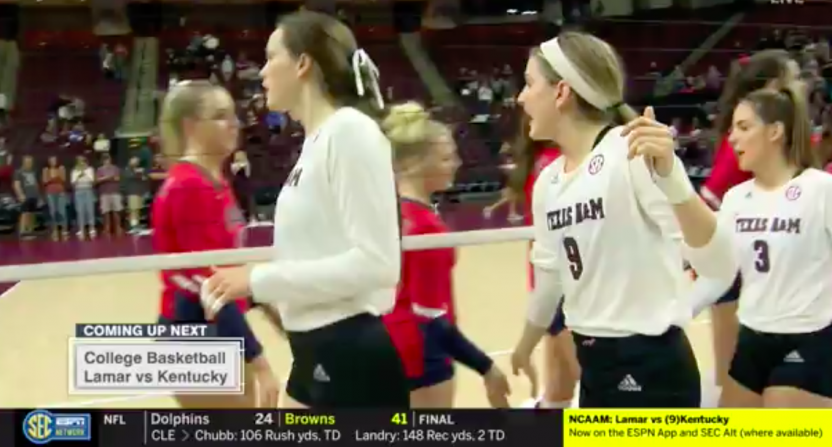 It has not been an easy season so far for Big Blue Nation watching their beloved Kentucky Wildcats on TV. They had to watch their highly-ranked squad lose at home to Evansville. Then they got a scare from Utah State in the next game, prompting some soul searching. They seem to have righted the ship and are, as of the time of this writing, putting their expected beatdown on Lamar in another early season match-up. It’s the kind of palate-cleansing game Kentucky fans need to see.

But for many of them, they didn’t get to see most of the first half.

The SEC Network scheduled the Kentucky-Lamar game for a 6:00 p.m. start, but that broadcast was dependant on the finish of the lead-in programming. That prior broadcast, an SEC volleyball match between Ole Miss and Texas A&M, was running fairly long. That means when Kentucky and Lamar tipped, the SEC Network was still in the midst of a volleyball broadcast that wasn’t going to end anytime soon.

The good news for Kentucky fans is that SEC Network has a bunch of alternate channels set up for just such an occasion. The bad news is that those channels aren’t always easy to find and many cable subscribers don’t have them.

You can see where this is going.

SEC NETWORK YOU SUCK. You should schedule your events a hell of a lot better. This us the second time this year that we are not getting to watch the Kentucky basketball game from the top off. There is no excuse for this. Move the volleyball game to the alternate channel.

SEC Network is the absolute worst at balancing which games are going to get more views. No reason Kentucky basketball should be pushed to the alternate. That’d be like ESPN bumping Bama football to ESPN+

VOLLEYBALL ACTION @SECNetwork Yay a fifth set. I didn't want to see Kentucky Basketball, nope not at all

@SECNetwork why don’t you move this pointless volleyball game that no one gives a fuck about to your app instead of showing the Kentucky game on a platform that two people can access?

Some Kentucky fans were able to locate the game on one of the alternate channels, but if the Twitter reactions act as a sample size, it’s a pretty small number.

OK … SEC A network… got it , found it ! ??? Kentucky Basketball @SECNetwork pic.twitter.com/nSNSEHHgK6

The volleyball match did eventually end and the broadcast moved over, but at that point, there were only a little over eight minutes left in the first half. For a die-hard Kentucky fan sweating it out until then, that’s an eternity.

The announcer saying “we welcome those of you who have been watching volleyball” is probably happy he didn’t have to do that in person.

For better or worse, this is a situation that Kentucky fans and SEC basketball fans, in general, should get used to. You can certainly make your case that a Kentucky basketball game is more “important” but it’s also not the Kentucky Network. SEC Network has clearly tried to set up a system that pleases everyone, and we all know how that works out in the end.

Kentucky fans may want to commiserate with Nebraska football fans (if that’s possible). They’ve been dealing with a steady dose of football action over on Fox Business Network as their games have been pushed off FS1 and FS2 a few times this year.

Each network and broadcaster has its own system for trying to be everything to everyone. Clearly some are succeeding more than others. The SEC Network shouldn’t just write off this instance as a case of bad luck. If it keeps happening, eventually, it’s going to make an enemy out of BBN. And you really don’t want to do that…